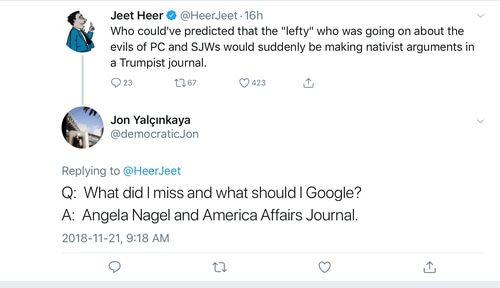 The Left Comes For Angela Nagle

Angela Nagle, best known for her 2017 book Kill All Normies Online culture wars from 4chan and Tumblr to Trump and the alt-right, recently wrote an essay, The Left Case against Open Borders, for none other than the Trumpian journal American Affairs. The Left itself, in turn, has reacted with much opprobrium:

Who could've predicted that the "lefty" who was going on about the evils of PC and SJWs would suddenly be making nativist arguments in a Trumpist journal.

everything Angela Nagle says is a moral and pragmatic disaster for the left. She should be mocked when she prints this bilge, and left outlets who give her a platform and defend her should be mocked as well.

If you search “Angela Nagle” on Twitter right now, you will get thousands of results since the essay was published, nearly all of which express indignant rage at Nagle’s heresy. This is not the first time Nagle has courted anger from her own camp, indeed, she abandoned Twitter some time ago because her very presence on the platform was simply fueling the fire so often directed at her.

Of course, the Leftists piling on invective and rolling their eyes at Nagle are short on refutations of her essay’s arguments. The only one I have seen, in short, argues that we needn’t have immigration control to protect wages or labor rights in any one country (one of Nagle’s central arguments) because instead the Left should simply take over every country and provide high-quality wages and rights for every worker everywhere, effectively neutralizing any negative aspect of labor migration. While this may be true in the abstract, it is not exactly realistic or practicable. Every other argument consists merely of accusing Nagle of being a secret fascist, racist, etc.

But that is the very nature of the Left itself: if you make an argument they do not like, you are called a racist, which is the worst thing one can be, and then the argument ends.

In her essay, Nagle focuses on how immigration hurts poor workers in the receiving country, and causes cataclysmic brain-drains in the global south. She explicitly deplores the tactics of ICE, and eschews questions of race entirely. Her practical solutions are to penalize employers of illegal immigrants (while leaving the immigrants themselves alone) and to have the West address the “root causes” of migration from the global south—especially when it comes to unbalanced trade agreements.

The word “deport” does not appear in the essay, and she notes explicitly

"... it is easy to see why the Left wants to defend illegal migrants against being targeted and victimized. And it should. But acting on the correct moral impulse to defend the human dignity of migrants, the Left has ended up pulling the front line too far back, effectively defending the exploitative system of migration itself.”

The essay is exactly what it promises to be, a left-wing case against open borders—not even against immigration entirely, just massive unmonitored immigration. Moreover, Nagle has essentially no power to do anything about immigration. She is a just a lone writer who penned one essay about this topic for a small journal read almost entirely by Rightists.

None of this matters, she has touched a third rail, so it is all just “point and sputter,” even against one of their own, from here on out.

Being in the Dissident Right isn’t always easy, but man, it sure beats that.