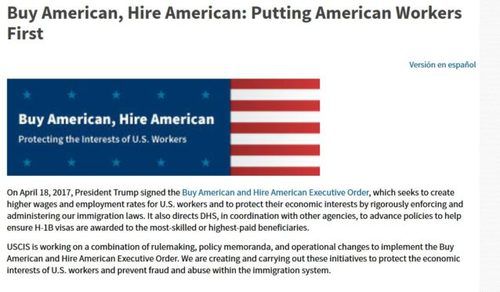 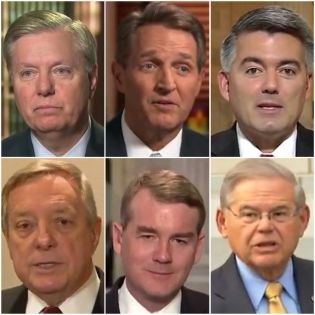 As I go to pixel, the congresscritters are still fighting over whether to close down the federal government in the name of 800,000 illegal aliens. I'll leave you to find out the result in tomorrow morning's news.

As I noted last week, the standard of debate over immigration is higher than it used to be—better for sure than it was in the previous recent attempts at immigration legislation in 2006, 2007, and 2013. I'd like to think that we here at VDARE.com have had something to do with that.

But the so-called Gang of Six bill, the attempted Senate solution, was still advertised brightly as "bipartisan." Uh-oh.

The "six" in "Gang of Six" are six senators, three Republicans and three Democrats. To be precise they are Republican Senators Lindsey Graham (SC), Jeff Flake (AZ), Cory Gardner (CO), and Democratic Senators Dick Durbin (IL), Michael Bennet (CO) and Robert Menendez (NJ). [New Gang of Six ‘Bipartisan Deal’ on DACA Amnesty Is Not Serious, By Jessica Vaughan, CNS, January 15, 2018]  As is my habit I shall just read off to you the NumbersUSA grades for those senators on immigration votes in the Senate, 2015-2018: F-minus, C-minus, D-minus, F, F-minus, F. The median grade there is F.

What did it propose to do, this Gang of Six bill? Executive summary: It offered the same bait-and-switch as the old Gang of Eight Rubio-Schumer effort five years ago. Permanent residency leading to citizenship for Dreamers, temporary—and we know what "temporary" means in an immigration context, don't we?—temporary status for their parents, promises of improvements to border security …

Jessica Vaughan at the Center for Immigration Studies summarized the aim of the bill in the CNS story cited above: "maximum amnesty, minimum border security and no cuts to legal immigration,"

The Gang of Six bill claimed to end the Diversity Visa lottery, but when you read the fine print it didn't reduce numbers, nor even the diversity idea. Instead of a lottery, half the visas were to go to those same countries, the ones thought to bring in maximum diversity, but now on a merit basis, while the other half were to go to the Temporary Protected Status aliens.

Merit-based immigration is in fact the new fad. The proposed House solution incorporated it, too. This was not the Gang of Six Senate bill; this was a different thing, properly the Securing America's Future Act of 2018. It also had six proposers: Bob Goodlatte (VA), Mike McCaul (TX), Raul Labrador (ID), Martha McSally (AZ), Jim Sensenbrenner (WI), and John Carter (TX). Here are their NumbersUSA grades on recent immigration votes: A, B-plus, A-plus, D, B, B, for a median grade B to B-plus.

As you'd expect, this House bill was more realistic. It really ended the Diversity Visa lottery but distributes those 55,000 lottery visas to the skilled employment-based visa category.

Merit-based immigration, at any rate below the Nobel Prize level, is still just a cheap labor racket, though. 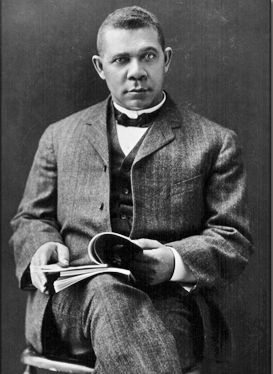 We have all the skilled people we need. The U.S. population passed the 200-million mark late in November 1968, a few months before we landed men on the Moon. If we could land men on the Moon with just 200 million people here, what can't we do with 320 million?

To those of the white race who look to the incoming of those of foreign birth and strange tongue and habits for the prosperity of the South, were I permitted I would repeat what I say to my own race, "Cast down your bucket where you are."

Washington was of course making a plea to employers to hire black Americans rather than immigrants. The same plea, in a broader sense, can be made today: Let's staff our offices and workshops from our own people—American people—of whom there are surely enough to keep a modern economy thriving.

Let's confront the cheap-labor racketeers with Booker T. Washington's slogan: "Cast down your bucket where you are!"

And let's ask those racketeers, too, where the morality lies in strip-mining poor countries of their smart people. Last week, I mentioned the failure of Haiti to build and keep sewage treatment plants. One cause of that failure is that the small proportion of Haiti's population capable of maintaining a modern plant in operation all left the country years ago to come to the U.S.A.

So tell me how our immigration policy helps Haiti?

Immigration enthusiasts love to moralize about how good and noble we are to let so many people in. With this new fad for merit-based immigration, you can put the adjective "skilled" in front of "people." One more skilled person settling in the U.S.A., though, is one less to keep things running in Haiti, or Ghana, or El Salvador. Why does no-one ever make this point to the open-borders people?

Let me end with everybody's favorite story of the week: the Dutch lady who was denied Swiss citizenship because she's too annoying.

This is 42-year-old Nancy Holten, who's been living in Switzerland since she was eight years old and has children who are Swiss citizens. Ms. Holten applied for Swiss citizenship herself, but was turned down. 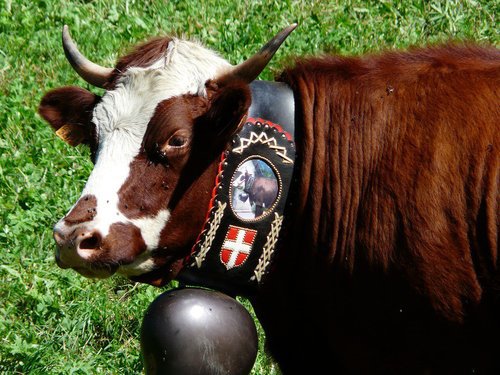 In Switzerland, to be naturalized as a citizen you have to get the approval of your district. In Ms. Holten's district, she is very unpopular. She's an animal rights activist, you see, and it's a country district with lots of cows. Ms. Holten has campaigned against the use of cowbells, which she says are too loud. Quote from her: "The sound that cow bells make is a hundred decibels. It is comparable with a pneumatic drill. We wouldn't want such a thing hanging close to our ears, would we?" [Left-wing Dutch vegan who moved to Switzerland is denied a Swiss passport because she is too annoying, By Kelly Mclaughlin, January 10,2017]

The lady's physics is a little off. The Industrial Noise Control website does indeed list a hundred decibels as “Jet take-off (at 305 meters), use of outboard motor, power lawn mower, motorcycle, farm tractor, jackhammer, garbage truck;” but, I dunno, cowbells don't seem to me to belong in that list. Even if they do, her concern is how loud it sounds to the cow.

You have to love the concept, though, of denying citizenship to someone for being annoying.

There's the solution to the DACA issue right there. This whole DACA fuss has been annoying the hell out of me.