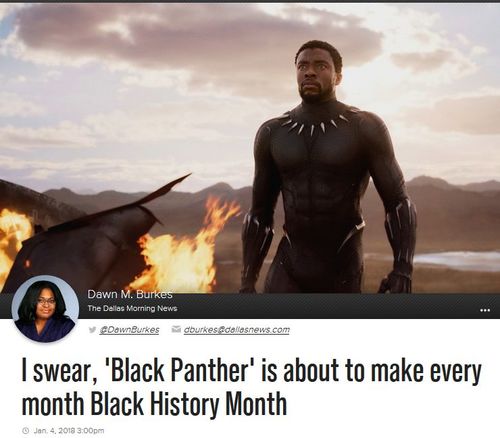 President Trump’s alleged comments about not wanting immigrants from “sh*thole” countries like Haiti caused hyperventilation in the Main Stream Media: No Leftist reporters want Americans knowing about the reality of life in the Third World that these immigrants will bring with them. Right on cue, America is about to get a dose of lying fantasy in the form of the much-touted upcoming Black Panther movie, when the science fiction black country of “Wakanda” comes to the screen February 16, just in time for Black History Month. [I Swear, ‘Black Panther’ is about to make every month Black History Month, by Dawn Burkes, Guide Live, January 4, 2018]

Black Panther is a black power fantasy in which the mythical African kingdom boasts the most advanced technology in the world. Of course, actually creating the fictional realm of Wakanda falls to the mostly white companies involved in special effects, including Industrial Light & Magic [Black Panther, by Vincent Frei, Art of VFX, January 9, 2018]. But the people on the screen and behind the camera who will garner the glory are overwhelmingly black.

Disney’s first Marvel Cinematic Universe (MCU) movie of the year will boast an almost all-black cast, a black director, a budget well north of $100 million, and storyline replete with black power and “Afrofuturism.” Marvel studio head Kevin Feige bragged “90 percent of the cast is either African or African American”. [Black Panther: Majority of Cast Will Be ‘African or African-American,’ by Molly Freeman, Screen Rant, May 13, 2016]

Significantly, Wakanda is framed as a direct response to “stereotypes” that Africa is undeveloped and primitive:

In the trailer … we see a white man… describing the most common stereotypes about countries in Africa. Soon he is asked about what knows of Wakanda, and we see visuals of a place the interviewee calls “El Dorado” and how it is not in South America — it is in Africa and it’s actually Wakanda. He proceeds to explain how anyone who had gone to “explore” it did not come out alive.

That right there in just two minutes drops the trope of defenseless Africans who need help and shows what African countries could have been without its colonization. Where instead of showing a story of a white hero who comes to aid the people it shows those who have hidden their culture to keep it safe.

[The ‘Black Panther’ Trailer Shows What Africa Would Have Been If White People Didn’t Destroy It, by Nomaris Garcia Rivera, Affinity, June 11, 2017]

So the myth that the misfortune of Africa (and by extension all blacks) is solely due to whites will be getting some cinematic reinforcement. And as you might guess, the film’s main booster was Nate Moore, the sole black producer in Marvel’s film division. [The Man Who Put Marvel In The Black, by Kelley Carter, FiveThirtyEight, May 17, 2016]

Black producer—black director—an overwhelmingly black audience. As a marketing strategy, it may work, as the move is already outperforming all other MCU films in presales. [‘Black Panther’ outsells all Marvel films in first 24 hours of ticket presales, MarketWatch, January 10, 2018]

And it’s being interpreted in political terms, as proof of black (consumer) power, with the MSM gleefully assisting Marvel’s marketing campaign:

“Black Panther” viewing parties are being scheduled around the country for its February release, smack dab in the middle of Black History Month. Clothing lines are being designed around the bright colors and Afrofuturism styles of Wakanda. And Grammy-winning rapper Kendrick Lamar was just named to produce the soundtrack.

“What is significant now, however, is that this age of convergence of film franchises with social media, a black superhero movie with an almost all-black cast conveys power, that we have arrived. It’s evolution,” said Christopher Chambers, a Georgetown University media studies professor.

Buying tickets for the film is even being defended as a charitable cause:

And a New York man wants to make sure a key demographic doesn't miss out on the African superhero's exploits: kids of color.

[Black marketing consultant] Fredrick Joseph has started a GoFundMe campaign so kids in Harlem, New York, can go see the movie when it comes out next month.

And thanks to some big-name celebrities, the "Wakanda Forever!" campaign is growing faster than a speeding bullet.

"I knew I wanted to do something for the children, especially of Harlem, because it was a community primarily of color," Joseph, 29, told CNN. "I said to myself, how can I get as many children as possible to see this film and see themselves as a superhero or a king or queen?"

"Representation and inclusion are legitimately essential pillars to creating dreams for yourself," he added.

For American civic nationalists, Black Panther is an ominous sign. Like the National Football League, the movie industry is another American institution that seems to be dividing along racial lines, with whites alone being warned away from embracing racial identity. The effectiveness of Black Panther’s pro-black marketing strategy is a startling contrast to how whites react to pop culture: they generally don’t base their self-worth off films and are actively discouraged from “seeing themselves” as mythical heroes. Significantly, MCU’s treatment of “Thor,” the hero based on the Northern European god, featured a multicultural Asgard with black Nordic deities. [The End of White Celebrity, by Gregory Hood, American Renaissance, November 17, 2017]

Now the double standard of American racial politics is in your local movie theater.

It would be one thing if Wakanda was simply a flight into fancy. But journalists and activists seem to be taking it seriously, believing it has importance for real world politics. Unfortunately, the reality of black run nations is Zimbabwe, not Wakanda. And if Americans are foolish enough to confuse Hollywood’s delusions with real life, we won’t end up with an “Afro-futurist” paradise—but a country that will look like a larger version of Baltimore.