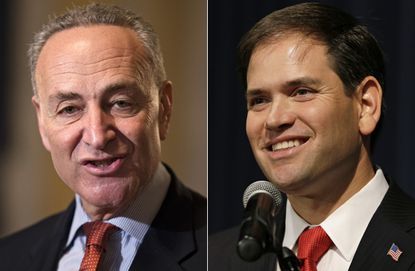 Schumer vs. Rubio: Which One Looks Smarter?

Back in 2013, I blogged quite a bit on the bipartisan Gang of Eight’s amnesty bill that was supposed to solve the GOP’s Hispanic problem forever, especially on the Chuck Schumer v. Marco Rubio matchup of strategy skills. As an electoral bill, Schumer-Rubio had to be a zero sum game: the beneficiaries at the polls would be either the Democrats or the Republicans. Looking at Schumer and Rubio, who do you think would have outsmarted whom?

Lately, that perspective has gone national. From the NYT:

Republicans have put his face in their campaign commercials and spat his name as an insult on the debate stage. Presidential candidates and talk-radio hosts have invoked him as a kind of comic-book villain, thwarting Republicans at every turn.

For Mr. Schumer, it reflects a new stage in his career: Over the course of his four decades in politics, Mr. Schumer has steadily transformed himself from an overeager Brooklyn congressman and cable-television personality into one of his party’s chief political strategists and a powerful Washington deal maker. He is expected to take over as the Senate Democratic leader this year, after Senator Harry Reid of Nevada retires.

But Republicans say Mr. Schumer’s ballooning place in the conservative imagination is about more than his anticipated promotion.

He is increasingly seen as an avatar of Democratic craftiness and frustrated conservative aspirations: a wily tactician who has routinely defanged his Republican adversaries with ease, first as chairman of the Democratic Senatorial Campaign Committee and more recently as a lead negotiator on the issue of immigration reform.

Mr. Schumer is a potent symbol, said Kellyanne Conway, a Republican pollster, not because he is loathed, like Representative Nancy Pelosi of California, the House minority leader, or Mr. Reid, but because he is feared.

“Chuck Schumer has more political skills, shrewdness and instinct in his pinkie than Clinton seems to display out on the presidential campaign trail,” Ms. Conway said.

… It is in the context of Mr. Schumer’s involvement with immigration reform that he has most frequently appeared in the firefights of the 2016 presidential election. Opponents of Senator Marco Rubio, the Florida Republican, have sought to punish him for backing a compromise immigration bill that the Senate approved in 2013; they have tied him explicitly to Mr. Schumer, who, along with Mr. Rubio, was among the eight senators who forged the deal.

In 2015, Republican Senator Ted Cruz of Texas bragged of having opposed “Chuck Schumer’s Gang of Eight amnesty legislation.” Mr. Cruz and Senator Rand Paul, Republican of Kentucky, have criticized the Rubio-Schumer bill, and influential conservative radio hosts like Rush Limbaugh and Laura Ingraham have homed in on Mr. Schumer’s role in designing the legislation. …

Ms. Ingraham, the radio host, said Mr. Schumer’s prominence this time stemmed from both his designation as the Democratic leader-to-be and from the perception that he “completely snookered Marco Rubio” on immigration.

“It is very, very risky for the Republicans to nominate a presidential candidate who has already proven himself to be in over his head when it comes to dealing with the future Democratic leader in the Senate,” Ms. Ingraham said in an email. “And yet that is precisely what much of the G.O.P. establishment is proposing. And that helps to explain why conservatives are thinking a great deal about Chuck Schumer these days.”

Senator Schumer likes to claim he got a perfect 1600 on the SAT test while he was working after school for Stanley H. Kaplan, the future test prep tycoon.