Construction Industry Needs More Workers—They Can Hire Americans, Or Do Without

The recent hurricanes have left a trail of destruction in Texas and Florida, and residents are looking forward to rebuilding. But as a recent CBS report noted, there is a shortage of construction workers. Our school system has been pushing all young people to go to college when not everyone is a book nerd, and hands-on work skills like carpentry and plumbing are still needed. In addition, the skilled construction jobs can pay quite well, rather than leaving students with a mountain of debt — $37,000 on average for college graduates.

Home-building skills are needed for reconstruction in Texas and Florida. 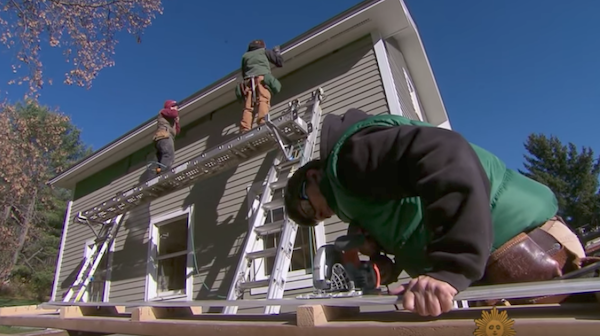 Now, it would be unwise to steer young folks into skills like masonry, which looks likely to be largely automated by robot bricklayers in the near future. Carpentry and plumbing skills will probably survive longer in construction, and remodeling will also supply a lot of jobs even in the automated future.

We certainly want Americans to do the rebuilding, not have thousands of immigrants move in, often illegally, as they did in New Orleans after Katrina to do the work and never leave.

Perhaps someone could organize some on-the-job apprenticeships in the rebuilding, if such a thing is possible.

The HELP WANTED signs are up, both figuratively and literally, in the wake of Hurricanes Harvey, Irma and Maria. There’s a lot of reconstruction to be done — and not enough trained workers to do it. Our Cover Story is reported by Mark Strassmann:

It’s been a month since Hurricane Harvey devastated the city of Houston and Southeast Texas. Damage estimates go up to $190 billion. The cleanup has begun, but a major shortage is looming for the rebuilding effort. It’s not a lack of will, or money; it’s a lack of skilled labor … a national shortage that’s reaching a crisis stage.

America’s economy has a growing labor crisis — a shortage of skilled construction workers. These men and women — carpenters, plumbers, electricians and masons — put a roof over your head. They’re getting harder and harder to find, at a time when — with two devastating mainland storms in the past month — they’ve never been more needed.

“Over the last four years, we’ve seen rising rates of open jobs,” said Robert Dietz, chief economist for the National Association of Homebuilders. “In other words, there’s a help wanted sign put out by the builder or the remodeler, and they simply can’t fill it.”

We talked to Dietz about these “Made in America” jobs, a traditional front door to the American dream.

“Over the decades as we’ve gone through different rounds of infrastructure development, building the nation’s suburbs, the highways and the rest, those construction jobs have been a critical part of building a middle class,” he said. “The challenge right now is that we simply do not have enough people who are ready and willing and able to join the construction industry.”