HAARETZ: "The Swiss Alps Seem Quaint Until You Learn the Truth About Their Residents"

From Haaretz, the Israeli liberal broadsheet:

Opinion: The Swiss Alps Seem Quaint Until You Learn the Truth About Their Residents

It turns out that the more pastoral a place looks, the more it’s swarming with racists and nationalists 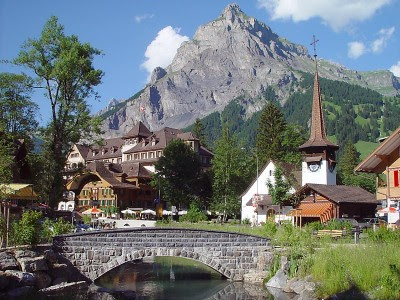 At least that’s what I’d have thought, if I hadn’t read in the local paper that in Kandersteg, the region I have been staying in, 48 percent of the votes in the last federal elections went to the right-wing, nationalist Swiss People’s Party. … What a pity that newspapers exist. If I hadn’t read them, I’d probably have thought that the residents of Kandersteg are pleasant, humanitarian types. All those rosy-cheeked village girls serving rosti, all those solidly built goat milkers. But it turns out that the more pastoral a place looks, the more it’s swarming with racists and nationalists. The more like a postcard it appears, the more politically benighted it is. The purer the sausage, the more authoritarian the personality structure. Best not to think about what the little goose girl would have been doing had she lived 75 years ago.

Helping her brothers defend Switzerland from the threat of Nazi invasion?

Okay, granted the Swiss were anti-Nazi in WWII, but the point is that they were distantly related by blood to Nazis, so that means that they are racially evil: corruption of blood. 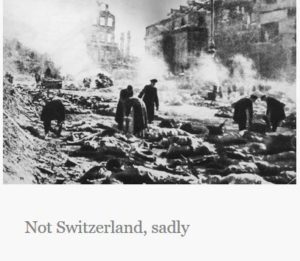 In contrast to Germany and Austria, Switzerland was not destroyed by bombing in World War II. Whereas the other German-speaking countries rebuilt themselves after the war, based on universalist ideas, Switzerland wallows in a mystique of continuity. …

Swiss xenophobia is one of the phenomena that pull the rug out from under the learned explanations for the rise of the far right in Europe. It’s said that the right has drawn strength from the economic crisis of the past decade, but Switzerland is as rich and sated as ever. It’s said that the right wing is on the rise because of the influx of Muslim refugees, but there are no foreigners at all in Kandersteg and similar districts. Muslims account for less than 1 percent of the population in the town. It’s a safe bet that many far-right voters have never encountered a Muslim – Sunni, Shi’ite or other – anywhere other than their television screen.

For the rural Swiss to learn from the harsh experiences of others is just plain wrong.

… From this point of view, Switzerland exemplifies one of the great paradoxes of tourism. We go to a different country in order to acquaint ourselves with a different reality. We long for someplace authentic, where uniformity hasn’t infringed, a place that has successfully resisted globalization and is preserving its difference and distinctiveness. But preserving a heritage comes with a price. Politically, opposition to globalization often assumes an ugly form: xenophobia and electoral support for nationalist parties. Right-wing parties fawn over ostensibly delightful traditions such as local beer and a rural way of life. … The desire to “preserve cultural heritage” dovetails clearly with enmity toward Muslims.

“Europe is changing,” “Europe isn’t what it used to be,” tourists cluck when they return home from a visit to the Continent. But maybe the problem with Europe is different in character: that it’s not changing enough. All the movements to preserve the baguette, to eradicate smartphones and to lead a “slow life” are generally another name for xenophobic and antipathetic politics. The Europeans view themselves as animals of the wild in need of conservation, for protection in the face of globalization. But very often it’s hard to say who’s becoming extinct and who’s causing the extinction.

Extinction as the ultimate cure for European xenophobia and conservatism: you might almost call it a Final Solution.

Note that Haaretz, while it would seem like a quality newspaper, appears headed toward long-term extinction itself, since few in Israel read it anymore. The kind of people in Israel who have lots of children prefer other newspapers. After all, the Israelis are descended from the pastoralist Abraham. And over a few generations that becomes determinative for the fate of a newspaper.

more profound truth: racialism comes from pastoralism….from discovery of laws & secrets of breeding, from the creation of thoroughbreds…