Independence Day: A Diverse Journalist Claims To Love America—But That Doesn’t Include The Founding Fathers, Or You 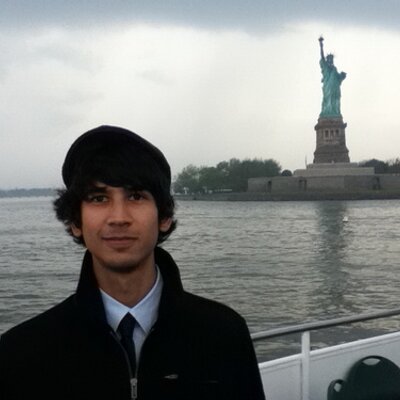 The Washington Post just featured a “patriotic” meditation on Lee Greenwood’s song God Bless The USA, and the United States itself by a young journalist named Arvin Temkar [Tweet him] either an immigrant himself or of immigrant stock, whose Twitter avatar is a picture of himself by the cliched Statue Of Liberty: My fellow liberals hate Lee Greenwood’s ‘God Bless the USA.’ I love it. | On Independence Day, there’s always room for a syrupy salute, June 30, 2017. It’s a horrific example of what pass for patriotism among immigrants, young people and the modern Left.

Temkar hates “your father’s America”—and this he is probably the most patriotic example of what “assimilated” Third World immigrants are becoming these days.

I have an Independence Day tradition: I like to listen to songs about America. My favorites tend to be critical of this country in some way, such as Woody Guthrie’s “This Land Is Your Land” or Bruce Springsteen’s “Born in the USA.” These aren’t the flag-waving anthems their titles suggest; they’re searing indictments of a nation that failed its citizens by leaving them poor, stuck and feeling — as Springsteen sings — “like a dog that’s been beat too much.” On our day of national pride, when celebratory words such as “freedom” and “liberty” are hurled about like Roman candles, it feels important to remain clear-eyed about our faults. But at some point in the day, perhaps after taking in a greed-bashing punk tune or Nina Simone’s burning civil rights lament “Mississippi Goddam,” I have a secret favorite: Lee Greenwood’s “God Bless the USA.” It’s a song my fellow liberals love to hate. I love it. Yes, it is overwrought and jingoistic. It glorifies war. It trumpets self-righteousness. There’s a reason Greenwood was invited to perform the song at the inaugurations of the last four Republican presidents, including Donald “America First” Trump. … [Links in original throughout]

Temkar is not really being fair to Lee Greenwood’s song—blogger Ann Althouse analyzes the Greenwood song here, asking “Overwrought, jingoistic, self-righteousness, war-glorifying… really? Why does it make some people feel that’s what it says when that’s absolutely not in the words? Where does that extra-textualism come from?”

My impression is that the youth of today is always hearing things like “jingoist”, “war-glorifying” (they call them “dog whistles”) whether they’re there or not. But where it really comes from is caste prejudice—not the kind of caste the Temkar family has back in India, but the kind of caste, or “bubble” that separates the Washington Post’s writers and readers from anyone who drives a pickup truck, serves in the Armed Forces, or votes for Trump.

After discussing how Ray Charles bowdlerized his version of “America The Beautiful” to make it less patriotic and less “white”, Temkar gets back to the Lee Greenwood song, and reveals who his heroes are:

It’s clearly a tribute to the armed forces, and I don’t deny the honor in that. But when I listen this Independence Day, I’ll also be thinking of the men and women who defended this country and its values in other ways: people like Edward R. Murrow, the broadcaster who risked his career to confront the demagogic Sen. Joe McCarthy; Harvey Milk, who helped pass gay rights legislation in San Francisco before he was assassinated; and Rosa Parks, whose courageous defiance was a spark for the civil rights movement, in which many were killed. I think, too, of James Baldwin, who wrote in “Notes of a Native Son” that “I love America more than any other country in this world, and, exactly for this reason, I insist on the right to criticize her perpetually.” For that, as the man says, I’ll gladly stand up.

I suppose so, but those heroes aren’t mine, or most Americans. And heroes look different seen from my angle.

Senator Joe McCarthy’s heroic anti-Communist campaign risked his career—Murrow was as safe as any anti-Trump journalist, and McCarthy was a victim of the same kind of concerted attack Trump is facing now.

Harvey Milk, as pointed out by Steve Sailer,  led a campaign for the total homosexual freedom that “ transformed Castro Street into the plague spot of the Western world, with AIDS killing its 10,000th San Franciscan in 1993”. [The Martyr of Castro Street, March 9, 2009]

As for Rosa Parks “whose courageous defiance was a spark for the civil rights movement, in which many were killed“  we old-fashioned conservatives  can’t help but point out that she was a picked professional agitator, and that if “many” were killed (the SPLC has a list of 45 people they consider martyrs to the Civil Rights Movement) it’s nothing to the many, many, many, many people who were murdered in the increase in crime caused by the Civil Rights Movement. (In New York in the early 90s there were about 2500 murders a year and there is still ongoing carnage in Chicago and what’s left of Detroit.

But even if Temkar was right about all these people being good guys—where are the normal heroes of normal Americans like George Washington, Thomas Jefferson, Christopher Columbus, Andrew Jackson, and even (if you absolutely insist) Abraham Lincoln?

Well, they’re all dead white villains. And the people who revere them are supposed to be replaced by people like Temkar himself. I remind you, he’s better and more patriotic than most of the DREAMers, et cetera.

However, here at VDARE.com we’re less skeptical about the old America than guys like Temkar are.

“celebrated by succeeding generations as the great anniversary festival. It ought to be solemnized with pomp and parade, with shows, games, sports, guns, bells, bonfires and illuminations from one end of this Continent to the other from this time forward forever more.”

He said that on July 3, 1776, in anticipation of the Declaration of Independence being declared, and he was right—so far.