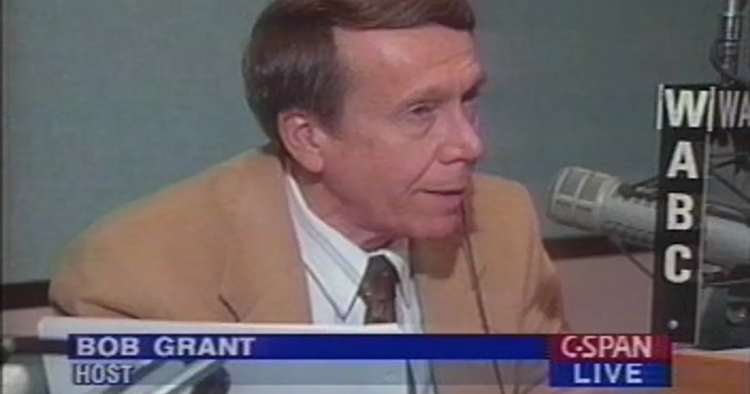 In Memoriam: Bob Grant—Father of Conservative Talk Radio, Although It’s A Wayward Child

Leftists rejoiced with characteristic crudity at the passing of Bob Grant, the conservative Talk Radio pioneer who died December 31 at age 84. Daryle Lamont Jenkins of the One Person’s Project, er, “One People’s Project,” shrieked in triumph that Bob Grant should “Rot in Hell!”This is the same Jenkins who recently ordered to pay $50,000 to Comanche patriot David Yeagley for his role in forcing the cancellation of the 2010 American Renaissance Conference at which Yeagley was to speak. (Read Yeagley’s 2012 AmRen speech here. )

Bob Grant was an exemplar of the confrontational conservative radio hosts that the Main Stream Media loves to describe as “shock jocks.”Beginning in the 1970s, Grant steadily built a following in New York City as a token conservative who eventually emerged as a dominant force on Talk Radio during the Reagan years. [Bob Grant, a Combative Personality on New York Talk Radio, Dies at 84, by Paul Vitello, New York Times, January 2, 2014]

As most obituaries noted, Grant was notorious for controversial remarks. He referred to the now-sainted Martin Luther King Jr.  as “this bum, this womanizer, this liar, this fake, this phony. ”He expressed great pessimism about the future of the country, because “the quality of the citizenry seems to be heading down. ”Finally, and most damningly, Grant noticed the great double standard you are not supposed to mention, saying, “You can talk all you want about ‘minorities’ rights,’ but heaven forbid you talk about white rights.”

Grant’s fall in 1996 came about because of an ill-considered crack at the news that then-Commerce Secretary Ron Brown’s plane had crashed. Grant joked that because he was a pessimist, he thought Brown would be the only survivor. Unfortunately, Brown actually had died.

With help from Jesse Jackson and Al Sharpton, the Leftist vigilante group Fairness & Accuracy in Reporting (FAIR) managed to get Grant fired from WABC. Though he would continue on other stations and blog and speak until his death, the damage was done. By 2008, in an example of the curious intensification of Political Correctness after what VDARE.com describes as the post-Soviet “Interglacial,”Grant was deemed too controversial to be given an industry Lifetime Achievement Award because of comments he had made years earlier. [Magazine Cancels Award For Shock-Talk Pioneer, By Paul Farhi, Washington Post, January 19, 2008]

Even after his  death, FAIR is still shrieking about Grant’s “racism. ”[How Racist Do You Have to Be Before the New York Times Calls You a Racist, by Peter Hart, FAIR, January 3, 2014]

Needless to say, this hypersensitivity about conservative Talk Radio is utterly hypocritical on the part of the Left and the “Respectable Right,” considering who else is on the air. For example, Al Sharpton, who is at least arguably responsible for deaths in the Crown Heights Riots and who famously summarized Western civilization as the theft of philosophy and mathematics by “Socrates and them Greek homos,” is still proudly aired by MSNBC. The back of Sharpton’s new book The Rejected Stone: Al Sharpton and the Path to American Leadership features praise from both President Barack Obama and…President George W. Bush.

Zingers aside, the Left’s view of Grant was always a caricature, and in his later career he was considerably more moderate. He even noted in 2011 that “on some social issues, like abortion or gay marriage, I was more what you’d call libertarian. It would make some of my listeners furious. ” [Bob Grant, conservative Talk Radio legend, dies in Hillsborough at 84, by Sergio Bichao, Daily Record, January 2, 2014]

Grant was pro-choice and praised RINO Jon Huntsman on the air and in writing during the 2012 Republican Presidential primaries. Eventually Grant went on to support Mitt Romney as the (don’t laugh!) “most electable candidate. ”

Grant was also an enthusiastic supporter of Israel, writing columns such as “God Bless the Jews!” And he was a True Believer in the Republican Party. Like Dennis Prager, Grant identified America itself with the GOP, writing that America died upon Obama’s re-election and making the usual tired comparisons between Barack Obama and the Nazis.

Nevertheless, Bob Grant, christened Robert Ciro Gigante, like Tom Tancredo, Joe Arpaio, and Lou Barletta, was an example of Italian-Americans who completely assimilated to the historic American nation. More than that, Grant himself really did represent his listeners—saying what they thought but couldn’t say, communicating their views, and standing for their interests. For this reason, he was, and is, hated.

In contrast, the contemporary MSM, from the Huffington Post to the Washington Post, sees its role as defending the political elite from the dangerous extremism lurking in Middle America. While the MSM can’t be bothered to investigate the President of the United States, a foreign policy disaster that leads to the death of an ambassador, or the political connections of the powerful, it is in constant hysteria trivia a politically incorrect tweet, a reality show star’s comments about homosexuals, or the unacceptable political beliefs of by Chick-Fil-A executives.

At its peak, Talk Radio allowed certain personalities to circumvent this kind of policing. As the introduction to Grant’s program put it, his show was dedicated to the idea that “as American citizens you have the right to hear, and to be heard. ” [Bob Grant, Father of Conservative Talk Radio, Dead at 84, by Bill Hoffman, Newsmax, January 3, 2014]

And Conservatism Inc. has been ultimately dependent on mobilizing (and then betraying) implicit white racial identity. Thus politicians like George Pataki and Rudolph Giuliani credited Grant with ensuring their political victories in New York. However, this may be a thing of the past. Grant hosted a number of those deemed “controversial” over the years, including David Duke. Bob Grant also praised Jared Taylor (audio clip helpfully provided by the One People’s Project. )

Even as late as 2012, Grant said to those of “European stock” that “I want to awaken in you the spirit of all the nationalities, a sense of pride.” [Celebs, media stump for Obama, BobGrantOnline, November 1, 2012]. But Grant’s heirs on the air are now more likely to hammer away at the kind of safe Conservatism Inc. economism that even he was susceptible to. It’s perhaps symbolic that Grant’s direct successor at WABC was Sean Hannity, whose principles are simply the Republican talking points of the day and who famously flipped on Amnesty (and then possibly back) after the 2012 election.

Part of this is due to the increasing concentration of Talk Radio ownership in cowardly corporate hands. WABC, formerly Grant’s flagship station, is now owned by Cumulus Media. Cumulus is even backing away from Talk Radio titans such as Rush Limbaugh out of fear, as advertisers continue to face pressure because of Limbaugh’s comment that Sandra Fluke was a “slut” because she demanded government pay for her birth control. [Talk Radio on WABC Shifts Focus to the Local, by Ben Sisario, New York Times, January 2, 2014]

The result: a chilling effect on Talk Radio hosts when it comes to issues that really matter. Limbaugh has been noticeably careful about immigration – although when he has spoken up, the impact is immense—and the less said about Sean Hannity the better.

Talk Radio is losing the “forbidden fruit” quality it enjoyed in the early days, and the result is something more predictable, partisan, and boring.

Americans who want to hear things “they can’t hear anywhere else” now have the Internet. But it doesn’t have (yet) the kind of mass access enjoyed by someone like Grant at his peak. Grant is now receiving the same kind of sneering treatment reserved for people like Sam Francis. Butut that’s not really what his career was about. It’s telling that Grant’s estate is calling for donations to Young America’s Foundation, a Beltway group that is using its vast budget to get college students to celebrate…Ronald Reagan’s birthday. It’s a metaphor for the entire movement: populist passion is channeled into the dead ends of economic wonkery or infantile partisan sloganeering.

Grant bears at least partial moral responsibility for this. He may have been the father of conservative Talk Radio, but his child today essentially an adjunct of the Beltway Right.

The lesson: Talk Radio—and the conservative movement—needs to speak openly for the audience that supports them.

Now that Bob Grant has passed, we should remember that he did that—if only in his best moments.