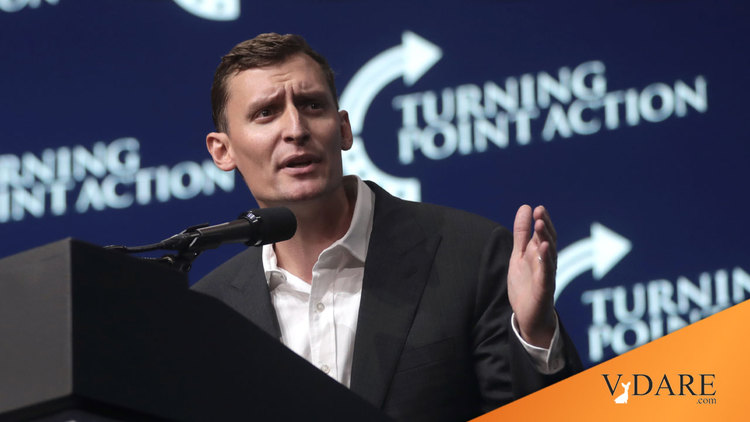 NYT: Blake Masters Pushes Hateful Conspiracy Theory—Democrats Like To Win, And Are Willing To Import Ringers To Vote For Them

Blake Masters, a top candidate in Arizona’s Republican primary for the Senate, has accused Democrats of plotting to “import” new voters. That poses a challenge in a state where a third of the voters are Hispanic.

Blake Masters, a venture capitalist running for Senate in Arizona, is among the many Republicans who argue that the left’s obsession with racial identity politics is driving Latino voters away from the Democratic Party.

But as he vies for the Republican nomination, Mr. Masters has pushed a different sort of racial politics that could repel Latinos in the state.

For months, Mr. Masters has promoted a specious theory portraying illegal immigration across the southern border as part of an elaborate Democratic power grab.

In speeches, social media videos and podcast interviews, he has asserted that Democrats are trying to encourage immigration so their party can dilute the political power of native-born voters.

When everybody knows that Democrats are instead trying to encourage immigration because it’s who we are according to Founding Father Emma Lazarus’s Zeroth Amendment to the Constitution. Or something. The details don’t really matter. What matters is the essence of the situation: the Republicans are the Bad Guys so anything that helps the Democrats win is Good. Not that Democrats encouraging immigration helps them win. That’s just a conspiracy theory.

Look, let me try to break it down nice and simple… Who do you hate? White male Republicans, right? Why do you hate them? Because they are hateful, of course. Therefore, you hate them.

“What the left really wants to do is change the demographics of this country,” Mr. Masters said in a video posted to Twitter last fall. “They do. They want to do that so they can consolidate power and so they can never lose another election.” In May, he told an interviewer that Democrats were “trying to manufacture and import” a new electorate.

What Mr. Masters calls an “obvious truth” is what experts in extremism

describe as a sanitized version of the “great replacement,” a once-fringe, racist conspiracy theory that claims that Western elites, sometimes manipulated by Jews, want to replace white Americans with immigrants to weaken the influence of white culture. The idea has been linked to the massacre at a Buffalo supermarket in May, the El Paso Walmart shooting in 2019 and the killings at a Pittsburgh synagogue in 2018.

Mr. Masters’s version — one that makes no references to Jews or white people, but instead sets up a conflict between immigrants and the native-born — has become pervasive in Republicans’ immigration rhetoric. It has risen to prominence alongside the debunked claims that immigrants living in the United States illegally are voting in elections in large numbers.

“This is a view in which there are institutional bad actors maliciously causing change, which will then lead to political subordination of whites,” said Robert A. Pape, the director of the Chicago Project on Security and Threats at the University of Chicago. “That is the root of the fear, and that’s the root of what the fearmongers are provoking.”

Mr. Masters, who declined to be interviewed, disputes that he has promoted the great replacement theory.

“It is obvious to everyone that Democrats see illegal immigrants as future voters,” he said in a statement. “No ‘theory’ is needed to observe that.” He criticized “fake experts” who claimed otherwise.

Mr. Masters is widely expected to win in the Arizona primary on Tuesday.

Seriously, the crazy thing is that it took until 2022 for GOP candidates to start pointing out how Democrats try to import ringers to rig American elections down the road.