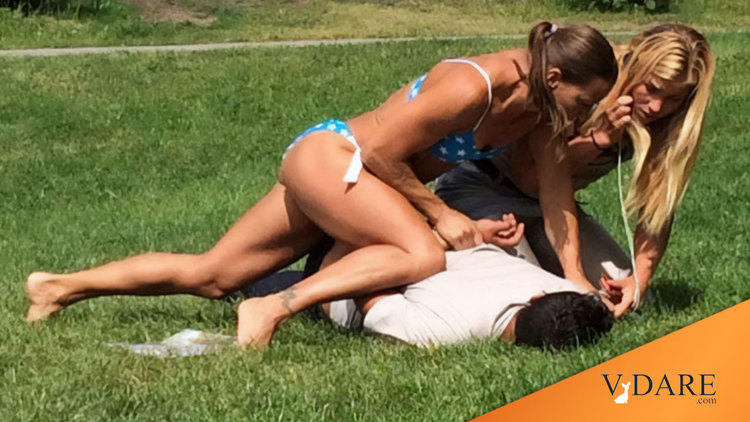 What Kind Of "Man" Did Swedish Bikini Cop Arrest For Stealing From Sunbathers? Probably A Gypsy

Mikaela Kaellner, the extremely fit-looking Swedish woman (above) kneeling on a man she caught stealing a mobile phone, is an off-duty Swedish police officer who arrested the thief while dressed like that.

A pickpocket made the unwise decision to try to steal from a group of off-duty police officers, and the result was brilliantly captured in a viral Instagram picture shared by the Swedish police officer Mikaela Kellner, who tackled the rogue in her bikini.

Kellner was sunbathing with friends at a Rålambshov park in Stokholm when a man came up to the group pretending to sell magazines. She suspected something was awry as he lingered around them. “I told my friends to keep an eye on their things. But as soon as he left one of my friends said ‘where did my mobile phone go?'” Kellner told The Local. Badass Swedish Cop Takes Down Pickpocket While Sunbathing

Here at VDARE.com, whenever we hear "Man Arrested" we ask "What KIND of man?"

Here's the story from Sweden's English language The Local:

"Mikaela Kellner and her friends were sunbathing in the Rålambshov park in Stockholm when a man walked up to them pretending to sell magazines for homeless people. [A detail omitted by Time. Wouldn't want to pander to anti-homeless prejudice]. When he refused to take no for an answer, but instead lingered around their blankets, she started suspecting that something was wrong.

"I told my friends to keep an eye on their things. But as soon as he left one of my friends said 'where did my mobile phone go?'" Kellner told The Local on Thursday.

She explained that the man had used his magazines to cover the mobile phone, picking it up without anyone noticing when he left. Let's just say this was a decision he would soon come to regret. ...

"I've had a lot of positive comments both from friends and colleagues. It happens all the time that valuables are taken like this and often you don't notice they're gone until later. I mainly just wanted to raise awareness of how cunning these people are, almost like magicians."

My emphasis. Who are these people who steal, almost like magicians, under cover of begging? Well, here's a message board thread discussing this in Swedish under the heading of  Forums Politics Integration and Immigration Foreign nationals Begging (Wire reports) No. 2 [This is the Google Translate version]. Their conclusion—probably a Romanian gypsy.

A while back, I wrote that Joe Sobran, discussing prejudice, said that

“But most prejudices aren’t created by official doctrines; they result from popular experience and the slow spreading of a group’s reputation. The first gypsy I ever met — on a street in Rome — grabbed a wad of money out of my hand. I’d been too naive to be wary of her, though my companions had warned me against her.”