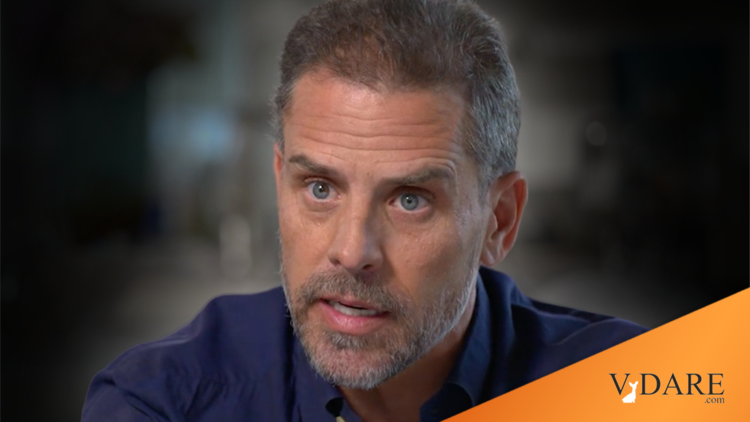 Earlier by Michelle Malkin: Beltway Bidenspawn-Ship Has Its Privileges

If the Main Stream Media have anything to do with it, it seems we will—to adapt Richard Nixon’s famous sign-off after losing the 1962 California gubernatorial race—have Hunter Biden to kick around for a while yet. Not that that the MSM has ever been particularly anxious to discuss Hunter Biden. But if Joe Biden actually becomes President, it will be even harder to avoid the fact that he has a son who is not merely embarrassing but who may be mildly brain-damaged.

Joe Biden’s life story involves overcoming adversity—indeed tragedy—in a way that is simply not true of Donald Trump, but which is true of many voters. Biden was raised in a relatively poor family, and he had to overcome a terrible childhood stutter. Most poignantly of all, in December 1972, shortly after making it to the Senate aged just 29, Biden’s entire family was in a car crash, resulting in his wife and baby daughter being killed, and his two young sons being seriously injured and spending time in hospital. Biden was actually sworn into the U.S. Senate from his son’s hospital bed in Wilmington, Delaware [Trauma and triumph: the 10 moments that made Joe Biden, by Luke Harding, The Guardian, November 8, 2020].

We all know about the Hunter Biden scandal, which the MSM and Twitter did so much to suppress: the discarded laptop, the drug-use, the evidence of corruptly offering a Ukrainian company access to his then Vice-President father, and Joe Biden’s possible collusion in this [Social media giants are accused of 'politically motivated censorship' after they blocked stories alleging corruption involving Donald Trump's Democratic rival Joe Biden, by Caroline Graham, Mail Online, October 18, 2020].

But what hasn’t been discussed is the way in which that horrific accident almost 50 years ago is likely to be relevant to this scandal.

If you are in a serious car crash, such that you end up unconscious, you will sustain brain damage and if the trauma to the brain is serious enough then this will be permanent [What Happens Immediately After the Injury?, Icahn School of Medicine at Mount Sinai, Brain Line, July 25, 2008]. Beau Biden suffered a broken leg on that terrible day in 1972 but his brother Hunter Biden sustained a fractured skull, meaning that we can be certain that he—though not his brother—sustained brain damage [Joe Biden family life: his first wife, children, personal tragedies, by AS English, AS, November 8, 2020].

Most commonly, this brain injury will manifest in terms of changes in personality. Victims become less able to control their emotions. They are more irritable, more impulsive, more prone to taking risks, and more prone to mood disorders such as depression [Depression, Irritability, Personality Change After A Car Accident? You May Have A Brain Injury, by Kim Cullen, Cullen & Hemphill, 2020].

People who have poor impulse control are prone to drug and alcohol addiction, because they can’t stop themselves from abusing substances far too much, meaning they become addicted and cannot break the addiction. Those who suffer from depression are more likely to become addicts, through alcohol and drug abuse as a means of alleviating the depressive symptoms.

This creates a vicious cycle, according to researchers, because people who have alcohol in their system are then more prone to impulsive behavior and to taking risks [Substance Use and Mild Traumatic Brain Injury Risk Reduction and Prevention: A Novel Model for Treatment, by Jennifer Olson-Madden et al., Rehabilitation and Research Practice, 2012]. According to psychologists, these traits are associated with marital breakdown [Personality, by Daniel Nettle, 2007] and even with sexual impulsivity.

One of the results of damage to the frontal lobe can be a very high libido, technically known as “hyper-sexuality” [Brain Trauma Can Cause Compulsive Sexual Desires, by Amy Broadway, Psychology Today, March 14, 2015].

When you consider that Hunter Biden’s father does not appear to have the same kinds of problems , nor did his brother, allowing us cautiously to rule out genetic factors, Hunter Biden seems like a textbook case of car-crash induced brain damage: the drug and alcohol addiction, the risky and questionable business dealings, his own marital breakdown, questionable sexual behavior consistent with hyper-sexuality (such as having an affair with his brother’s widow), and the fathering of an illegitimate child in Arkansas and then trying to avoid paying for it, almost leading to contempt of court proceedings [Hunter Biden agrees to pay child support to Arkansas woman, avoids contempt of court hearing, by Kevin Breuninger & Dan Mangan, CNBC, January 27, 2020].

Furthermore, leaving his laptop, brimming with potentially incriminating information, in a store and failing to collect it [Here's what happened when NBC News tried to report on the alleged Hunter Biden emails, by Ken Dilanian & Tom Winter, NBC News, October 30, 2020] is consistent with the behavior patterns expected of somebody with mild but permanent brain damage: impulsivity, failure to think about the future and about the consequences of your actions.

That tragic December day 48 years ago has defined Joe Biden’s life in so many ways. If Biden does become president it is likely, in part, due to a sympathy vote. And a key element of this is a son with a permanent brain damage due to a car crash in 1972.

The chances are—as I suggested in the somewhat similar case of Prince Harry’s marriage to the obviously unstable Meghan Markle—that this means trouble for a Biden White House down the road.