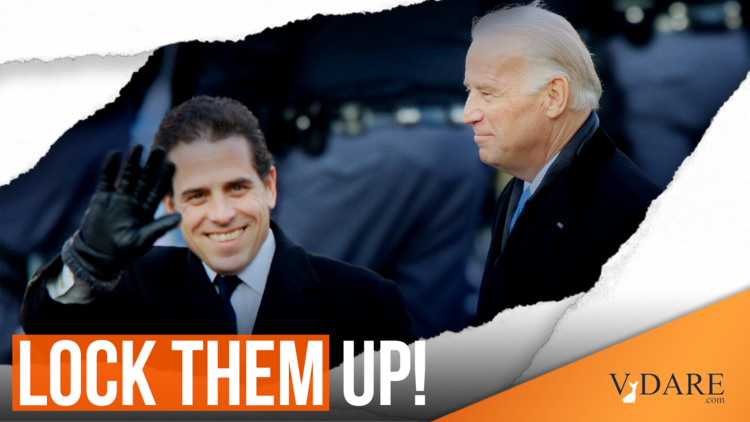 Earlier, by Patrick J. Buchanan: Will 'Ukraine-Gate' Imperil Biden's Bid? and by Ann Coulter: The Transcript We Really Want To See

If Joe Biden loses on Nov. 3, public interest in whether his son Hunter exploited the family name to rake in millions of dollars from foreign donors will likely fade away.

It will not matter, and no one will care.

But if Joe Biden wins the presidency, a prediction: by the Ides of March 2021, there will be an independent counsel or special prosecutor named to investigate the Biden family fortunes and how they were amassed.

Why is such an investigation a near certainty in a Biden era?

First, there is a 50-year tradition in America of an antagonistic media and political enemies pulling down presidents they oppose.

Watergate was the prototype—a political bugging of the sort that J. Edgar Hoover used to do as a courtesy for presidents.

Yet, the petty crime and White House cover-up was blown up by a hostile Congress, media and special prosecutor's office to bring down a president who had just won 49 states and 60% of the nation.

In 1984, Ronald Reagan won a 49-state landslide. But when he lost the Senate in 1986, Washington, D.C., sought to break his presidency and bring him down for sending aid to anti-Communist Contras in Nicaragua. Reagan narrowly escaped to go on and win the Cold War for the West.

An investigation by an independent counsel of President Bill Clinton's Arkansas land deal metastasized into a sex scandal about which the president perjured himself. This led to his impeachment by a Republican House.

Even before he became president, Donald Trump was the target of an FBI probe. That evolved into the Mueller investigation, which took years to conclude that Trump hadn't colluded with Vladimir Putin in the 2016 election.

Yet, serious damage was done to Trump's presidency. And despite the failure of the Mueller investigation to find a smoking gun, Nancy Pelosi's House impeached the president for a phone call in which he suggested to the president of Ukraine that he might cooperate in a U.S. investigation of what Joe and Hunter Biden were up to in his country.

So it is that America has become a country where if you lose the presidential election, the fallback position is to impeach the victor.

The Third Worldization of American politics is well-advanced.

Yet, the cliche remains true: where there's smoke, there's fire.

And Hunter Biden's business and investment career is like a California wildfire where the smoke can be seen in Colorado.

Consider. While Vice President Joe Biden was President Obama's point man on cleaning up corruption in Ukraine, son Hunter, with zero experience in the oil and gas industry, was suddenly offered a seat on the board of Burisma Holdings, a corrupt gas company in Ukraine, at $83,000 a month.

In 2013, Hunter accompanied his father to Beijing.

During his stay, Hunter apparently peeled off to arrange for $1.5 billion in Chinese funds to be transferred to an investment fund in which he was an advisor. So claims Trump.

According to a Senate report, in 2014, the widow of the mayor of Moscow transferred $3.5 million to an investment company started by Hunter Biden. Hunter's lawyer denies it.

Comes now word that Hunter was in business with a Chinese company in 2017 and may have taken in $5 million, while stiffing his partner Tony Bobulinski.

Bobulinski, a former naval officer, claims that Hunter sought to leverage the Biden family name, and that he, Hunter and Joe Biden's brother Jim were involved in a project to raise cash from the Chinese. Moreover, the former vice president was a silent partner, the "big guy" in the operation whose name was never to be mentioned.

Bobulinski said he met with Joe Biden for an hour to discuss it.

I have never received a dollar in foreign money. I never used my office or influence to advance my son's business with foreign entities. I never spoke to my son about any of his dealings in Ukraine, Russia, China or anywhere else.

Major media are either denouncing the allegations as unproven or ignoring the story, the motive for which is apparent. Journalistic duty be damned. We have to get rid of Trump. And anything that jeopardizes that highest of goals should be buried until after Election Day.

However, if Joe Biden is elected, the incentive to cover for him and for Hunter vanishes. The old journalistic enthusiasm for the hunt to bring down another president will reappear, and more information will come spilling out.

And as the claims and counterclaims, and allegations and counterallegations collide, pressure will build for Biden's Department of Justice to bring in an independent counsel to investigate and separate what is true from what is false and what is unethical from what is criminal.

If Biden wins, son Hunter is going to have an exciting spring.