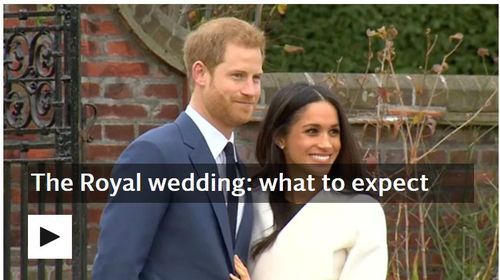 “She’s Trouble”—But So Is He! Evolutionary Psychology Says Meghan and Harry Will Divorce 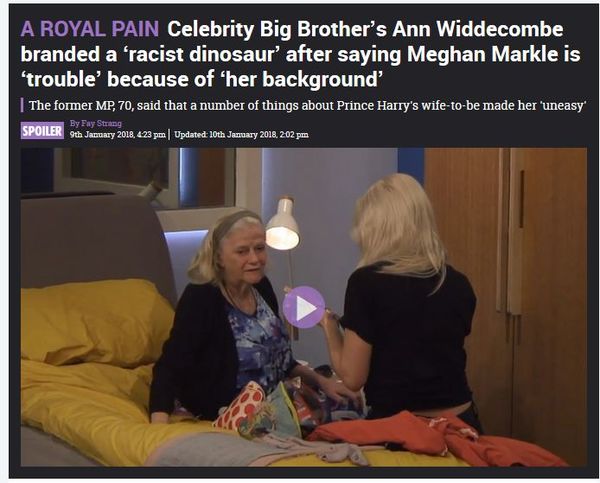 When British Conservative politician Ann Widdecombe dared to say what any rational person believes about the soon-to be-royal Ms. Meghan Markle (“I think she’s trouble”) she was branded a “racist dinosaur” . [A ROYAL PAIN Celebrity Big Brother’s Ann Widdecombe branded a ‘racist dinosaur’ after saying Meghan Markle is ‘trouble’ because of ‘her background’, By Fay Strang, The Sun, January10, 2018] In fact, the deeply religious Widdecombe, ensconced in the UK’s “Celebrity Big Brother House,” didn’t mention Markle’s ethnicity or the fact that this is a mixed-race marriage at all. But given the psychological and strongly genetic factors that predict divorce, this whole marriage is “trouble.” A “super-forecaster” acquaintance–whose meal ticket is his ability to make correct predictions—reckons about three years to separation, five or six years to divorce.

In the case of the marriage of Harry’s brother Prince William to Kate Middleton, only one of them is from a broken home. Prince Charles and two of his three siblings are divorced. Princess Diana’s parents divorced when she was 8, and her brother, the Earl Spencer, has two failed marriages behind him. Kate’s parents seem to have managed a loving and successful union and, perhaps, so will she. But divorce is about 40% genetic [Marriage and divorce: A genetic perspective. Beth Jerskey et al, Personality & Individual Differences, October 2010], so it becomes much more likely with Harry and the former Suits starlet.

Markle’s father has been divorced twice. Her mother has been divorced once. Her half-sister has contracted two failed marriages. And then there’s her half-brother, a divorced alcoholic, who has charged with holding a gun to his girlfriend’s head in 2017. [EXCLUSIVE: Shock for Harry's girl: Meghan Markle's BROTHER is arrested and charged with holding a gun to his girlfriend's head 'in violent row during late night drinking session at his flat', Daily Mail, January 14, 2018]

Markle herself was already divorced at 32, after just 23 months of marriage, sending her ring back to her ex-husband via registered mail. [Is THIS the real reason Meghan Markle divorced her first husband Trevor Engelson? By Belinda Robinson, The Sun, April 20, 2018] Her divorce and her ruthless treatment of her ex imply low altruism and low impulse control, both key predictors of marital breakdown [Personality traits and mental divorce. Fani & Kheirabadi, Proceedia, 2011, 30:671-5].

Markle’s father’s side have shown themselves to be money-grabbing and dishonest, with her father setting up supposed “paparazzi” photos of himself to make a quick buck out of his daughter’s success. [,by Owen Gough, Express, May 16, 2018 ] 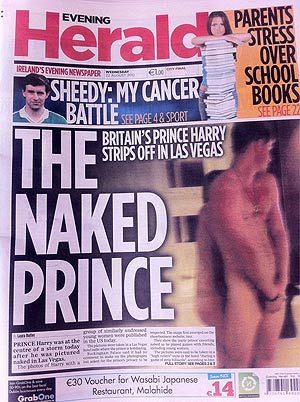 And Markle is also a very successful actress. The key predictors of success in the world of acting are altruism, extraversion, mental instability and being something of a fantasist who can escape into an imaginary world, a trait known as ‘Openness’ in psychology. [Psychological profiles of professional actors, by Daniel Nettle, Personality & Individual Differences, January 2006]

However, it’s already clear that Markle is low in altruism, so her success must be down to her extraversion (which predicts risk taking) and mental instability, which predicts a very rocky relationship. Naturally, these two traits also predict divorce—see Fani and Kheirabadi, above—which explains why Hollywood is so liberally peppered with multiple marriages.

Harry, of course, has shown himself to be an embarrassing risk-taker: the nude photos, the drug taking, the Nazi uniform worn to a costume party when he was 20 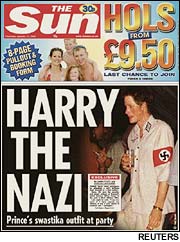 . People from broken homes are prone to risk taking (see Personality: What Makes You the Way You Are by Daniel Nettle, 2007). Their childhoods have been unstable in a key way.

Of course, the one issue Ann Widdecombe couldn’t mention: Markle is half-black. But she should have done.

A fast LHS is an adaptation to an unstable ecology in which you have “live fast and die young.” You grow up quickly, create only weak social bonds (people aren’t worth investing in, they could die any minute), and invest most of your energy is sex, in the hope that some offspring will survive. The single mom with kids by multiple dads selected because they’re muscular follows a fast LHS.

However, in a stable ecology, the carrying capacity will be reached so you end up competing with others from your own group. In this situation, you triumph by adapting a slow LHS, slowing down and investing more energy in nurture and less in sex. You create stronger bonds, because tightly cooperative groups are more likely to survive in a stable yet competitive environment.

LHS is strongly genetic and a stable, competitive environment selects for “quality” over “quantity.” In a stable, harsh ecology you could millions of offspring and they’d all die, due to being insufficiently adapted to the environment. But the one strongly-adapted child, heavily nurtured, may well survive and flourish.

Slow Life History Strategists are attracted to people who are genetically similar to them. This is because they are evolved to invest heavily in the nurture of their one partner and (consequently relatively few) offspring. They compensate for this by selecting sexual partners who are genetically similar to themselves, meaning they pass on more of their genes. People often marry those who, just by genetic chance, are equivalent of third or fourth cousins and in small societies they can literally marry such people [An association between the kinship and fertility of human couples, Helgason, A. et al. Science, February 8,2008).].

As Slow Life History Strategists are investing in their partner and offspring, they want to be sure their partner is committed so high altruism and impulse control become more important relative to evidence of good genes (e.g. beauty, facial symmetry). Also, such people are strongly adapted to their ecology so marrying someone very different will not only be a risk, and they hate risk, but will make the offspring less well-adapted.

Middling LH strategists tend to marry close relatives, meaning men can ensure that their “offspring” are at least related to them, and they strongly control females, through patriarchal systems such as the Muslim purdah, further alleviating their paternity anxiety. But life is too unstable, and people too untrusting, to simply marry for love. And such a system requires sufficient stability to know who your father (and thus your cousins) are.

People with a very fast LH are different again. With little interest in investment, they want to copulate with as many people as possible. So, if they are males, they want females who are symmetrical (meaning good genes and thus healthy and fertile) and young (and so fertile). Equivalent women, in their unstable lives, want men who are muscular and tall. But like slow LH strategists, though to a lesser extent, they will select for men who can invest something in them, because then their offspring are more likely to survive. So they are strongly attracted to the man’s wealth and status [The Evolution of Desire: Strategies of Human Mating., by David Buss, 1989].

Consistent with this, there is a growing body of evidence that mixed-race children have elevated levels of mental instability, in comparison to monoracial children [Is miscegenation bad for your kids? By Emil O. W. Kirkegaard, EmilKirkegaard.dk, April 1, 2017].

This makes total sense. In a stable yet competitive ecology, mental instability is, to a greater extent, selected out. Fast LH strategists are more likely to engage in interracial unions leading to fast LH (mixed race) children who, being the products of two fast LH parents, are more likely to be mentally unstable.

And, equally in line with this, mixed race and even interethnic marriages are more likely to end in divorce than mono-racial or mono-ethnic ones. They will also produce children, like Meghan Markle, who are relatively genetically dissimilar to either parent, meaning the parent is likely to bond with less and invest less in the child, promoting a sense of instability in her, so elevating the probability of her divorcing later on.

It seems clear that Meghan is not especially close to either parent and doesn’t see them very much. It follows that both Meghan Markle and Prince Harry–by virtue of contracting a mixed-race marriage at all–are fast LH strategists who are thus high in the personality traits which lead to divorce.

Meghan and Harry met in 2016, when she was in a stable, two-year relationship with another man, even living together in Toronto. But Meghan broke up with him and eventually bagged a prince who was utterly besotted with her, bombarding her with text messages until she agreed to go on a date. [The ex-files: Who did Meghan Markle date before Prince Harry?, NowToLove.com.au, May 16, 2018]

And then there’s the age gap. In that women select for status, they tend to marry older men. Men select for beauty and fertility, so they tend to marry younger women. Clearly, Markle is marrying the ultimate high-status man, so she can easily trade this for any attraction she might have to men who are older than her, such as her first husband was.

It is, however, unusual for a high-status male to marry a woman who is older than him, especially when he is already 33 and she is three years older still. One possible explanation: Prince Harry’s instinct to outbreed is so strong that he’s prepared to marry a slightly older woman if that is what will permit it. Also, being mixed race, Meghan displays rare genetic combinations and a low number of double doses of mutant genes, making her particularly physically healthy. This “hybrid vigor” could be sufficient to compensate for her age. 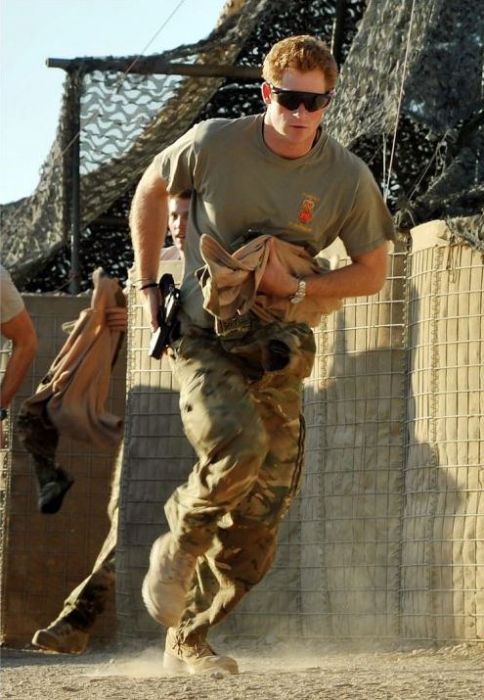 Prince Harry has never had to worry about money. But there is an extent to which his life hasn’t been easy: The spare, not the heir, losing his mom at a vulnerable age, combat in Afghanistan . . . even rumors about his true paternity. [WAR VETERAN Who is James Hewitt, did the ex-Army captain and Princess Diana have an affair and is he Prince Harry’s father?,  By Gemma Mullin, May 18, 2018]

This manifestly doomed marriage will make it even worse for him in the long run. She’ll tire of him.

But we can’t say so. The bride is half-black, so the “will to believe” will be too strong . . . right up until day the inevitable split engrosses the UK tabloids.