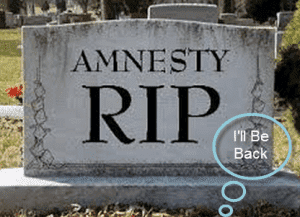 For experienced observers of the Immigration War (futile to call it a debate) the striking feature of these essays is the utter lack of originality. Adelson, who I suppose is a stereotype’s stereotype actually cites the Statue of Liberty and intones

…with the exception of Native Americans, we are all immigrants or descendents of immigrants. Let us determine a long-term path to citizenship that is unambiguous. For us to do anything less would be a repudiation of the very foundation that has made America the world’s greatest melting pot.

Apparently the Redskins sprang out of the ground.

Neither malefactor of great wealth gives any consideration to the impact of Amnesty and further excessive immigration on existing Americans, although Murdoch does mumble about further economic growth. Immigration is good for them: nothing else registers.

As I observed when Adelson first went public with his Amnesty enthusiasm in the Wall Street Journal advertorials of December 2012 the intention here is clear: to advertise to GOP Congresscritters THE MONEY IS HERE! There is no need to bother with arguments.

The ambition is for the whole Republican Party to be as corrupted as the South Carolina GOP and do a DeMint.

American and Americans do not matter.