Raul Labrador: A Fraud. But Our Fraud? 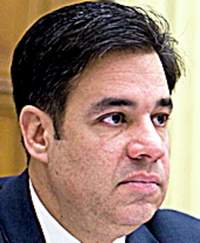 Towards the end of last week it became apparent that the coronation of Treason Lobby servant Kevin McCarthy as GOP House leader after the Cantor implosion was shocking even observers fairly tolerant of the Republican leadership. Eric Erickson (who deserves much credit for his early call on Cantor) posted a well informed essay The Stupid Party RedState June 12th 2014

Less than twenty-four hours after the shockwaves of Eric Cantor’s defeat, the House Republican Party has decided to ignore the results as a meaningless anomaly.

They will expedite a leadership election to affirm the status quo with Cantor’s right hand, Kevin McCarthy, picked as Majority Leader.

McCarthy is squishy on a host of issues, bad on immigration, and not a friend of conservatives. House Republicans looked on the biggest electoral surprise of the year and are giving it the middle finger…

Cantor was increasingly at odds with conservatives and far too cozy with business interests. His defeat presents House Republicans with an opportunity to signal — ahead of the 2014 midterm elections — that they're listening to conservatives. But by elevating McCarthy, who is next in line as whip, they'd be sending the opposite message — that they're determined to crush conservatives

Someone was listening! On Friday Raul Labrador (ID-1) declared he was opposing McCarthy.

Labrador’s candidacy is a bad joke. He is Puerto Rican-born, an immigration lawyer and a Mormon, all of which raise serious questions about the validity of his Patriotic credentials – and his NumbersUSA ranking is a miserable C+

Worse, as Brenda Walker noted in House Republicans Multitask To Betray Base Over Amnesty he was a member of the House version of the “Gang of 8” seeking to forge a “bipartisan” Amnesty bill. And, tellingly, he joined in the efforts to form a lynch mob over Steve King’s accurate puncturing of the Illegal Immigrant Valedictorian myth.

My opinion is Labrador is from the same stable as Marco Rubio – overpromoted, because of the Management’s anti white predilections, to the task of splitting any Patriotic reaction to Business as Usual by the House leadership.

Paranoid? Where was Jim De Mint this Primary season when his country needed him?

I suppose if I were a Congresscritter I would vote for Labrador just to make a statement. But you have to wonder. In 2011 I asked Immigration And Administrative Amnesty: What Specter Is Haunting The GOP? Subsequently an answer has emerged: massive amounts of money. But why is there not one Jeff Sessions in the House?