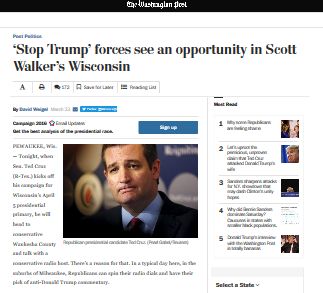 Wisconsin’s April 5 GOP primary has been described as the “Masada of the ‘Stop Trump’ movement”. [‘Stop Trump’ forces see an opportunity in Scott Walker’s Wisconsin, by David Weigel, Washington Post, March 2016], In a brawling CNN panel appearance Sunday morning, Trump aide Stephen Miller said “we think we’re going to do very well in Wisconsin by focusing on trade and immigration issues that appeal to the broadest swath of the electorate” [Stephen Miller Exposes Faux-Feminism of CNN Panel with Facts About Muslim Migration and Open Borders, by Julia Hahn, Breitbart, March 27, 2016]. Wisconsin’s population was about 4.6% immigrant in 2010, below the national average of 13.7%. But my experience as Executive Director of the Midwest Coalition to Reduce Immigration [MCRI] suggests this Trump strategy may pay off.

For example: last month’s massive "Día sin Latinos" [Day without Latinos] demonstration in the state capital of Madison received essentially no national publicity [A message to Wisconsin's immigrant-bashers, by Michael Billeaux and Liam Manjon, Socialist Worker, February 2, 2016], perhaps because the 2011 demonstrations against Governor Scott Walker’s pruning of government union power proved such an embarrassing failure…or because similar demonstrations backfired against Amnesty in 2006.

Organized by the Leftist, rabble-rousing Voces de la Frontera (whose mission statement illogically boasts of defending low-wage workers) the demonstration closed many businesses—mostly restaurants—and drew 20,000 illegal aliens and their advocates to the state capitol to protest against what they say are two “anti-immigrant” bills.

But the demonstrations—or something—had an effect. The Sanctuary City bill, which easily passed the GOP-controlled Assembly, was ignored by the politically correct GOP-controlled Senate until the current session ended on March 15. Senate Majority Leader Scott Fitzgerald said the legislation wasn’t a “top priority” for his gutless caucus and Governor Scott Walker “also indicated he was fine with the legislation not making it to his desk this session” [Nass blames ‘political correctness’ for blocking vote on sanctuary cities bill, by Andrew Beckett, Wisconsin Radio Network, March 14, 2016]. 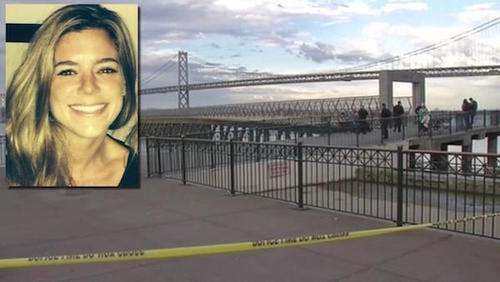 So much for Kate Steinle.

And SB 533, which passed the Senate, is still waiting for Scott Walker’s signature.

Will he sign it before his much-rumored endorsement of Ted Cruz? [Scott Walker: I'll Endorse for President This Week, by Cathy Burke, Newsmax, March 27, 2016].

Walker who, like Ted Cruz, had "evolved" in a patriotic immigration direction during his short-lived presidential campaign (although he ignominiously retreated on closing the Anchor Baby loophole, reportedly under pressure from Minnesota billionaire Stanley S. Hubbard—On birthright citizenship, Scott Walker takes yet another stance: Don’t change the Constitution, by Jenna Johnson, Washington Post, August 23, 2014) seems to have reverted to Chamber of Commerce type, like his Republican colleagues in the Legislature, knowing that the state’s $43-billion dairy industry is addicted to cheap immigrant workers, nearly half of them reportedly illegal.

Wisconsin columnist Chris Rickert (email him) recently regurgitated dairy lobby propaganda, claiming playing by the rules would send the price of dairy products through the roof:

There might be more people clamoring to “work on these rural farms”—and thus more incentive to crack down on undocumented workers—if the hourly pay were significantly higher than the mid-teens range (dairy industry executive John) Holevoet mentioned on the radio the other day.

Bringing wages up to what they should be when you work out in the middle of nowhere, more or less chained to the lactation schedules of hundreds of cows, would obviously come with a pretty hefty spike in the cost of dairy products.

The Texas A&M study found that “eliminating immigrant labor would reduce the U.S. dairy herd by 2.1 million cows, milk production by 48.4 billion pounds and the number of farms by 7,011.

“Retail milk prices,” it continued, “would increase by an estimated 90.4 percent.”

Those kind of changes might be enough to take the “dairy” out of America’s Dairyland.

And I’m not sure even the most virulently anti-illegal immigration Wisconsinites want to pay nearly twice as much for their beloved cheese.

But the cost of curds should be the least of Wisconsinites’ concerns. Like other parts of the country that find themselves dealing with increasing

Thanks to the Refugee Racket, almost one percent of Wisconsin’s population are now the notoriously dysfunctional Hmong, a Laotian hill tribe. In 2004 Chai Vang, a Hmong refugee shot and killed six hunters during a dispute over their private hunting area. (See Hmong Wrong For America. America Wrong For Hmong, by Joe Guzzardi, August 1, 2003).

Nor has it made much difference to Wisconsin’s politicians—yet. VDARE.com’s Talk Radio Listener recently reported a clueless performance on the refugee scandal by Wisconsin Senator Ron Johnson, who is up for re-election this year.

Johnson is typical of a Republican Party that has not kept its promises to fight the Obama Administration's agenda, especially the president's executive amnesties for millions of illegal aliens. About a year ago at a Townhall meeting I tried to get him to acknowledge the impact of foreigners on American workers. Like all politicians he agreed that illegal immigration should not be tolerated, but he wouldn't agree that reducing legal immigration was appropriate even during a period of very high unemployment. His response was simply that we are a "nation of immigrants."  His record on reducing refugee and asylum fraud is a mixed bag that leaves me skeptical as to just how serious he is about America’s security and well-being.

If I had the opportunity to question them, I’d ask the following:

Why is nobody in or out of Congress, including an MSM that can’t spell Critical Thinking let alone engage in it, demanding to know why, according to Pew Research, 7 million illegal aliens are being permitted to remain in their payroll jobs in construction, manufacturing, services and transportation while the Bureau of Labor Statistics says 15 million Americans are unable to find full-time work?

How can “Immigration Reform”—Amnesty—be “comprehensive” if millions of jobless citizens are deliberately excluded from the mix?

Dave Gorak, [Email him] a retired Chicago journalist, is the executive director of the Midwest Coalition to Reduce Immigration. He and his wife abandoned the ant hill called Chicago in 2005 for the quieter environs of rural southwestern Wisconsin.