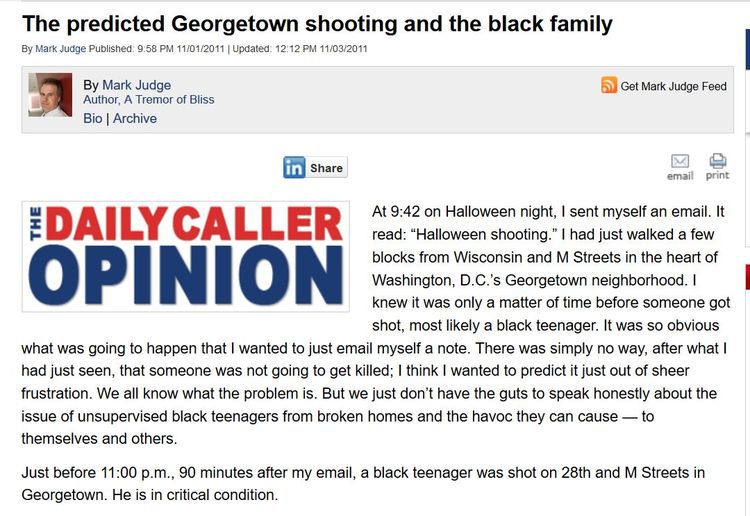 Halloween In Georgetown: Africa In Our Midst?

I was in Washington D.C. on business on Halloween. My colleagues and I—all dressed as Patrick Bateman from the 2000 cult-film American Psycho—decided to venture out into Georgetown, the biggest SWPL retreat from the black undertow that exists in the District of Corruption. [VDARE.com note: The fictional Bateman was a white guy with a suit and tie—obviously a dangerous character.]

Wanting to take in the scene, we had our cab driver drop us off near the entrance of the Key Bridge at the foot of M Street, in the very heart of Georgetown.

What we experienced was something that we had only previously watched on crime reports on the nightly news.

What looked like the combined populations of Anacostia and Prince George’s County were wandering aimlessly through the streets of Georgetown. A heavy police presence was on the scene trying to maintain order. It felt like martial law had been declared.

“We need to get our cameras out, in case of a Flash Mob,” said a friend. “Mahogany Mob,” I corrected him, pointing out that the lethal spread of mob and rob attacks across the country this past summer (well, since Obama was elected) have all had one key common denominator: they were all composed of black people—just as the crowds in Georgetown were on this evening.

Jesting aside, we quickly made our way into one of the local watering holes where my friends and I imbibed spirits, enjoyed the festivities, and caroused with DC’s finest double Xs.

Suddenly a girl began pointing in hysterics across the road. In literally the same spot where my friends and I had been joking about the Mahogany Mob earlier, a gun fight had broken out between two people in the mob. One received a bullet in the head. [Halloween violence in DC leaves 6 injured, including juvenile shot in Georgetown, The Washington Post, November 1, 2011]

In total, six people in D.C. were shot that night.

We were not alone though. Grisly incidents like this transpired all across America on Halloween night—invariably involving black people.

In Macon GA Trick-or-Treating is fading away because the safety of residents is in question. In Cleveland Heights OH, where Mahogany Mobs have terrorized the business district forcing a strict curfew, trick-or-treating was forced to end at 6 p.m.; Marion Salmon Hedges, while purchasing candy for underprivileged kids at a Target shopping complex in East Harlem, had a shopping cart dropped on her head from four stories above. Two black 10-year-olds pulled a gun while trick-or-treating in Aiken, SC. And 15 people were shot and 2 died in New Orleans on Halloween.

Indeed, trick-or-treating, the best part of Halloween, is dying out across the country as higher rates of “diversity” mean all-white enclaves become a thing of the past—forcing the cancellation of this community-building event.

Even the self-conscious mainstream is beginning to take notice. The Daily Caller’s Mark Judge (he doesn’t post an email address but this is the Daily Caller’s) also happened to be out in Georgetown that evening. (I’m sure we saw him; there were only a handful of white people in a sea of black faces). He writes that he realized the actions of the black people would lead to violence and actually predicted it in an email to himself at 9:42 pm:

“I had gone down to Georgetown to take some pictures and video of Halloween night, which in Georgetown, at least when I was a kid, meant costumes, crowds, bars and fun. Yet as soon as I got down there, I noticed something very disturbing. It is something we do not allow ourselves to talk about for fear of being called racist.”[The predicted Georgetown shooting and the black family, November 1, 2011]

“The PC police will have me over the spit, of course, but liberalism has cost so many lives that I don’t care anymore. The fact is, there were not hordes of white teens and preteens roaming through Georgetown on Halloween. In all of that, no one would have the guts to tell the truth. It was not Asians or whites or Indians who were wilding in Georgetown. It was black teenagers. “

An accurate description of the problem. But let’s see where Judge goes with it.

“Illegitimacy and fatherlessness in black urban areas like Washington, D.C. has created an entire class of youth who have been weaned on gangster culture and have absolutely no impulse control. “

“Every single one of these problems is also a problem with white teenagers, especially considering the rising divorce rates among whites. But whites do not have such a terminal concentration of fatherlessness in such small areas the way blacks who live in inner-city neighborhoods like Washington’s Anacostia do. “

Just when you think we have a believer, on the cusp of swallowing down a hard truth, here is Mark’s brilliant solution!

“We simply have to restore black males as responsible and loving authority figures and fathers in these areas or the same thing will happen every Halloween — and on most other days of the year.”

Hate to break it to you Mark—but we have bankrupted this country trying to reinstall the black male as an authority figure. How do you go about restoring black males as loving and responsible members of society when one-third of them are in prison, on probation, or just out of prison?

Senator Moynihan’s report back in the 1960s noted the correlation between fatherlessness and the welfare state. But this still does not explain the level of violence found among blacks relative to whites.

And this violence already happens “most other days of the year”. Horrible black behavior was on display in Philadelphia, Milwaukee, Cleveland, Charlotte, Chicago, St. Louis, and Peoria throughout this summer.

Strange that conservatives still want to blame these ills on the Great Society and liberalism, although white kids fail to act in the same manner. When was the last time you read where young white kids rushed into a cupcake store in downtown Chicago and then cleaned out an Apple Store of all its iPads?

Liberalism cannot be blamed for the failings of black America. Progressive strongholds like Austin TX, Boulder CO, Portland OR and Seattle WA have some of the nicest, and safest, downtown areas in the entire country.

Mark Judge writes: “Being in the middle of the maelstrom in Georgetown, I was struck by a simple observation again and again: These kids have no impulse control… The behavior that I saw on the part of many of the black teenagers in Georgetown last night was quantitatively and qualitatively different from the behavior of the other people there”.  But he has to cover himself by complaining that the comments section of the news stories would be filled with “racist hate about a ‘chimp out’ and ‘planet of the apes.’”

Similarly, Christopher Orlet [Email him]over at The American Spectator wrote an article asking why the “urban youth” of America don’t have a respect for human life. Headline: “When Teens Attack”. [November 3, 2011]  But, while calling for harsher punishments, he refused to even put a race to the face of the problem that is boldly staring us in the eye.

As long as conservatives are afraid to specify “black” when discussing urban or inner-city problems, then the true source of the problems will not be addressed.

You cannot buy your way out of the problem anymore. If it’s happening in the Northwest DC Whitopia of Georgetown, then it’s going to start happening elsewhere.

If you can’t buy your way out of it, if you cannot bribe it away with shiny after school programs (or midnight basketball) that distract it long enough for you to have a safe trip back to your suburban paradise, then what exactly are your options?

What needs to be done is something the conservative pundits of the “respectable” (read controlled) media refuse to do. An updated investigation that would investigate the effects the variables of fatherlessness, public subsidized housing, welfare, extracurricular programs, and race, have on crime rates. The answers from that could be crushing.

To paraphrase Patrick Bateman from American Psycho: Oh, Africa, Brave Africa is in Our Midst. It’s not a laugh riot. It’s increasingly becoming just a riot.

What I saw in Georgetown was not the byproduct of failed liberal policies. Nor were the restless crowds of black kids with their propensity to violence the product of high illegitimacy rates. It was just Black people embracing Blackness, what the increasingly popular website WorldStarHipHop (which documents the most depraved behavior imaginable, and to which black people religiously upload videos) shows daily.

Just as with Hurricane Katrina, we are beginning to see in this generation of Black Americans just what it means to have the reality of Africa in our midst.

Paul Kersey[Email him] is the author of the blog SBPDL, and has published the books SBPDL Year One, Hollywood in Blackface and Captain America and Whiteness: The Dilemma of the Superhero. He works in political consulting and resides in Denver, Colorado. He thanks Luke Daren for assistance.