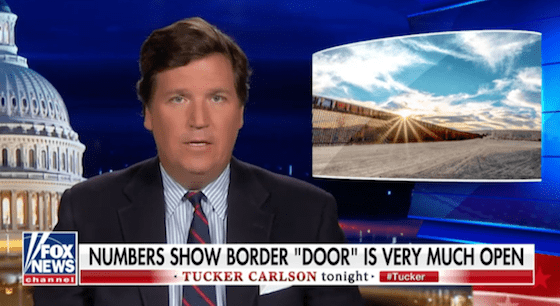 Sometimes it seems extreme to accuse the left of supporting crazy Open Borders. But then some major figure will put his foot right in it, as candidate Joe Biden did recently when he said he would import two million poor foreigners immediately if elected — because America is a sanctuary or something.

Old Joe wants to give something away that doesn’t belong to him — residence in the United States — and the American people’s choice of Donald Trump as president in 2016 shows how many are sick of being the world’s welfare office.

Plus, the world has changed enormously in recent decades. There are billions of poor people in the Third World who would benefit from access to the goodies in America or Europe, but the number of needy people is prohibitive.

What’s also changed is the ease of getting here — from cheapie flights to leftist-organized caravans from Central America to invade this country.

The best thing for all concerned would be to end the immigration rescue mission entirely, because even saving millions as candidate Biden desires would only be a drop in the bucket and would further damage America with still more poor foreigners. It would be better to promote microlending and similar programs that help foreigners stay home and fix their own homelands.

Because they can’t all come here. 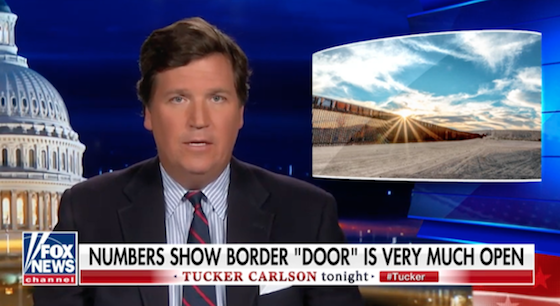 Tucker Carlson was unimpressed with Joe Biden’s generosity, as well as the continuing anarchy on the border.

TUCKER CARLSON: Here in Washington our leaders spent the week focused on the Middle East, on Iran, but out there in the rest of the country there are plenty of more pressing tangible concerns. For example, many of our cities are starting to fail. Infrastructure is aging, both crime and the cost of living are surging, and left-wing prosecutors have stopped enforcing the law. We will have more on all of that in Part Four of our America Dystopia series in just a moment.

But for the leading presidential candidate, candidate Joe Biden of Delaware, none of these problems matches what he believes is the greatest crisis at all: America isn’t importing enough desperately poor people. That’s his position.

In a tweet on January 5th, Biden lashed out at the president for immigration policy, quote: “Our Statue of Liberty invites in the tired, the poor, the huddled masses yearning to breathe free. But Donald Trump has slammed the door in the face of families fleeing persecution and violence.” End quote.

What a moralizer, that Joe Biden. Then just a few months ago, Biden vowed if he becomes president, he will admit two million poor immigrants overnight, and then increase that number from there. Watch.

JOE BIDEN: We can afford to take in a heartbeat another two million people. The idea that a country of 330 million people cannot absorb people who are in desperate need and who are justifiably fleeing oppression is absolutely bizarre. Absolutely bizarre. I would also move to increase the total number of immigrants able to come to the United States.

Biden’s view is our chief mission as a nation is to admit as many poor people as we possibly can. The less impressive their country of origin, the less they are able to contribute to this country, the more we want them. You are rich, they are poor, therefore you must give them money, the right to vote, a permanent home. And once have you done that, repeat.

Biden claims that’s our moral duty, that Donald Trump and anyone else who shirks that duty is a racist.

But, is Trump shirking that duty? Is the basic claim even true? It’s worth assessing — there’s so much lying.

So once again we go to the numbers. Here’s what they are. From October 2018 to September of 2019, the Border Patrol apprehended 977,000 people at the US-Mexico border. That’s the highest total in more than a decade and more than the previous two years combined.

Now, keep in mind, that’s just people being caught at the southern border. many more getting through without getting caught of course. And then there are the tens or hundreds of thousands of others who enter legally but then overstay visas.

These illegal immigrants tethering themselves here with millions of anchor babies. That’s not a talking point, that’s a fact.

According to the Center for Immigration Studies, for example, 372,000 children of illegal aliens were born in this country just last year. Every one of them is now an American citizen, and their parents are benefiting from a whole suite of benefits — food stamps, medicaid, other programs.

Of course they won’t be deported now. Wonder how we got 22 million illegal immigrants? That’s how.

So, by any actual measure, by the data, illegal immigration is worse than it has been in a long time. But for Joe Biden, it’s still not enough — 22 million illegals? Why not thirty million or fifty million? And every one of them gets free healthcare paid for by you. That’s his promise.

Is your country really so spectacularly rich that we can afford this? And, of course you know the answer. We are not a rich country. We are more than $20 trillion in debt. Our middle class is dying, in part because immigrants willing to work for less have driven down wages.

It doesn’t make the immigrants bad. They are coming from incredibly poor places with totally different standards of living. It’s economic fact when you flood the labor pool with people willing to work for less, wages go down, and that’s been going on for decades.

Not surprisingly, America’s most immigrant-heavy state, California, is also the most impoverished. Many people born in California can’t leave quickly enough — ask Idaho and Texas.

But Joe Biden says we need more. According to Biden, our country is a sanctuary, must be a sanctuary for those fleeing violence. But because Joe Biden knows nothing, he is not aware that some of America’s cities are deadlier than the places those people are fleeing from.

For example, El Salvador. One-third of all living Salvadorans live in this country now. But here are the numbers. Salvador has 50 murders per 100,000 people. Last year Baltimore — not a country, the city in Maryland — Baltimore had 51 per 100,000. In other words, it’s more dangerous than El Salvador.

Baltimore clearly hasn’t benefited at all from America’s policy of unlimited immigration. None of this matters because for people like Joe Biden and the rest of this country’s ruling class, helping American citizens, stopping being the point a long time ago. The point is getting re-elected and feeling virtuous.

Well, speaking of, in 2018, Oakland Mayor Libby Schaaf got national attention by warning illegal aliens in her city about impending federal ICE raid.

MAYOR LIBBY SCHAAF: It is a continued perpetuation of a racist lie that immigrants are not valued members of our society. We in Oakland know better. We in Oakland have a community that welcomes and honors all people, no matter where they came from or how they got here.

CARLSON: Oh, she is an incredibly good person, unlike you, racist. Thanks to Libby Schaaf’s efforts, several wanted criminals eluded ICE’s grasp and Oakland became a top haven for illegal immigrants running from the law.

One of those immigrants has now taken a life. According to police, Madisyn Alandra Suzanne White-Carroll, was murdered by Roberto Martinez in a road rage incident last month. By the time police had identified Martinez as the killer, he had already fled the country.