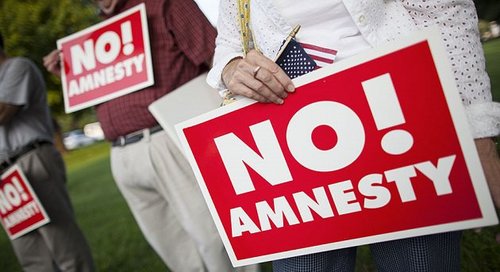 Voters To G.O.P.: We're Just Not That Into Immigrants

For years, Republican candidates have been assured by their political consultants that amnesty is a runaway hit with the public. Then they always come in for a zinger of a surprise when the American people are finally able to express themselves on the subject. (Sometimes it seems as if political consultants are in the game only to make money.)

Washington has tried to sneak through three amnesties in the last decade—in 2006, 2007 and 2013. Each time, amnesty had the full support of the media, the White House, leaders of both political parties, big campaign donors and lobbyists.

And every time, as soon as the public got wind of what was happening, the politicians scattered like roaches and the loudest amnesty proponent in the room would suddenly be demanding "border security first!"

Couldn't Republicans spare themselves the embarrassment of having to say they "learned their lesson" by learning the same lesson of the last 17 guys to push amnesty?

The McCain-Kennedy amnesty passed the Senate in 2006, instantly inspiring an outpouring of voter anger so virulent that it shut down the congressional switchboards. Despite enormous opposition from voters, lame-duck President Bush cockily told reporters, "I'll see you at the bill signing"—the first step to ushering in a Democratic Congress in the upcoming midterm elections.

By contrast, House Minority Leader John Boehner told a group of Republicans that he had "promised the president today that I wouldn't say anything bad about this piece of s— bill."

Weeks later, the chief sponsor of the POS bill, Sen. John McCain, voted for a fence with no hint of amnesty.

A year later, when he was running for president, immigration was the issue dominating the primaries. McCain told voters, "My friends, I learned a lesson." What he had allegedly learned was: "We must secure the border first. We need to do these other things, but the American people want something done about the border."

McCain even cut macho campaign commercials of him walking by the southern border, saying, "Build the dang fence!"

Too little, too late. McCain lost the dang election.

Contrary to liberals' claim that they had finally won the hearts and minds of the people in opposing the Iraq War, leading to the Democrats' 2006 sweep of Congress, a Washington Post/ABC News poll taken about a month into Bush's incessant yammering about amnesty showed that more Americans approved of Bush's handling of the Iraq War than approved of his handling of immigration.

In nearly every poll on Bush's handling of immigration that year, about 60 percent of the public disapproved and only 25 percent approved.

But there was one teensy problem: The public still hated the idea.

You know how people always say "you can't beat something with nothing." When it comes to amnesty, "nothing" outpolls "something" every time.

In early June of 2007, a Rasmussen poll found that support for "no bill" beat support for the Senate immigration bill by 5-to-3. By the end of the week, "no bill" was winning 2-to-1, with 53 percent against amnesty and only 26 percent for it.

Public opposition was so vociferous, the Senate didn't even vote on the 2007 amnesty.

Then, a few years later, erstwhile tea party darling Sen. Marco Rubio burst on the scene deciding he was going to be the one to enact amnesty! Teaming up with everybody's favorite senator, Chuck Schumer, Rubio spent a full year zealously pushing amnesty, which entailed his telling huge, whopping lies about it.

He blanketed the airwaves, convinced Rush Limbaugh and Mark Levin to support the bill, toured all the Sunday morning talk shows. It worked! The Senate passed Rubio's amnesty bill. It was Rubio's only accomplishment in Washington.

But then, unfortunately for him, the public found out about it and, once again, an amnesty bill died. (When will these so-called "voters" stop with their infernal meddling?)

The next thing we knew, Rubio was swearing to attendees at the March 2014 Conservative Political Action Conference that what "I've learned is you can't even have a conversation" about "immigration reform" until "future illegal immigration will be controlled," calling it "the single biggest lesson of the last two years."

A few months later, he told The Wall Street Journal that he wouldn't vote for his own bill if it came up again.

But just before announcing his run for the presidency this year, Christie claimed that he, too, had "learned" more about the issue. He now claims he considers a path to citizenship "extreme" and accused Hillary Clinton of "pandering" by supporting a path to citizenship.

I'd say Christie had to eat his own words on immigration, but that would be a cheap shot.

As governor of Arkansas, Mike Huckabee denounced a bill to require verification of citizenship before registering to vote or applying for public benefits, saying it "inflames those who are racist and bigots." (Voters LOVE being called bigots!)

He made the weird claim that companies like Toyota or Nestle might refuse to invest in Arkansas if the bill became law, by sending the message that, "If you don't look like us, talk like us and speak like us, we don't want you." It might also send the message that we don't want foreigners voting in our elections or collecting public services meant for Americans.

But whenever he runs for president, Huckabee becomes a born-again Minuteman! His current presidential website denounces "the Washington establishment" for trying to "reward illegal immigrants with amnesty and citizenship," adding, "Without a secure border, nothing matters."

Instead of having to keep apologizing for their positions on immigration, maybe Republicans should stop listening to political consultants who are paid by business lobbyists to dump millions of poverty-stricken, low-wage workers on the country.

Out of nowhere, non-politician Donald Trump has shot to the top of the polls by denouncing America's widely unpopular immigration policies. All those high-priced campaign consultants are standing around scratching their heads.

Americans can see they're being forced to subsidize people who are being brought in only to outvote them, provide cheap labor and change our culture. All the donor money in the world isn't going to help you, Republicans, if the voters hate you.