No sane person is holding their breath for the resurgence of flapper skirts or a Harlem Renaissance redux now that the globe’s hit the Roaring 20s 2.0, but there is one movement from America’s 1920s that her 2020s would do well to imitate: An immigration moratorium. Despite what the ‘diversity is our strength’ Democrats and the ‘send us your cartels’ Statue of Liberty might say, America actually has a long history of restricting immigration—and that history proves moratoriums work! 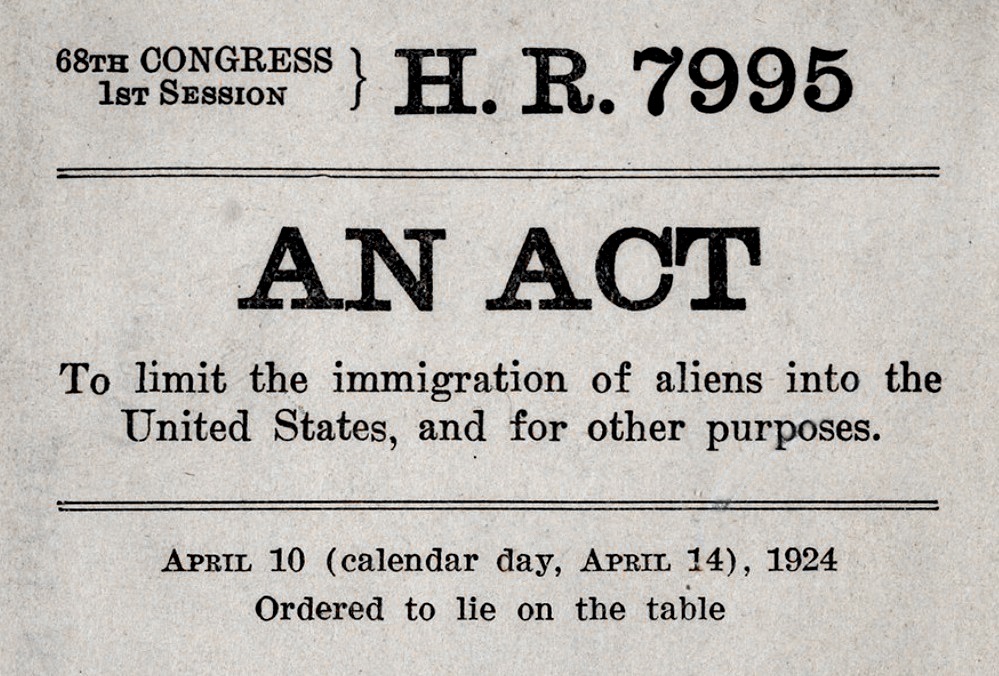 Take, for instance, the Immigration Act of 1924: America’s most restrictive immigration policy, which limited America’s overall number of immigrants and established quotas based on nationality.  Among other things, the 1924 Act sharply reduced immigrants from “undesirable” regions like Africa while completely restricting immigrants from Asia, with a few exceptions.

Congressional leaders at the time were concerned about the large influx of workers willing to do jobs on the cheap. However, the Act also made more visas available to people from places like Britain and Western Europe. The perception (and reality) was that the US had been settled primarily by Western European stock. Fast-forward to the 1920’s and nearly one-third of the American population consisted of immigrants. Meantime, the birth rate among immigrants suggested that their proportion of the population would only continue to rise. (Hmm… Undercutting homegrown wages while outbreeding America’s parent culture… Sound familiar?)

The generation that immediately followed the Immigration Act—the 1940s and 50s—were met with only very minor immigration policy changes, and it was during this period that America's Golden Age took place.

But then, in 1965—without a single ballot being cast on the issue—an utterly transformative policy befell the American people. Under pressure in part from the civil rights movement, Congress passed the Immigration and Nationality Act, a.k.a. the Hart-Celler Act. The Act eliminated the quota system based on nationality and instead prioritized immigrants who already had family members in the US, while also offering protection for so-called refugees. Instead of sourcing immigrants from Europe, most immigrants to the US by the end of the 20th century originated from Latin America, Asia, and Africa—and in far greater numbers.

Despite assurances by Hart-Celler advocates that the bill would add little to the immigrant stream, more than seven million newcomers entered the country legally during the 1980s alone, while that trend has only increased up until today. Meanwhile, illegal immigration began its decades-long surge, as culturally cancerous policies like: DACA, amnesty, dirt-right citizenship, tech overclass visas with pathways to Green Cards, and the diversity lottery, not to mention the lack of a substantial Southern Border Wall have only served to hasten America’s demographic headstand.

And the effects of said demographic headstand have touched every corner of American life:

This, as non-Hispanic white Americans are forecasted to become a minority in America come 2050. Thus, should current trends continue, Republicans will never be able to win a presidential election ever again—thanks to legal (not just illegal) immigration!

Why are Republicans afraid to discuss this? Are they expected to just commit suicide?

And don’t kid yourself: Trump’s Immigration Plan will only delay America’s demographic tailspin by a maximum of 5 years. Which is precisely why only an immigration moratorium will yield meaningful results in the ongoing rapid reshaping of America’s character and culture. And while Trump has breathed life into the cause of immigration skepticism in Washington, it’s unlikely that he’s going to be the guy to propose and push for a moratorium.

Luckily, a new generation of insurgent Republican Congressional candidates understand desperate times call for desperate measures. Take Jarome Bell, of Virginia’s second congressional district, who’s calling for a complete moratorium on all immigration—including the legal variety! Or Peter D’Abrosca whose short campaign achieved tremendous success, taking his message of zero net immigration on to Fox News primetime, before North Carolina’s State Board egregiously had his name removed from the ballot.  And then there’s Joshua Foxworth, running in Texas’s 14th Congressional District. Foxworth wants to end Guest Worker visa programs, build the wall, eliminate the diversity visa lottery and chain migration, and told VDARE.com that he, too, backs an immigration moratorium.

These pro-moratorium Congressional candidates aren’t racists or radicals. They’re patriots, taking cues from their ancestors. Americans throughout history have understood demographics is destiny and have taken muscular policy action to secure their future. President Trump didn’t bring immigration skepticism to America, he just reminded folks of a conversation they’d already been having for over a century—before the political class told us it was forbidden.