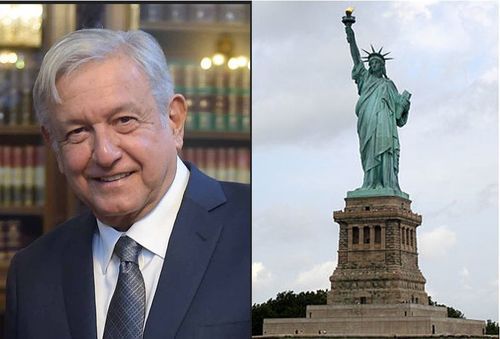 No, AMLO, The Statue Of Liberty IS An "Empty Symbol", And It's Not About MEXICAN Immigration

The President of Mexico sent Donald Trump a letter. As Brenda notes below, this includes the words "The Statue of Liberty is not an empty symbol." We've been debunking this for years, with a whole archive of "Statue Of Liberty, Not Statue Of Immigration" posts.

We've been debunking this for years, me since 2001, Peter Brimelow since 1992. His Time To Rethink Immigration, a 1992 National Review cover story, included this:

. . . Give me your tired, your poor,
Your huddled masses yearning to breathe free,
The wretched refuse of your teeming shore...

—are not part of the Declaration of Independence or some other pronouncement of the Founding Fathers. Instead, they are the reaction of a young Zionist, Emma Lazarus, to the Russian pogroms following the assassination of Czar Alexander II in 1881. They were added years after the dedication of the statue, which was a gift from France to commemorate the U.S centennial and originally supposed to symbolize, not "The Mother of Immigrants" in Miss Lazarus's phrase, but "Liberty Lighting the World"—"liberty under law," adds FAIR Chairman Dan Stein, thinking grimly of recent amnesties for illegals.

And they aren't even true. American immigration has typically been quite selective, if only because the cost of passage was (until recently) an effective filter.