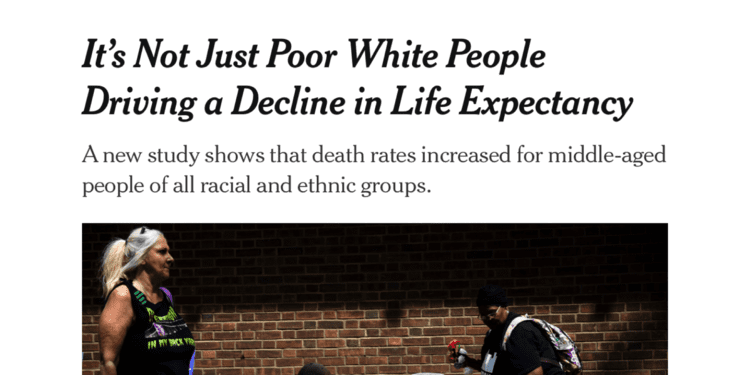 NYT: It's Not Racist to Worry About the White Death Because Now It's Not Just Whites Dying

A new study shows that death rates increased for middle-aged people of all racial and ethnic groups.

As the life expectancy of Americans has declined over a period of three years — a drop driven by higher death rates among people in the prime of life — the focus has been on the plight of white Americans in rural areas who were dying from so-called deaths of despair: drug overdoses, alcoholism and suicide.

But a new analysis of more than a half-century of federal mortality data, published on Tuesday in JAMA, found that the increased death rates among people in midlife extended to all racial and ethnic groups, and to suburbs and cities. And while suicides, drug overdoses and alcoholism were the main causes, other medical conditions, including heart disease, strokes and chronic obstructive pulmonary disease, also contributed, the authors reported.

Fortunately, @UnsilencedSci tweeted out the most important graph from this paywalled study:

Could the similarity of overdose death rates between whites and Native Americans make methamphetamine an inadequate explanation for much higher NA mortality rates? Perhaps deaths related to meth are not always classified as such. pic.twitter.com/cne2Vsb7Io

The worsening death rate among age 25-64 year old American Indians in this century is horrible — up about 30% from eyeballing the graph — and nobody seems to be talking about it. Unsilenced Science has also been tweeting about the collapse in Native American SAT/ACT scores:

I converted all SAT averages to the current scale, going back to 1941.

Meth appears to be the single biggest problem of American Indians in this century, with Mexican cartels targeting reservations as places, due to their complicated legal status, where they can operate with impunity.

But there may be more going on — Indians have dropped off the radar of the mainstream media, with the other kind of Indians now taking up more space in the brain. For instance, this NYT article doesn’t mention Native Americans.

After falling dramatically from the ending of the crack and AIDS epidemics, the black mortality rate turned upwards in 2015, likely due to the Ferguson Effect of blacks celebrating the triumphs of Black Lives Matter by shooting each other more. Lately, blacks seem to be dying of opioids like fentanyl. (The Mexican cartels avoided retailing heroin in cities with lots of black gangs due a feeling that shootings were bad for business, the initially concentrating on quiet flyover places like southern Ohio. By the way, Mexican cartels differ strikingly in how they behave in Mexico versus the US.)

Hispanic and Asian mortality also turned up, but by 2017 looked likely to renew their long term downward trends.

White mortality has been growing since the Great Recession petered out, although it is likely bifurcating by class. My vague impression is that working class whites are following the tragic trajectory of American Indians.