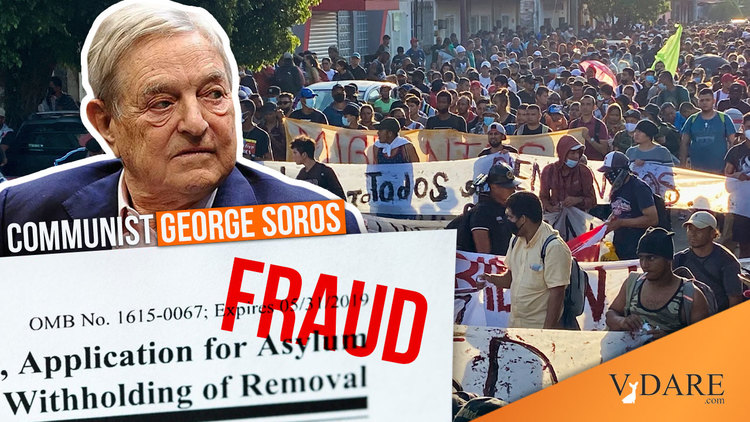 The Treason Bar Let The Cat Out Of The Bag: Asylum Claims Have Been A Scam For Years

If you want to know why the asylum process is a massive fraud, the Treason Bar—lawyers in the immigration-law industry—recently provided the answer, albeit inadvertently. It is refusing to help illegals stuck in Mexico by President Trump’s Migrant Protection Protocols, known as Remain In Mexico, which President Biden terminated but must reinstate, apropos of the U.S. Supreme Court’s order [Immigration Attorneys Say They Won’t Be Complicit In The Biden Administration’s Relaunched "Remain In Mexico" Program, by Adolfo Flores, Buzzfeed, November 4, 2021]. Granted, it’s hard to believe the Treason Bar would turn down “clients.” But the shysters know what they’re doing. Using legal inertia to undermine MPP, they obviously hope to worsen the “asylum crisis” at the border, which would enable them to resume their lucrative role in dispossessing the Historic American Nation with what amounts to legalized illegal-alien smuggling.

Before getting to the Treason Bar’s Kinsley Gaffe and what it’s doing now, a little history about the manufactured crisis financed by communist George Soros and his leftist torpedo, Irineo Mujica:

The conspiracy goes back to the Obama Regime, which encouraged the first border surge in 2014 by rewarding illegal aliens with paperwork that let them leave the border area after they were caught [Illegal Aliens Confused As To Why They're Coming, Federale, March 1, 2016]. When they failed to appear for hearings, kritarchs in the Executive Office for Immigration Review refused to deport them. Of course, that meant illegals had less need for immigration attorneys.

Of course, insiders like me—an immigration officer who handled asylum claims for the old Immigration and Naturalization Service —have always known about the Treason Bar’s scam; i.e., how immigration attorneys coach clients to say the right thing when they do appear for a hearing.

An illegal’s story told at the border changed dramatically once he had an immigration attorney. Indeed, the claims differed as night differs from day. No matter how the illegal crossed the border, at an airport and perhaps even with a fake passport, the alien usually had no coherent story other than fear for his life. In the 1990s, Tamils fleeing the war in Sri Lanka claimed to fear conscription by the Tamil Tigers or oppression by the Sinhalese Buddhists. Sikhs fleeing communal violence in India claimed they would be murdered in the streets. Chinese who claimed they feared the communist regime’s odious policy of forced abortion would say they wanted another child. We couldn’t get real names. Sometimes, an illegal used a false identity cooked up by family in the United States, at least until a Treason Bar attorney came up with an apocryphal tale of persecution.

Problem was, “asylees” never came directly from the nation where they feared persecution; all transited other nations where they did not claim asylum. No matter. Once in custody, an illegal’s obviously false story was recorded in writing, and the alien was scheduled for a detailed interview at the Deferred Inspection Office. Iimmigration officers then processed the illegal for deportation. But at that point, again, the Treason Bar attorney would show up. Lo and behold, the story changed. Forgotten details were miraculously recalled. And the illegal divulged his real identity.

Obviously, the Treason Bar somehow colluded with aliens to manufacture tales of woe, but not just after arrival. I believed they worked on a story before they arrived because family members suddenly appeared to corroborate it. Anyway, now armed with a better yarn, an illegal would appear before EOIR. That’s when the Treason Bar lawyer's pro bono work suddenly ended and he began charging. Families paid, the money rolled in.

Remember, that was back in the 1990s, when I worked for the feds. Yet it continued during the border rush under the Obama Regime, and later under the Trump Administration, when the Treason Bar set up shop in Mexico to “consult” with “clients” before they jumped the border:

Jehan Laner Romero is a San Francisco attorney, one of dozens nationwide who went to Tijuana this weekend to advise the migrants of their rights as they attempt to go through the established legal protocol. Laner Romero says denying entry “is a terrible position for the United States to take. It contravenes international law. We are a beacon of hope.” The attorneys held legal workshops and individual consultations.

The Treason Bar and its Lügenpresse coconspirators even complained when federal authorities detained those who went to the border to help illegals into the country [More lawyers, reporter stopped and questioned at border by U.S. officials, by Julia Ainsley, NBC News, March 18, 2019]. That just happens, by the way, to violate Title 8, Section 1324, of the U.S. Code: Bringing In and Harboring Certain Aliens.

The Trump Administration partially solved that problem with MPP, which Haiti Joe ended. Then he reinstated catch and release, and in turn invited the latest hordes. The U.S. Supreme Court, again, ordered Biden to reinstate the policy.

Even now, as you read this, more illegals march north.

Which brings us back to the Treason Bar’s long-running asylum scam. Its attorneys, as Buzzfeed’s Flores reported last week, refuse to join a list of pro bono lawyers the Biden Regime will provide when it places illegals in MPP:

The immigration attorneys say they won't be complicit in the relaunch of the Migrant Protection Protocols. ... Organizations that help immigrants at the border will continue their work, said Sue Kenney-Pfalzer, director of the border and asylum network at HIAS, the Jewish nonprofit that aids refugees. But signing on to a list created by the administration that will send more immigrants into squalid border camps and crowded shelters than they can represent is a “farce” and a “hollow gesture,” she said.

So like those I encountered in the 1990s, illegals won’t know how to make a credible asylum claim because Treason Bar shysters aren’t there to help. Consider “Felipe,” a Honduran. When he received a list of pro bono lawyers, it was worthless.

“I called the numbers on the list, but no one ever picked up,” Felipe told BuzzFeed News.

Without a lawyer, it's hard to figure out how to fill out asylum paperwork and know what to tell a judge, Felipe said. ...

“The judges were deciding MPP cases unjustly because we didn't know how to do things correctly,” Felipe said.

If Felipe had a real claim, he wouldn’t need an attorney to write it for him. He would simply tell the truth. But illegals are told they need a convincing story. To a certain extent that’s true, given that most illegals admit they left home for economic reasons, not persecution [91.1% of Guatemalans Migrate to the U.S. for Economic Reasons, by Kausha Luna, Center for Immigration Studies August 7, 2017]. They do not have a valid claim, as the Trump Administration noted when it promulgated MPP; 90 percent of asylum claims are bogus [Migrant Protection Protocols, DHS.gov, January 24, 2019].

Of course, Treason Bar attorneys have always known their clients do not fear “persecution” or “death squads.” But the attorneys also know that tales of poverty, while true, are not valid asylum claims. That’s why illegals need Treason Bar attorneys to manufacture a better lie, then help rehearse it. Without that help, asylum claims fail miserably [Without A Lawyer, Asylum-Seekers Struggle With Confusing Legal Processes, by Samantha Balaban, Sophia Alvarez Boyd, and Lulu Garvia-Narvarro, NPR, February 25, 2018].

The Treason Lobby’s only conceivable reason for refusing to help the “migrants” is provoking a “crisis,” which the Lügenpresse will describe with lachrymose tales of “injustice” and “unfairness.”

Then will come the inevitable push to end MPP and reopen the borders, and the Treason Bar will have won again.