The mass importation of foreigners is not a popular policy among average folks the world over. Human nature dictates that people prefer to associate with others who share their values, culture and language. Too much diversity is unwelcome, which is why the liberal press extols it daily.

Canadians apparently think they have enough imported diversity, according to a recent Forum poll. Seventy percent of those surveyed said that immigration should be limited. That number is not so different from the 2007 Pew poll (World Publics Welcome Global Trade — But Not Immigration) that found 62 percent of Canadians agreed with the statement, “We should further restrict and control immigration.”

How normal of Canadians. Everyone likes their own tribe the best. It’s a hard-wired thing.

Plus, Canada has seen some of the worst diversity immigrants have to offer, like the triple honor killings a couple years ago in an Afghan family. At least the Muslim plot to blow up the Parliament and behead the Prime Minister was busted before execution. However, 12 percent of Muslim Canadians thought the jihadist attack would have been justified. 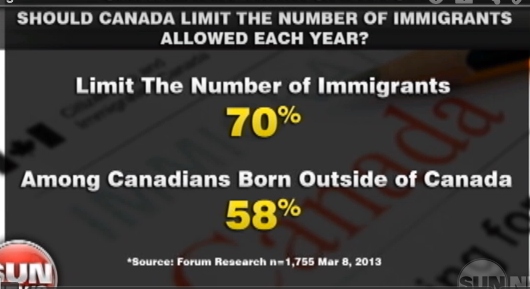 On Monday, SunTV’s Brian Lilley discussed the poll and Canadian values on his show.

For more details on the poll, check out Most Canadians in favour of limits on immigration: poll, National Post, March 10, 2013.