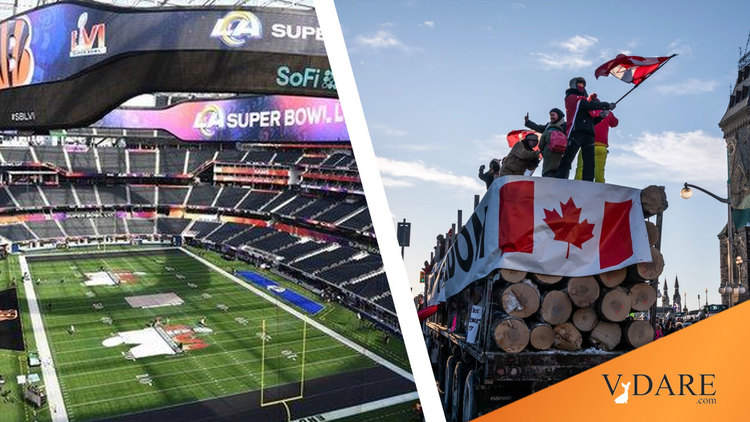 LETTER FROM OTTAWA: Canadian Truckers Send Memo To Elites—You’re Out Of Touch

Gunnar Alfredsson
A+
|
a-

It’s below freezing tonight (February 10) in my hometown of Ottawa, Canada’s Federal Capital, and snow is falling. But Canada’s Truck Protest continues—and (as VDARE.com’s James Kirkpatrick predicted) seems to be spreading across North America, at least according to the (admittedly paranoid) Biden Regime [Truckers may try to disrupt Super Bowl and the State of the Union, DHS memo says, NPR, February 10, 2022]. It may be Canada’s greatest contribution to the Anglosphere since “In Flanders Fields” (of which no young government-school educated Canadians have ever heard).

Ottawa has become the epicenter of an amazing grassroots patriotic uprising of hardworking truckers and their thousands of allies. What began as a nascent protest about vaccine mandates being imposed on truckers from on high by Justin Trudeau’s embattled federal government has become a wider counterrevolution against Leftist authoritarianism, reckless governmental fiscal policy, and wanton disregard for the rights of the citizenry.

Over the course of this pandemic, access to the streets has been explicitly and implicitly denied by Canadian governments at every level—from municipal to provincial to federal—allegedly through fear of COVID contagion, social gathering limits, and outright curfews. Trudeau’s government, while nominally championing human rights, has denied the right of citizens to assemble.

But the convoy’s occupation of downtown Ottawa is a watershed event that is directly linked to Canada’s future. The legitimate grievance held by truckers about vaccine mandates is not just that: it is the culmination of an ongoing struggle between Leftist authoritarian impulses—epitomized by the Trudeau federal government—and the rights and freedoms of the citizenry. More widely, it can be seen as a front in the struggle between globalist and nationalist forces. Trudeau’s regime epitomizes the insidious impulse to replace white citizens with denizens from the Third World through mass migration. Truckers are to be replaced by foreign workers who have been encouraged to migrate to Canada, which has caused deadly havoc on our roads.

The only bulwark against Leftist authoritarianism is a free citizenry who refuse to be Replaced. The working-class truckers occupying Canada’s capital are its exemplars.

The Ottawa convoy has led to other convoys across the country and around the world as COVID-weary citizens across the planet become adamant that their increasingly authoritarian governments have overreached into tyranny. Leftist egalitarian palliatives, mass replacement migration, mass surveillance, and movement restrictions have all been accelerated in the COVID era. Citizens have decided that the government no longer has the right to dictate when to walk and when to run, what vaccines to take, and what papers we must show to go about our daily lives.

Prime Minister Justin Trudeau fled the city. Initially, reports from the increasingly corrupt prestige media in Canada were that he had tested positive for COVID, but we all know that is a smoke screen for his craven cowardice. After widespread reports in media outlets around the world, Trudeau decided to make a brief appearance in parliament on Monday night to vilify the protests: he declared that the Truckers are “not who Canadians are” before he disappeared once again.

Regime Media has mischaracterized the gatherings on the streets of the capital at every opportunity. Canada’s state-owned broadcaster, the CBC, even invoked the specter of Russian meddling to explain the movement [Canada's state broadcaster spreads bizarre conspiracy theory that 'Russian actors' are behind 50,000-strong 'Freedom Convoy' of truckers protesting Justin Trudeau's vaccine mandate, Daily Mail, February 2, 2022].

Significantly, New Democratic Party (= socialist) leader Jagmeet Singh , the son of Sikh immigrants, has even proposed a bill that would “ban hate symbols” ['Hate is being emboldened': Singh on NDP's push to ban hate symbols, by Sarah Turnbull, CTV, February 6, 2022]. The NDP at one time, like the U.S. Democrats, purported to champion the plight of the working man. Those days are gone.

The truckers and their supporters are regular Canadian citizens who not only want draconian COVID mandates lifted, but also want their country back. They have taken legitimate and peaceful action to wrest their country from the grip of a hostile elite.

Typically, the initial reaction from Canada’s Conservative Party was lukewarm. Cuckservative leader Erin O’Toole has been ousted by his own party and it’s no coincidence that his usurpation coincided with the ongoing occupation of downtown Ottawa [Erin O'Toole ousted as leader of the Conservative Party, Ottawa Citizen, February 2, 2022].

But his interim successor Candice Bergen, although professing support, now appears to be backing away [Federal Conservatives reverse course on supporting trucker blockades, call for an end to all barricades, by Marieke Walsh and Ian Bailey, Toronto Globe And Mail, February 9, 2022].

Ottawa police are arresting truckers and seizing their propane and fuel. Video footage on several Telegram channels documented the scenes. People who were supplying fuel to the convoy have also been arrested [Recap of Day 15 of the Truckers for Freedom Convoy, by Harrison Faulkner, True North, February 7, 2022].

In an astounding example of rank hypocrisy, Justin Trudeau and likeminded journalists in the controlled media have denounced these convoys, citing the harm to small businesses and the crippling of Canada’s economy—despite their endorsement of COVID lockdowns that have destroyed small businesses for the last two years [Briones: Truck convoy — In the name of 'freedom,' protesters are killing Ottawa small businesses, by Karla Briones, Ottawa Citizen, February 7, 2022].

But despite their hostile elite detractors, the truckers have gained high profile support from the likes of Jordan Peterson, Elon Musk, Tucker Carlson, and wacky libertarian actor Russell Brand. When GoFundMe confiscated funds raised to support the convoy [GoFundMe refuses to release money donated to Freedom Convoy, by Harley Sims, True North, February 4, 2022], it was met with widespread condemnation from millions of supporters including Florida Governor Ron DeSantis and it was forced to backtrack.

Although the Trudeau government and its allies in the Regime Media, academia, corporations, and their likeminded communistic counterparts across the Western world have nominally hegemonic control over all aspects of life, it is beyond encouraging to witness free citizens, who refuse to be replaced by mass migration, brave enough to mobilize using nonviolent means to win back their country.

It makes me proud to be a Canadian.

Gunnar Alfredsson [Email him] is a writer and researcher based in Ottawa, Ontario.