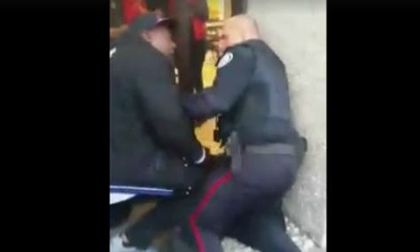 Some Americans are under the illusion Toronto is a multicultural paradise. They've been led to believe Canada is a country that has learned to make mass immigration from non-white countries work. As Kathy Shaidle once pointed out on VDARE.com in response to American libertarian Will Wilkinson, visitors to Toronto don't see the non-white suburbs where the bad stuff happens. [See Toronto A “Multicultural Paradise”? What Was Cato's Wilkinson Smoking?]Those Americans should watch the sixteen-minute long video that accompanies this Joe Warmington story in the Toronto Sun.

Pathetic might be the best word to describe members of the crowd that surrounded a Toronto Police officer who was trying to make an arrest on Friday.

“It’s like they are trying to provoke the officer,” Toronto Police Association president Mike McCormack said Tuesday. “It used to be people would come in to help police, but it seems these days they are coming in with cameras to put it up on YouTube or get in the way of the officer doing his or her job.”

If this treatment of police continues, it will only be a matter of time before there’s another unnecessary funeral.

If you do watch the video, you will hear someone near the beginning talking about another cop in court downtown. They are referring to Constable James Forcillo who is facing a second-degree murder charge for shooting a knife-wielding teen by the name of Sammy Yatim. Yatim, an immigrant, was high on ecstasy and refused to put down his knife.

Sammy Yatim was ‘going to get himself shot,’ accused cop’s partner tells court

“That night . . . was, is and remains one of the most terrifying moments of my life,” Const. Iris Fleckeisen said Wednesday at murder trial of Const. James Forcillo.