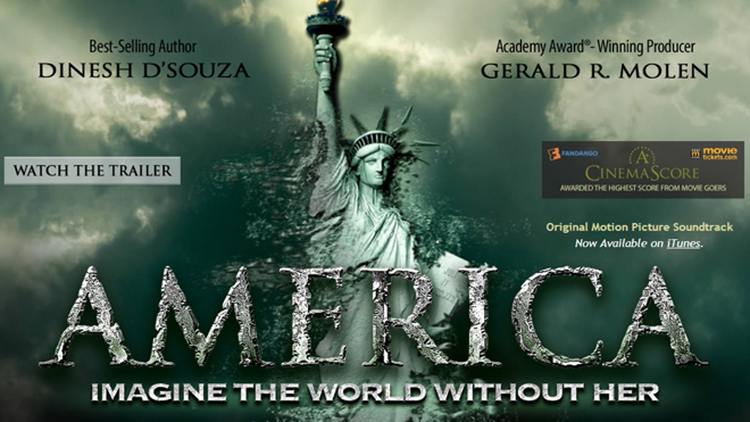 Dinesh D’Souza has again outraged the Left/ MSM by comparing rioters in Ferguson to ISIS, the Islamic terrorist group that just beheaded journalist James Foley. [Conservative Filmmaker Dinesh D’Souza Compares “What’s Going On in Ferguson” to ISIS, by Andrew Kaczynski, Buzzfeed, August 22, 2014] Typically, however, D’Souza’s criticism eschews race and religion in favor of the legalistic claim that both jihadists and protesters are using “perceived injustice” to inflict “new injustices.”

This curious combination of controversy and Political Correctness is characteristic of D’Souza—case in point: his latest film America: Imagine The World Without Her, which essentially tells us that America is the greatest country in the world…because it made possible Dinesh D’Souza.

D’Souza [Email him] is Conservatism Inc.’s master of racial triangulation, an Indian immigrant who smeared Sam Francis and plagiarized Jared Taylor in order to benefit his own career. D’Souza couples sabotaging of these genuine Dissident Right intellectuals with flimsy claims of persecution, as shown by his complaints about discrimination against his products by Costco and Google. [Dinesh D’Souza, Effective Crybaby, by Dave Weigel, Slate, July 10, 2014]

America tells conservatives not to be intimidated by the shaming tactics of the anti-American Left. However, it qualifies this worthy aspiration by ignoring the role of race in both America’s accomplishments and in the motivation of America’s Leftist enemies.

Despite its subtitle, Imagine The World Without Her, it isn’t an alternate history. Instead, D’Souza interviews a number of Left-wing activists, mostly nonwhite, who see America’s existence as a tragedy for so-called Native Americans, Mexicans, and blacks. In contrast, D’Souza identifies himself as an immigrant who “chose” America, and is therefore uniquely qualified to explain its essence to the rubes.

D’Souza summarizes the case of the anti-American Left under five main heads:

D’Souza explores each of these charges in turn, only to dismiss them. Key to his defense is America’s departure from what he calls the “conquest ethic”—that seizing wealth is more honorable than creating it. In contrast, American is exceptional because it stands for building up wealth through commerce and trade. American did not “steal” wealth from indigenous tribes—she created wealth where only warring tribes existed before.

As with D’Souza’s ISIS/Ferguson comparison, this legalistic argument is drawing predictable reactions from the different ideological camps. John Fund at National Review hails the film as “a no-holds-barred assault on the contemporary doctrine of political correctness.” [D’Souza’s America, June 29, 2014] The Leftist Salon, so looney that it frequently mistaken for a parody site, stamps its foot and shrieks, summarizing the film in point and splutter style and comparing its technique to “good ol’ boys swinging Stars n’ Bars” [Dinesh D’Souza’s laughable embarrassment: A review of “America: Imagine the World Without Her, by Elizabeth Stoker Bruenig, July 22, 2014]

Forbes actually condemns the movie on the grounds it veers too much into cultural arguments and is not pro-immigration enough:

Texas is used to allegedly expose Obama’s desire to erase the border between Mexico and the U.S. Who cares that George W. Bush similarly had an enlightened and correct view that immigration is a good thing?

[Dinesh D’Souza’s ‘America’ Will Have Some Conservatives Yearning for Michael Moore’s, by John Tamny, Forbes, July 20, 2014]

[D’Souza] is just an immigrant plagiarist felon with no original ideas. He even stole the opening credit scenes from Conan The Barbarian—paradoxically, as the film’s message denounces the value of conquest.

D’Souza preaches to the choir—and the choir likes being told they are right after all, and America is uniquely special and virtuous.

But what are the actual arguments D’Souza is advancing? He touts America’s supposedly unique ability to replace the “conquest ethic” with trade and wealth creation. In terms of pioneering the modern model of international trade and industrial capitalism, however, Great Britain or even the Netherlands has a better historic claim. And while many Traditionalist societies have looked down on merchants, mercantile empires like the Carthaginians are hardly new.

Other D’Souza arguments are similarly unimpressive attacks on Leftist straw men. D’Souza (assisted by Ted Cruz) briefly outlines the history of the Texas Revolution and how a border dispute sparked the war—but doesn’t discuss the reality that Americans, especially Southerners, really did want to conquer the American Southwest. D’Souza notes that only America fought a deadly war to end slavery—without mentioning that Great Britain ended slavery peacefully before the U.S., or explaining why that was worse.

D’Souza’s defense of American foreign policy baldly states that Americans are trying to help the rest of the world and don’t steal resources. But his critics don’t believe America wants to just seize conquered territory outright, any more than the British Empire did. Their case is more subtle.

D’Souza’s defense of capitalism will serve against Communists, but he doesn’t address cronyism and the defense of established economic interests practiced by both Republicans and Democrats. Moreover, D’Souza explains how capitalism in India and China is lifting millions out of poverty at the very time capitalism is being challenged in the West. Does this make a society like Hong Kong somehow more “American” than America itself?

Needless to say. D’Souza celebrates the concept of the “Proposition Nation”—advanced here, by, of all people, Bono. America, the Irish rock star insists, is an idea, unlike mere “countries” like Ireland or Great Britain. America pioneered the idea that all men are created equal and capable of building great things if left alone.

However, Bono also notes that these ideas have no “copyright” and have spread throughout the entire world. Does this make America unique or universal? Somehow, D’Souza is telling us, we are both.

D’Souza then moves on to what he sees as the source of the attacks—Saul Alinsky. D’Souza essentially says that Leftists are discrediting the historic American nation in order to pave the way for socialism—D’Souza just blames Alinsky instead of the Frankfurt School. He portrays Alinsky as a cynical mastermind of American politics responsible for creating the tactic of moral shaming. D’Souza then links Alinsky with various political and media figures in a useful demonstration of one of Alinsky’s own rules—personalize the target.

Of course, D’Souza is essentially correct when he points out that the modern Left uses morality as cover for the accumulation of power. More importantly, he quotes Alinsky’s explicit identification of the “white middle class” as the center of power in the country, and the use of moral intimidation by shaming the country with its inability to live up to its founding ideals. Alinsky specifically said “white middle class”—see Rules For Radicals, (1971)p. 184, or his 1972 Playboy interview.

But D’Souza removes the critical word “white” in his own follow-up narration of how the “decent” American middle class was exploited—even though racial shaming is the key tactic.

The film isn’t a total loss. D’Souza notes that to charge whites with “genocide” for American Indians’ deaths by disease is equivalent with charging Asians with genocide for the Black Death.

When I saw the movie, D’Souza also drew appreciative chuckles from the older, white theater audience when he asked if, judging from immigration, more Mexicans wished that the U.S. had seized their entire country outright in 1848.

Of course, the reason we didn’t annex Mexico is the same reason D’Souza’s documentary ultimately fails. America isn’t just an idea, it is a people—historically, a white and racially-conscious people that built the country, created its wealth, defended it from foreign enemies, and took pride in its accomplishments.

Exceptions notwithstanding, America defined itself for most of its history as a white country and the subordinate cultural or legal status of nonwhites was systematic.

But to admit that the historic American nation is a historically white nation would veer into forbidden territory for the Beltway Right. So D’Souza presents a deeply selective history that simultaneously claims the triumphs of white Americans while ignoring racial realities.

Which leads us to America’s most egregious flaw. To escape from this attack, D’Souza scapegoats the South, repeatedly hailing its defeat as fundamental to the identity of the country. Even after denouncing the Obama Regime’s intimidation of political opponents, D’Souza treats us to a panegyric of Abraham Lincoln—the same Lincoln who charged critical newspaper editors with treason, sent military forces to shut down elected legislators, and violated the Constitution in ways that make Barack Obama look like Ron Paul.

D’Souza also pulls the old Conservatism Inc. trick of enlisting Martin Luther King Jr. Of course, King was an avowed leftist who attended Communist organizing camps—the same sin with which D’Souza charges Hillary Clinton and Barack Obama. King would also disagree with D’Souza’s take on foreign policy, having preached that America is “the greatest purveyor of violence in the world.”

What you get after this slick parade of half-truths and lies by omission is a confused and contradictory mess.

But it draws enough on the symbols of the historic American nation  to draw in whites hungry to see a movie telling them to be proud of their country. It’s just Politically Incorrect enough to get the Left to call it racist—which of course will make whites want to see it more.

But, after all the sound and fury, all it can tell us to do is vote Republican—just the message Conservatism Inc. wants people to hear.