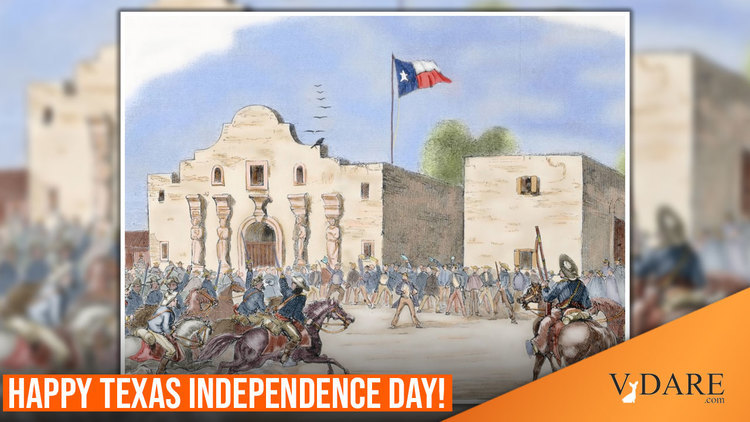 An Angry Mexican-German Reader Attempts To Refight The Texas Revolution

Re: On Texas Independence Day, A Texas Reader Says Reconquista Should Mean Spain Taking Back Mexico!

From: Erick Fuessner [Email him]

The level of arrogance and hypocrisy of some US Anglos is simple amazing.

New Spain (Mexico) and Spain were one and the same from 1521 (the conquest of Mexico-Tenochtitlan) to 1810 (the consummation of Mexican independence).  From 1810 to 1848 adds up to another 38 years, which makes more than three centuries in which those lands were under Spanish-speaking control, until the Mexican American war.

The US sent hordes of legal and (mostly) illegal Anglo immigrants to Mexican Texas (and to Alta California after gold was found there). They did not obey Mexican laws, refused to be assimilated into Spanish culture (encouraged by US diplomatic representatives—does that sounds familiar to today's Anglos?) and remained loyal to the US, dishonoring all previous agreements contracted with the Mexican government:

"In obtaining land grants in Texas, Anglo immigrants agreed to become Mexican citizens, obey Mexican laws, accept the official Catholic faith, learn Spanish, and take other steps to become fully assimilated as law-abiding citizens. However, over the years, it became clear that these settlers, now Anglo-Mexicans, were not becoming integrated into the nation and that Anglo immigration had become a problem . . . The strains and disagreements ultimately led to the Texas Revolution in 1835." [VDARE.com note: This quotation, inserted by Sr. Fuessner, is from the Harvard Encyclopedia of American Ethnic Groups

. It is quoted in Alien Nation as an example of what can happen if you let a sojourning population get out of hand, and has been quoted  more than once on VDARE.com. What we're saying is, we know that.]

Texas' supposed independence in 1836 was never (and still is not) recognized by Mexico because it was won by cowardly and treacherous actions (attacking the Mexican troops in a cowardly way in the night when they were sleeping, surely those Anglo Texans did not have the slightest sense of what honor was in a battle), and the treaties of Velazco and Guadalupe Hidalgo would be absolutely illegal under today's international laws.

The loss of Northern Mexico (Texas, Nuevo Mexico, Alta California, etc) was settled with the end of the Mexican American war, before that those were still Mexican territories. But some US Mormons (some of whom are hypocritical polygamists in today's US) in what is now Utah attempted to enter "El Valle del Lago Salado" and founded Salt Lake City there before the signing of the Guadalupe Hidalgo Treaty, which means they were illegally founded a city on Mexican soil.

Regarding as that was paid with American gold, yes it was but Mexico was forced to accept it against its own free will, if a girl is raped and afterwards her rapist gives her some cash does that make the act more legitimate? Of course not!

Therefore the constant paranoia of some VDARE.com's readers (and other US Anglos) about becoming a minority in Texas in contrast with Spanish people, it is simple poetic justice, it is EXACTLY the same thing US illegal Anglo settlers did back in 1836-1848 in Texas and the rest of the stolen lands when they belonged to Mexico. It is only God's justice, giving the US the payment it deserves for the very same actions it performed about 150 years ago. Life is just, isn't it?

The US as any other nation has every right to demand respect for its sovereignty. But when the US has failed in the past to respect other countries' sovereignty, what is that? Blatant hypocrisy!

A person with a decent level of common sense and education knows that people who wins wars writes and transform history to its convenience, perhaps in a couple of decades US textbooks will say that the 2003 invasion of Iraq was legal, and supported by the UN and many nations before and after finding weapons of mass destruction there.

No matter how many biased facts or dates you quote or want to firmly believe, the day in which you will convince any Mexican or Latin people for that matter that the US legally acquired or purchased Texas, California, New Mexico or that BS WILL NEVER HAPPEN, they were illegally invaded and conquered!!!

Anyway the US should be given back to England if you are going to start arguing about Mexico being given back to Spain with biased arguments regarding historical events.

Despite the fact I am a native Spanish speaker I am writing this in English because it is very unlikely to find an average US Anglo citizen (I am talking about ordinary people not professors or businessmen for that matter) who can speak at least one foreign language in a fluent way.

Have a nice day, xenophobic freaks!!!

James Fulford: I have carefully corrected all Sr. Fuessner's errors in English grammar, but not changed or left out any of his points. Most of them are wrong, and some contain errors of fact.

I will take the trouble to deny that night attacks, whether carried out by the Texas revolutionaries, George Washington, or modern-day Special Forces, are cowardly and treacherous. In fact, they are daring and reckless—the kind of thing a band of gallant revolutionaries will undertake against a decadent imperialist regime.

And calling the Salt Lake City area by its Spanish name doesn't change the fact that when the Mormons trekked there, they found no Mexicans or Spaniards, only Ute Indians.

The point I was making is that while the governments in Mexico City and Madrid might call a lot of the land north of the current border "Mexican soil" they had no more settled most of it than the US has settled the face of the moon.

However, the reason we're printing Sr. Fuessner's letter is to let people know that this how a lot of Mexicans think. It's what's taught in Mexican schools, and for that matter in some "bilingual" American schools, and more and more people who think like this are coming to America to live.