Demography Is Electoral Destiny—Will Midwest Niceness Be A Problem For Trump?

What accounts for Trump's relatively poor showing in Wisconsin? There were of course plenty of explanations on offer.

Lion of the Blogosphere gave us the most succinct one: There just aren't enough blacks in Wisconsin, he said. The theory is, where you have a lot of blacks, whites go tribal. Here I get to quote one of my favorite statistics from the 2012 general: Whites in Mississippi went 89 percent for Romney, while the figure for whites in Vermont was 33 percent.

It's a neat theory, and those Mississippi-Vermont numbers suggest it's not an empty one. It's hard to make it work for last week's Wisconsin vote, though. If you look at the county-by-county voting map, the bigger urban areas, where most of the blacks are — the Mississippis, as it were — all went for Cruz. The more rustic areas with few blacks — the Vermonts — went for Trump. 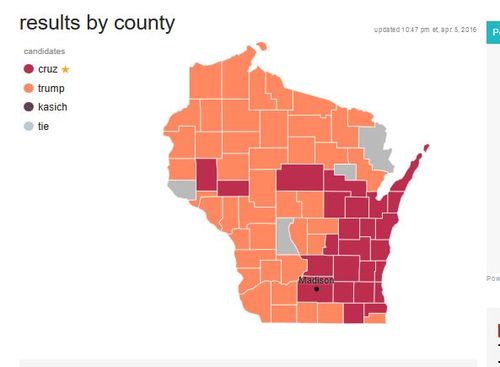 Milwaukee County is 27 percent black against a state average of six percent: Ted Cruz took it, 54 percent to Trump's 26. Contrariwise, Douglas County is 93 percent white, one percent black — practically a little Vermont. Trump took that county by 55 percent to Cruz's 31.

If it's not simply a race thing, though, what is it? Trump's looking strong to win New York April 19th; why couldn't he win Wisconsin? New York Republicans are more Trumpish than Wisconsin Republicans? What's up with that?

I more and more think that Midwestern niceness is a serious national problem. You Midwesterners are so damn nice. I go out there to Iowa, Nebraska, the Dakotas, Wisconsin, the niceness is overwhelming. Seldom is heard a discouraging word.

When I hear Lefty imbeciles like that Virginia Tech President the other week sputtering about how Charles wants to round up blacks, put 'em in cattle wagons, and ship them off to slave labor camps, I just fall around laughing. I don't know any person in the world less likely to contemplate any such thing than Charles Murray—certainly nobody on the Left, which pretty much invented cattle wagons for that purpose. Lenin had the wagons rolling to the slave labor camps years before Hitler showed up.

Donald Trump, in his public persona, comes across as not nice. He's loud, he's flamboyant, he's rude, sometimes coarse. He couldn't be less Midwestern. I'm surprised he got as many votes as he did in Wisconsin.

There is actually a paradox there. People around New York who have dealt with Trump, some of them known to me personally, are unanimous that he is in fact a perfect gent. I don't have such good second-hand data on Cruz; but the rumors wafting over from Washington, D.C. all say that Cruz is universally detested. I suppose that might be spin from political enemies, but it's not a usual thing to hear in a Presidential campaign, even a rancorous one like this. These are the mysteries and paradoxes of politics.

And while niceness is what you want at the level of personal transactions, I'm not sure I want too much of it in my politics. I nurse a private suspicion, in fact, that Midwestern niceness is America's Achilles heel, and will bring down our civilization one day.

But this is the point where my Radio Derb audience gets restless. I can hear them muttering out there: Come on, Derb, enough of this speculative arm-waving and impressionistic stereotyping. You boast you're a stone-cold empiricist. Give us some data; give us some science.

All right! I got data! I got science!

The best aggregator of news from the quantitative human sciences is the Unz Review blogger who writes under the name JayMan , and who describes himself as “a second generation Jamaican-American of Black, White (English), and Chinese descent.”

JayMan is a real Drudge Report of the harder human sciences. He puts a lot of work into his posts, fills them with maps, tables, and links to scholarly-quality research, all cemented together with thoughtful commentary and speculation. He mixes it up with critics in his comment threads, too, always in a good-natured way. You might almost think he comes from the Midwest, though in fact he's a New Yorker.

Well, JayMan's been blogging on this year's election. If you only have time for one of his posts, read the one titled The Donald Trump Phenomenon: Part 1: The American Nations.

What does JayMan tell us about Wisconsin? Well, a key idea here is what he calls the American nations. This picks up where David Hackett Fischer's discussion in Albion’s Seed  of "regional cultures," the result of waves of immigration from different parts of the British Isles (and cited by VDARE.com Editor Peter Brimelow in his Alien Nation as evidence of immigration’s lasting effects) left off.

The United States … is divided into several broad ethnocultural regions — nations if you will. 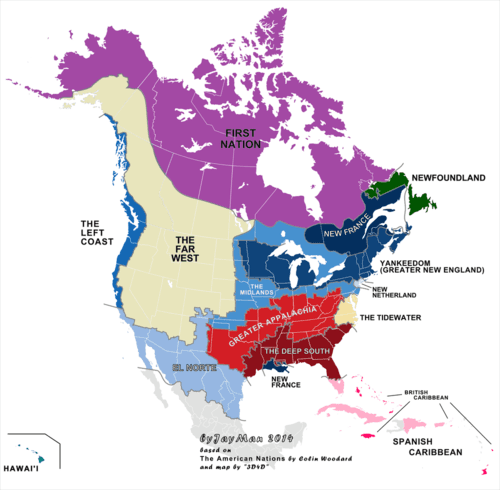 These broad cultural differences are of course the stuff of common conversation, and always have been. We all know that, average-average, New Hampshire Yankees are liable to be more like this while Tidewater Virginians trend more like that, and so on.

What's the origin of these differences? Further quote from JayMan:

These regions exists thanks to the continuing legacy of the founding populations and the various assortative migrations (founder effects and boiling off) that have happened over the history of the country.

There are some terms of art there I'll pause to explain. If a group of humans — or any other species — settles in some region and goes on living there mostly undisturbed for many generations, the "menu" of genetic variation the original founding group brought with them will shape future generations. If the founders had a high proportion of red-heads, there’ll be lots of red-heads in future generations. The same if there's a high proportion of neurotics: neuroticism, like most personality features, is heritable.

We know this from sibling and adoption studies. Anything you can measure about human personality is heritable to some degree.

Here we are back with Tom Wolfe and those Midwestern squares who founded Silicon Valley and put men on the Moon. If some region or group has a distinctive culture, some outliers will find that culture doesn't suit them, so they will leave. You see this with, for example, the Amish. The more individualistic, nonconformist members of the community put down their spokeshaves, shave off their beards, and head for the big city. But the result is that the community they left now has a higher concentration of Amishness.

It's like if you boil off some water from a salt solution. The solution that's left is saltier.

OK, here comes the science. JayMan links to a lengthy paper co-authored by several scholars dividing the U.S.A. into three big zones by a cluster of psychological traits, which they have painstakingly measured. [Divided We Stand: Three Psychological Regions of the United States and Their Political, Economic, Social, and Health Correlates, Rentfrow et al, Journal of Personality and Social Psychology, December 2013.]

The three zones are: 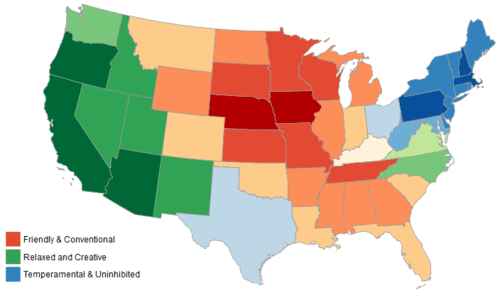 Here in Long Island, I am apparently in the Temperamental and Uninhibited zone. Wow.

California, on the other hand, is Relaxed and Creative. Wisconsin? Friendly and Conventional.

This is Midwestern niceness carefully studied and quantified.

In a big country like the U.S., different founding groups make for different regional profiles on politics — and on everything else connected with human thinking and behavior.

One paradoxical consequence of this, which JayMan mentions in passing: German-Americans, a key founder population in the Midwest, don't much like Trump, his own German ancestry notwithstanding.

The aggressive, brash, colorful Trump is one of those outliers who get "boiled off" to become real estate billionaires in big cities, while the more typical friendly-and-conventional Germans stay back there on the prairie.

Contrast that with Trump's appeal in New York and Massachusetts, especially among Italian- and Irish-American groups. On that three-part schema mentioned above, these are in the "temperamental and uninhibited zone." 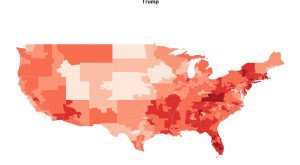 Note the his conspicuous weakness in the "Friendly and Conventional" core of the country.

"Demography is destiny" we like to say out here in the patriotic immigration reform movement. Yes, it is.

If you want to know the electoral destiny of Donald Trump, Ted Cruz, Hillary Clinton, and Bernie Sanders, take time out to scrutinize the demographics of this current Presidential campaign.

It suggests to me that Trump will easily win New York State.  Pennsylvania (New York with Quakers) is in the balance. I’m not clear how the West Coast plays out. 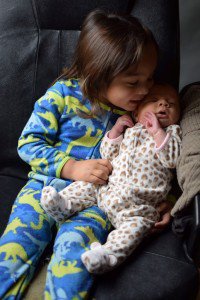 And the general? That depends if there are too many nice Mid Westerners.

JayMan and his wife, by the way, welcomed a new addition to their family on February 22nd. (Pictured right, with big brother JayMan Jr. ) Congratulations there, and may the little one grow up to be as smart and useful as her Dad and Mom.