A year and a half ago I wrote here about my personal blog roll: the blogs I go to more or less regularly in search of inspiration. I included potted reviews of the blogs.

Bloggers come and go. They say all they have to say; or they take a more demanding day job; or start a new hobby; or fall in love; or, I suppose (gulp), are gathered unto their fathers. As VDARE.com always says in its fundraisers, in the long run it’s very hard to write unless you’re paid for it.

New ones come up, though; so from time to time I’ll give you an update.

Of bloggers unmentioned in that November 2012 column, the most interesting one is JayMan. I don’t think I knew his blog at the time. At any rate, I feel sure that if I had known it, I would have included it.

JayMan has blogged at Jaymans.wordpress.com since September 2012. Before that he was for a year or so at one of those white-on-black sites that make your eyes hurt. Before that, he says he was at Blogger.com, though I can find no trace. He seems not to have slowed down at all across his blogging career, keeping up an average seven or eight posts a month, though with lulls and spurts. Interestingly, JayMan is multiracial, describing himself as “a second generation Jamaican-American of Black, White (English), and Chinese descent.” 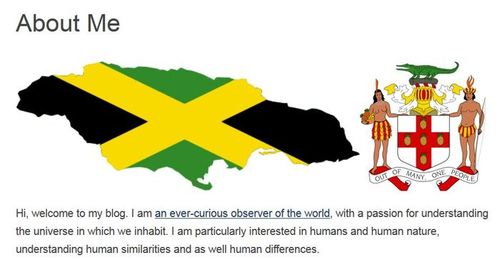 JayMan writes about human nature, with particular attention to human differences. As such he has particular appeal to Us of the Cold Eye. That is to say, he’s a stone empiricist who scoffs at happy talk and wishful thinking about human nature, and goes to the research studies. Just a brief digression here on the nature and content of those studies.

We are now at the point in our understanding where it is beyond dispute that all the interesting traits of human behavior, intelligence, and personality are heritable to some degree.

Heritability is a standard term in biology (actually two terms … but let’s keep this simple). It is a statistic, which means it is a number derived from studying some trait in a population. Think of “mean” (the average) or “standard deviation” (the spread) for some measurable trait across a population.

Heritability is expressed as a percentage (35%), or as a number from zero to one (0.35). To get a “feel” for heritability there is a good visual aid here (Figure 1) showing scatter plots—the measured value of some trait in offspring versus the average of parents’ measures—for traits of heritability 0.1 and 0.9.

Biologists estimate heritability by studying different degrees of relatedness: identical twins, siblings, cousins, adoptees, unrelated individuals. Rigorous studies of this kind have been going on for decades. We have a vast mountain of data on human variability. They all agree on the essentials.

Here, for example, is a short piece on the heritability of adult height, which in well-nourished populations is about 80 percent.[ How much of human height is genetic and how much is due to nutrition? , Scientific American, December 11, 2006]

JayMan seems to know all the studies, and does not suffer gladly people who think that waving their arms and crying “epigenetics!” or “Pioneer Fund!” makes a contribution to any discussion of human nature. His question: What does the data say?

Here he is, for example, in the comment thread to one of hbd*chick’s posts (JayMan is an indefatigable commenter). The point at issue is whether one’s happiness as an adult depends to any degree on the style of parenting you were subjected to in childhood.

The transmission of misery or bliss in a family is entirely due to shared genes, just like most everything else.

The fact that parenting style makes no measurable contribution to the finished adult personality is perhaps the most counterintuitive result in the human sciences. There is nothing more certain, yet there is nothing harder to get across to people—even well-educated people—who are unacquainted with the literature.

Bill Maher, for example, in a TV spot about Amy Chua’s 2011 Tiger Mom book, swallowed the whole parenting-style-shapes-adults shtick. JayMan, who is a fan of Maher’s (more on this below) wrote Maher a long letter setting him straight. The letter is reproduced in the second post here.

Maher did not favor JayMan with a reply to his letter.

Conservatives are even more clueless about the human sciences than liberals. It is for example a perennial theme in conservative social commentary that fatherlessness is the cause of much social dysfunction and many poor life outcomes. If only poor people could be persuaded to get married and stay married!

Sounds nice, and gets your timid conservative commentator off the “racist” hook, since ceteris paribus fatherlessness is much more common among blacks than nonblacks.

Even if there was more marriage among those in the lower class, the next generation, having inherited all the same traits, would be no different. The poor outcomes of children who were raised in fatherless homes stem not from the much maligned single motherhood—in and of itself—but rather from the traits these children inherited from their parents, who were the type of individuals likely to have their children end up being raised by single mothers. [Liberalism, HBD, Population, and Solutions for the Future, June 1, 2012]

So the arrow of causation is not from fatherlessness to poor life outcomes: It is from certain features of the parental genomes inclining to single motherhood and pump’n’dump fatherhood, and thence, by genetic transmission, to similarly feckless offspring.

This latter picture makes much more sense given what we know about the heritability of behavioral and personality characteristics. Which is a lot: JayMan has put together an excellent reference post, spelling it all out, with numerous links.

Some of JayMan’s pieces are masterpieces of blogging, if there can be such a thing. Look at his “Maps of the American Nations” post, for example: two thousand words, twenty maps, two video clips, and full engagement with his comment thread.

At other times JayMan indulges himself in creative speculation: an essential component of the scientific method in physics, geology, cosmology, or medicine, but, as we have learned from Nicholas Wade’s critics, shamefully irresponsible in the human sciences.

I am … not saying that the differences in the situation between the two Koreas have nothing to do with the respective regimes each country happens to be under, or their historical circumstances. But, I am saying that we can’t use the two Koreas as some sort of pure example of a completely environmentally mediated difference in outcome, because we do not know that, and we have no way to know without at least getting some psychometric and/or genomic data from North Koreans.

And JayMan is a gifted polemicist. Here is his devastating comment on an attack on Nicholas Wade by Jonathan Marks in In These Times.

As his affection for Bill Maher shows, JayMan is refreshingly eclectic in his opinions—the opposite of a straight-ticket liberal or conservative. He is an atheist, but a nationalist; a social libertarian who favors the “gay germ” theory of homosexuality.

He describes himself in fact as “very liberal … both socially and economically,” and fleshes that out by posting his scores on a standard multi-factor test of political alignment.

A black, or part-black, HBD maven? I don’t see why not. There are forty million self-identifying blacks in the U.S.A., plenty of room for every conceivable personality type.

That surely includes the dissident personality—the one that listens to the feelgood innumerate data-free blatherings of schoolmarms, politicians, logrolling pundits, and celebrity TV bubbleheads, and responds to it all with: “Hey, that’s not what I see with my eyes. That’s not what data from rigorous research studies tells us. That’s not reality, that’s wishful thinking.”

JayMan doesn’t sound as though he’d identify much with the political Right, but a Dissident he surely is.

On behalf of VDARE.com, I offer him a belated welcome into the Dissident fraternity.

If he finds himself in the New York area with a couple of midday hours to spare, we would be glad to buy him lunch.