One of my favorite stories is when Ralph Abernathy, the man who succeeded Martin Luther King as the president of the Southern Christian Leadership Conference, came forward in the late 1980s and stated what the “Sojourner of Truth” (Senator Ted Cruz’s name for King) was doing the night before he was shot: sleeping with prostitutes and beating another woman up.

People magazine has the whole story:

In three decades at the forefront of the battle for civil rights, Ralph Abernathy had rarely encountered such public virulence. In a withering statement, 28 of his old friends from the movement—Jesse Jackson, Andrew Young and NAACP president Benjamin Hooks among them—accused Abernathy of nothing less than a "dreary attempt to diminish the life and work of the only spiritual genius America has produced," Martin Luther King Jr. From the very pulpit in which King preached, the Reverend Joseph Roberts of Atlanta's Ebenezer Baptist Church excoriated Abernathy and urged his congregation to "do the right thing." Others muttered about a Judas-like betrayal and "30 pieces of silver." The cause of the calumny was Abernathy's recently published memoirs, And The Walls Came Tumbling Down. By supporting longstanding rumors about King's sexual indiscretions, Abernathy had seemingly pulled the walls down upon himself.

The 62-year-old activist, who cradled the dying King after an assassin's bullet cut him down in 1968, did not simply sit still for the criticism. He blitzed through appearances on the morning TV talk shows and sat for a session of Donahue, defending his book at every step. "In all honesty, in all fairness, it happened," he insists. Abernathy's damning charge is that King spent the last night of his life enjoying two successive extramarital liaisons, followed by a knockdown motel-room fight with a third woman. The evening began after King delivered his stirring "I've been to the mountaintop" speech at the Masonic Temple in Memphis. Abernathy writes that afterward he, King and a civil-rights colleague, the Reverend Bernard Lee, went for a late-night dinner at the home of a woman friend of King's. When Abernathy awoke from a postprandial nap in a living-room easy chair at around 1 A.M., he says he found Lee asleep on the couch and King emerging from the bedroom with his female friend.

The three men then returned to the Lorraine Motel, writes Abernathy, where they found King's brother, the Reverend A.D. King, and a black woman legislator from Kentucky who had come expressly to see Martin. King did not disappoint her, according to Abernathy. Finally, at 7 or 8 A.M., King reportedly returned to the room he shared with Abernathy to ask him to help calm a third woman who was, King said, "mad at me. She came in this morning and found my bed empty." Abernathy's implication is clear: King, a married man, had been unfaithful even in his unfaithfulness. When the young woman in question arrived, and her argument with King grew increasingly heated, says Abernathy, the venerated civil-rights leader "knocked her across the bed...and for a moment they were in a full-blown fight, with Martin clearly winning." [A Bitter Battle Erupts Over the Last Hours of Martin Luther King, By James S. Kunen, Jane Sanderson, Tom Nugent, Elizabeth Velez, People, October 30, 1989]

There can be no doubt the actions of Abernathy in attempting to showcase to the world the true Martin Luther King were admirable, but it is the actions of one Ralph Abernathy only two years after he assumed the role of leader of the SCLC from King that help one understand where the “Sojourner of Justice” was headed with his activism. He took a procession of poor blacks to the launch of Apollo 11, with him leading in a mule-drawn cart.

Reverend Ralph Abernathy, King’s successor as the chief agitator for blackness, was lauded in the pages of Jet magazine for his mule-cart procession. Simeon Booker would write:

Rev. Ralph Abernathy, the leader many predicted couldn't fill the shoes of Dr. Martin Luther King Jr., became a giant for millions of Americans at Cape Kennedy. No project he has devised reached more people and served a role as his attendance at the launching of Apollo 11.

There wasn't much enthusiasm among American blacks to follow the moon flight. Even though NASA spent billions in one of its precise managerial operations, its directors  disregarded equal opportunity programs. NASA has one of the poorest minority hiring among U.S. agencies.

While following the activity at Cape Kennedy, a TV viewer sees very few - if any - black engineers, scientists, or computer programmers. On top of this, the vast outlay of money ($24 billion) to put a man on the moon emptied the U.S. treasury of fund for worthwhile earthly projects - like housing, welfare, schools and jobs. 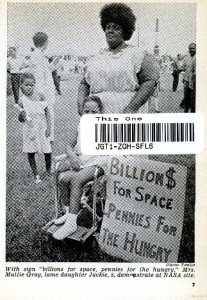 But Rev. Ralph Abernathy followed the example of his leader, Dr. King, to keep the faith. He refused to see millions of black boys and girls "give up" on the American Dream. He had to get to Cape Kennedy. He had to call the Cape "Holy Ground." He had to conclude: "The ground will be even more holy when we feed the poor."

He and his followers bunched together, sang We Shall Overcome - some day. They trooped from the Cape, as the only major Negro participants in the launching.

One highlight of the Cape launching was the confrontation of Abernathy and NASA's Thomas Paine. The meeting took place in an open field just inside the center's front gate. Abernathy, leading two mules humorously named Jim Eastland and George Wallace, was followed by hundreds of poor carrying picket signs. Paine listened to Abernathy's eloquent plea for the poor. Said Abernathy: "I'm profoundly moved by our nation's scientific achievements in space, and by the heroism of the three astronauts." Calling the moonshot "one of man's noblest ventures," Abernathy said: "But I have not come to Cape Kennedy merely to experience the thrill of this historic launching. I am here to demonstrate with poor people in a symbolic way against the tragic and inexcusable gulf that exists between America's technological abilities and our social injustices."

There is literally no greater image needed showcasing the incalculable disparity between the races than what transpired on July 16, 1969 in Cape Canaveral, Florida: when Abernathy pulled up in a cart drawn by a mule to protest the launch of the Saturn V rocket to deliver American astronauts to the moon on the Apollo 11 mission.

Inadvertently in Abernathy’s life, he helped give people in the future hilarious glimpses into a past few currently dare research: the reality of Martin Luther King sexual depravity and the mule cart protest by black people of the Apollo 11 mission.

Had MLK lived, there is no question he would have been leading the protest of the Apollo 11 mission himself.