Can the GOP Get Together in Cleveland?

After winning only six delegates in Wisconsin, and with Ted Cruz poaching delegates in states he has won, like Louisiana, Donald Trump either wins on the first ballot at Cleveland, or Trump does not win.

Yet, as that huge, roaring reception he received in his first post-Wisconsin appearance in Bethpage, N.Y., testifies, the Donald remains not only the front-runner, but the most exciting figure in the race.

Moreover, after the New York, New England, mid-Atlantic and California primaries, Trump should be within striking distance of the 1,237 delegates needed for the nomination. 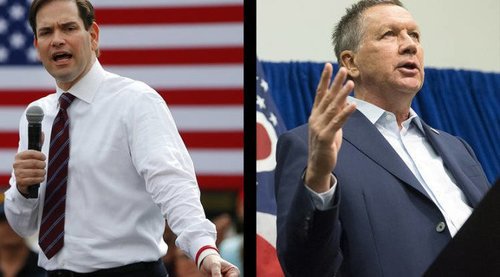 He will then have to persuade uncommitted delegates to back him, and perhaps do a deal with one of the defeated candidates, Marco Rubio or John Kasich, to win the remaining few needed to go over the top.

In 1976, Ronald Reagan, shy of the delegates he needed to defeat President Ford, offered second place on his ticket to Sen. Richard Schweiker, a moderate from Pennsylvania.

This brainstorm of Reagan campaign manager John Sears did not produce the required delegates, and Reagan received an envelope from a conservative Congressman with 30 dimes in it—30 pieces of silver.

Still, Reagan was right to roll the dice.

But assume Trump reaches 1,237 on the first ballot.

Would the GOP establishment accept his leadership, back his ticket, and help to bring together all the elements—nationalist, Tea Party, conservative and moderate—of a grand coalition to defeat Hillary Clinton?

Or would the establishment refuse to endorse Trump, ensure his defeat, and hoping to pick up the pieces of a shattered party, as Govs. Nelson Rockefeller and George Romney assumed they would do after they deserted Barry Goldwater in 1964.

Prediction: If the GOP establishment does collude to steal the nomination from the candidate who has won the most states, most delegates and most votes, not only could the party be crushed in November, but that establishment could be discredited in perpetuity.

For those who have come out for Trump, and have given the GOP the largest turnouts of any party in a primary season in history, will not be give their allegiance to a Beltway elite that cheated them of the prize they had won.

Sullen and angry, they will be going home, not soon to return.

An establishment embrace of a rule-or-ruin course—Better to lose, than win with Trump!—seems irrational. But it is not irrational if one's preeminence and position are the summum bonum of one's political existence.

To avoid the Hobbesian choice—back Trump or abandon Trump—the establishment must block him from a first-ballot victory. And indispensable to the Anybody-But-Trump coalition is Ted Cruz, whom the establishment, if possible, detests even more than Trump.

One testament to the esteem in which Cruz is held is that only two of his 53 Senate GOP colleagues have endorsed him, and one of these, Lindsey Graham, 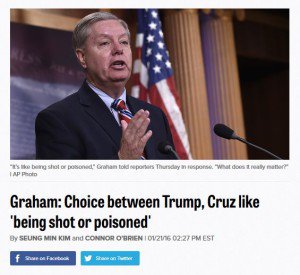 did so as the lesser of two evils.

Here is the second peril for the GOP elites.

If Trump is stopped on the first ballot, the delegates who leave him on the second ballot may go to Cruz, and the stampede could be on.

Yet, it is hard to see how a Cruz nomination is better for the party than a Trump nomination.

For Cruz cannot win in Cleveland, unless the man with the most votes and delegates is deprived of a nomination to which he has a far stronger claim, if this country remains a democratic republic.

A Cruz victory in Cleveland would likely lead to the angry and bitter departure of the Trump delegates, and, in the fall, to a mass defection of the blue-collar, Middle-American Trump voters, especially above the Mason-Dixon line where Cruz is already weak.

The latest poll of Republicans in New York has Trump above 50 percent, with Cruz running third at 17 percent. Even in the South, which was to be Ted Cruz's firewall, Trump beat him repeatedly.

And while Cruz can claim to be a more reliable conservative than Trump, how does that translate into electoral votes in the fall?

Is the Republican establishment, having been repudiated in the primaries in a historic turnout by the party base, now engaged in a willful act of self-deception?

Can that establishment believe it can rob Trump of a nomination he has all but won, then hold off a right-wing Cruz surge that would ensue, then trot out of the stable one of its own, Speaker Paul Ryan, crown him at the convention, and then win in November?

While the GOP appears headed for a train wreck in Cleveland, the principal ingredients of a Republican victory and a Republican future will all be present there: Cruz conservatives and Tea Party types, Trumpite nationalists and populists, Rubio-Kasich-Bush centrists and moderates.

Political statesmanship could yet bring about unity, and victory.

Unfortunately, the smart money is on ego getting in the way.