Rhetorically, Trump Sounds Like Business First, But Practically, He’s America First. Which Is It?

A week ago, President Trump told Fox News’s Laura Ingraham that American companies need more foreign workers. The remark not only concerned and even infuriated immigration patriots but also contravened the Administration’s crackdown on H-1B visas and tightening of immigration rules. In other words, in practice, the Trump Administration puts America first. But rhetorically, Trump sounds like Jeb Bush. It’s time to resolve this cognitive dissonance. If Trump is to succeed in November, he must remember promises he ran on four years ago and quit appealing to corporations who hate him.

As for the talk with Ingraham, make no mistake: Trump was disappointing. “We don’t have a tight labor market,” she insisted, refuting his claim. “If we had a tight labor market, we would be seeing real increases in wages” [In Immigration Debate, Trump Says We Don’t Have Enough American Workers to Fill Skilled Labor Jobs, by Neil Munro, Breitbart, January 12, 2020].

But Trump disagreed. Businesses tell him they need more workers, and so it’s “America First” to reward college-educated foreigners with American jobs. “We have to allow smart people to stay in our country—if you graduate number one in your class at Harvard, [if] you graduate from the Wharton School of Finance,” Trump said. “If we tell smart people to get the hell out, that’s not America first.”

Significantly, after the interview a pro-H-1B Trump tweet from January 2019 went viral on right-wing Twitter. Some who tweeted it (including the great John Derbyshire) mistakenly thought it was from 2020, but in any event it exemplifies escalating concern about Trump’s conflicting messages on immigration. 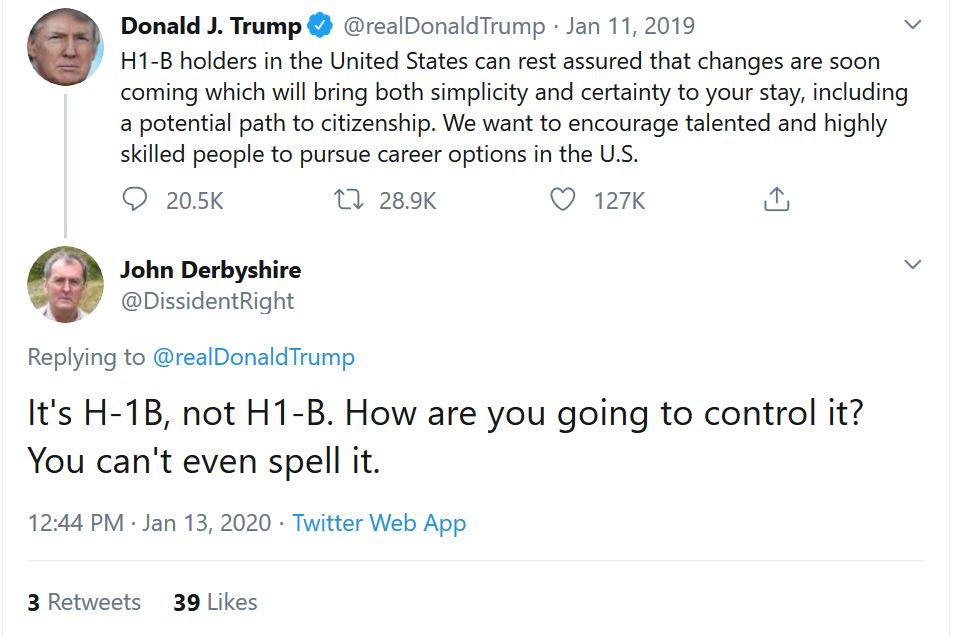 The tweet was symptomatic of Trump’s brief flirtation with an immigration increase last year. “I want people to come into our country in the largest numbers ever, but they have to come in legally,” he said in February’s State of the Union address. During the next few weeks, he repeated similar Chamber-of-Commerce talking points that more and more companies are coming to the U.S. and need more workers. At CPAC, he called for a “merit” system that allows companies to get more immigrant workers.

Kushner’s plan could have been worse. Serious reform proposals included eliminating chain migration and mandatory E-Verify, and making immigration to the U.S. more selective. But the plan didn’t reduce immigration, which made it inferior to the RAISE Act, which would halve legal immigration; Kushner would only increase standards for entry. The higher standards would likely increase the number of H-1Bs to compensate for dramatically reduced visas in other areas.

Kushner seemed to confirm that in an interview with the Wall Street Journal last month [Jared Kushner on Fixing the Immigration System, December 12, 2019].

A lot of these companies that we meet with in the high-tech industry, they want to bring people into this country. They’re opening offices in other places because they can’t get some of their most skilled people who are high wage earners, GDP creators, job creators into the country.

We need a fundamental change to our immigration system. Not just for the high-tech companies, but also for a lot of the different industries in the country.

The “merit-based” aspect of the plan, Kushner said, would help heal the immigration divide in America. But that won’t happen.

Good news is, Kushner’s plan will never pass the current Congress, which is fixated on impeachment and the next election. Still, it’s quite concerning that the president and his most trusted adviser keep using this problematic language about corporate needs.

[T]he 38-year-old talked about her lack of sympathy for employers who lay off workers and then complain that they don't have enough skilled workers. They should have taken the time to “reskill” those workers, she argued. She also advocated for employment opportunities for former prisoner inmates and the need to not over-peddle four-year college as the ticket to career success.

Her workforce portfolio also puts Trump shoulder to shoulder with the likes of Salesforce co-CEO Marc Benioff—to whom she gave a shout-out Tuesday—and Apple CEO Tim Cook, whose firms have signed the White House Pledge to American Workers. Not a bad look for the Trump re-election campaign, even if this conservative misses the days when the right derided “crony capitalism.”

There’s another 2020 angle here. POTUS frequently says that he is a man of America’s “forgotten” workers—and there's his raised-in-Manhattan daughter championing those who don’t have college educations.

But Ivanka Trump aside, corporate chieftains tell him they need more workers. Given that he seems to be influenced by the last person he talked to, if that person is a Big Tech exec who wants more (cheaper) labor, then Trump’s support for more immigration is understandable [Want to change Trump’s mind on policy? Be the last one who talks to him, by Amber Phillips, Washington Post, April 28, 2017].

And to some degree, some Bidenesque self-dealing might be at work. Trump’s businesses use guest workers and continue to apply for foreign labor. Cheap labor benefits his bottom line [The one place Trump wants more foreign workers: Mar-a-Lago, by Alexia Fernandez Campbell, Vox, July 9, 2018].

Still, the Administration has cracked down on the “brainpower” migrants Trump claims to want. Denial rates for H-1B visas are at record highs and rising, thanks to new regulations that prioritize foreign graduates from American universities and increase standards for companies to prove they need college-educated workers.

The impetus for the change was Trump’s 2017 “Buy American, Hire American” executive order, which demanded American companies prioritize American workers. “Widespread abuse in our immigration system is allowing American workers of all backgrounds to be replaced by workers brought in from other countries to fill the same job for sometimes less pay. This will stop,” Trump said when he signed it [Remarks by President Trump on Buy American, Hire American Executive Order, WhiteHouse.gov, April 18, 2017].

Liberals, of course, are enraged. HuffPost has claimed Trump built an invisible wall against immigration [Trump Got His Wall, After All, by Rachel Morris, HuffPost, November 24, 2019]. “It’s really Make America White Again,” Cornell Law Professor Stephen Yale-Loehr [Email him] said of the new rules [Trump Has Built a Wall of Bureaucracy to Keep Out the Very Immigrants He Says He Wants, by Sinduja Rangarajan, Mother Jones, December 2, 2019]. Overall, the immigrant workforce population in the U.S. has begun to decline sharply.

Maybe Miller and Cuccinelli should remind the boss about his campaign promises.

The president isn’t the most consistent leader in American history. He says one thing and does another, as with H-1B visas. But at least the administration hasn’t eased its regulations and Kushner’s plan won’t pass Congress. That means the administration is still protecting American workers.

To win on November 3, Trump needs to talk about that, not lobby for ruling-class corporate elites.