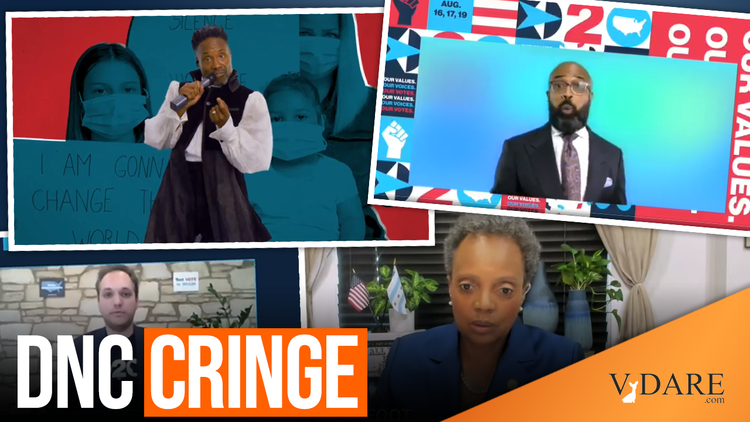 The first night of the Democratic National Convention was a painful thing to watch for any ordinary American. The most important topics of the night were “systemic racism” and defending the Postal Service from fantasy threats.

The most cringe-inducing moment was the bizarre musical performance by gay black singer Billy Williams.

Thanks @theebillyporter + Steven Stills for helping us close night one of the #DemConvention! 🎵

So much more to come! Come back tomorrow ⬇️https://t.co/NEJtNqxFPV pic.twitter.com/vqXfLCUVfk

There were plenty of other cringe-inducing moments that demonstrated the Democrats’ anti-American worldview.

Black pastor Frederick Haynes spoke during a “faith” section of the first day. During his remarks, he condemned border wall supporters to hell.

“You [President Trump] had the nerve to build a wall while at the same time you have in the harbor there in New York a Statue of Liberty saying, 'Give me your tired, your huddled masses yearning to breathe free,' Jesus will say, 'America, if you don't get your act together, you can—you may well go to hell,"  he said. "Why? Because in as much as you do it to the least of these, my sisters and brothers, you are also doing it unto me."

Pastor at the virtual Democratic National Convention says America “may well go to hell” if we don’t have open bordershttps://t.co/PE4ICW2Umg pic.twitter.com/9H01ZY3xau

Another speaker asked viewers to kneel for the playing of the national anthem.

DNC encourages people to kneel for the National Anthem pic.twitter.com/5OlXm2UYvZ

It’s only just the first day and the DNC is already too much to bear. It’s going to be a long week of left-wing radicalism and humiliating performances.