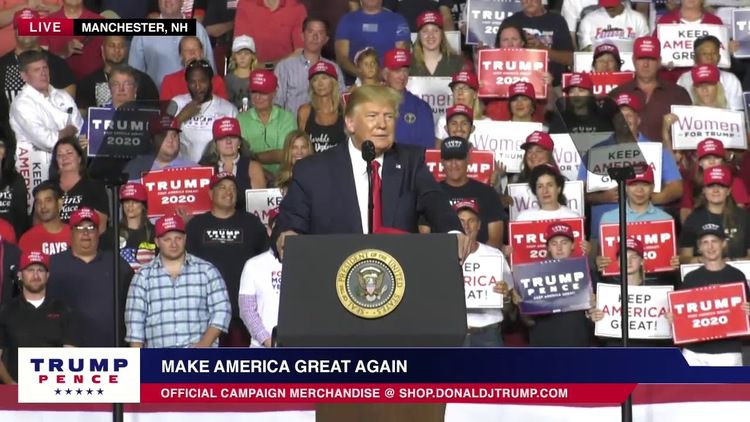 Donald Trump had a rally in Manchester, NH, and spoke about sanctuary cities and Voter ID:

We have serious, serious criminals that want to come in and if we had Open Borders, they would be flowing in like you've never seen before. Democrats want Open Borders, they don't mind crime. We do mind crime and that's the way it is. Democrats also support deadly Sanctuary Cities. Last year alone, Sanctuary Cities declined more than 17,000 requests from federal authorities to hand over criminal aliens already in their custody.

In other words, 17,000 criminal aliens were released by these cities directly into U.S. communities. You don't understand even what the hell are they doing? What are they doing? Seventeen thousand. Republicans believe our cities should be sanctuaries for law abiding Americans, not for criminal aliens, and we will always support the amazing heroes of ICE and Border Patrol and we will always support law enforcement.

Every Democrat candidate also wants to give illegal immigrants free welfare. Republicans believe public benefits should be protected for truly needy Americans not for illegal aliens, and we should reduce our taxes and many other things with all of that money that we're talking about. We need to elect a strong Republican majority to end sanctuary cities.

Stop human traffickers, stop drug smugglers and adopt an immigration system that puts the needs of American workers and families first. It's also time for Democrats to join with us to protect the sacred integrity of our elections by supporting voter I.D. voter ID. It's incredible. They constantly say: oh, we need to protect government they're, not looking for that they're, not looking for that.