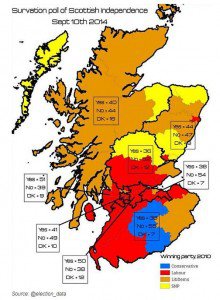 It happens that I know rather well and love the country of Scotland and greatly respect the Scottish people (it would be quite inaccurate to describe the Scots as lovable). So I cannot read happily James Kirkpatrick’s cheerful and alas accurate comment:

Alex Salmond’s Scottish National Party, the driving force behind the independence referendum could better be called traitors to Scotland than authentic patriots. Salmond explicitly and enthusiastically favors more immigration, even claiming that an independent Scotland will be a contrast to a United Kingdom which he claims (ludicrously) is too restrictive.

The signs are that an independent Scotland will vie with Sweden for the title Most Multiculti-Friendly North European nation.

But there are deeper VDARE.com themes at work here. An inspection of the above map reveals that as of September 10th the Independence vote was losing in all the Highland and Lowland areas deemed by everyone including the Scots to be to be quintessentially Scottish. The “Yes” vote is in a majority in the thickly populated industrialized midlands of Scotland.

Why? My expectation is that is where most of the 19% of the Scots who are Roman Catholics live. Most of these are of Irish descent. (The famous and sometimes bloody rivalry between the supporters of the Glasgow Celtic and Glasgow Rangers soccer teams was basically a religious dispute).

An example is the actor Sir Sean Connery, an Irish Catholic paternally, who has managed to combine accepting a knighthood from Queen Elizabeth with supporting depriving her of her Scottish realm.

It is not nowadays PC to mention that the reason the 1707 Union was approved by the Scots was so they could count on the English to defend them against the restoration of the Scottish and Catholic Stuart Kings. The Scottish Protestant majority did not want to be persecuted into extinction as had just happened to the French Huguenots.

When the Scottish Conservative (Tory) Party honored this tradition they were a force in Scottish politics. Now they scorn this stance and have been almost extinguished.