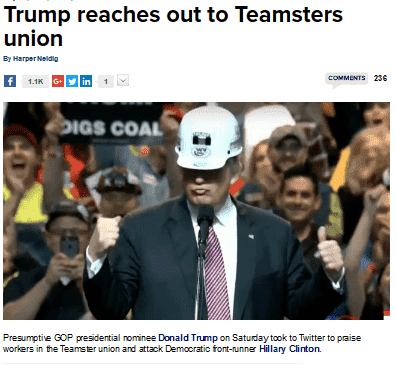 Trump Is Making The GOP Into A Working Class Party

The GOP is a coalition. One part of it is free-trade open-borders business-friendly globalists; the other is protectionist immigration-restrictionist working-class nationalists. The division was perfectly clear in the 2016 election: Never Trumpers versus Trump voters.

This coalition is, as I said, unstable. It's really amazing that it hangs together at all. If the fissure between the two factions opens wide enough, the GOP will stop hanging together. The two factions will then be hanged separately by the gentry-liberal opposition, which hates both of our factions equally. A Kavanaugh defeat would have driven another wedge into that fissure.

The Republican Party, if it's going to survive, has to become a working-class party. That sentence would have sounded bizarre fifty, twenty, even ten years ago; but I believe it's true. Donald Trump is not some kind of weird aberration: he is the GOP's future. And yes, of course I know, he's not exactly a child of the slums: but he voices what tens of millions of working-class Americans believe.

Similar changes are happening all over. Here's a longish quote from British commentator Ed West in the Weekly Standard. Ed is writing about the British political scene, currently dominated by Brexit of course, and he's sounding somewhat Never Trumpish, but he makes some good points along the way. Quotes, slightly edited:

All of these feelings [about mass immigration pushing working-class wages down] drove a sense of anger and despair that resulted in June 2016 when, as John Lydon of the Sex Pistols put it afterwards "the working class have spoken," the [vote to leave the European Union] pushed beyond the 50 per cent mark by large numbers of people who had not voted in years. Indeed it was probably the biggest display of British working class muscle since 1945 when they booted out Winston Churchill in a Labour landslide (a decision which also probably cost the economy dearly).

The working class have also "taken control" of the Conservative Party … the party has lost a huge number of middle-class, liberal "Remainers," [that is, people who wanted to stay in the EU] probably forever.

As of last year Prince William's Kensington Palace home is represented by a Labour M[ember of] P[arliament], the first time in history; meanwhile Mansfield in Nottinghamshire, described by D.H. Lawrence as an "utterly disheartening colliery town" and solidly Labour since 1923—they won close to 70 per cent in 1997—swung to the Tories. And so the low tax, laissez-faire party of Margaret Thatcher is most likely gone forever.[ Turning Britain Socialist To Own the Libs, July 30, 2018]

That all translates pretty clearly into U.S. politics, although the Brexit business has accelerated the shift over there, so they're further down the road than we are now. It won't be long, though, before some U.S. pundit can plausibly write about the GOP that, "the low tax, laissez-faire party of Ronald Reagan is most likely gone forever."

The Democratic Party, like Britain's Labour Party, once represented horny-handed sons of toil—working-class wage slaves. Now it's the party of gentry liberals, college-educated globalists and Silicon Valley capitalist oligarchs. If the Republican Party is going to survive, it needs to shed its own globalists, stiffen its nationalist spine, and fight for its people as ruthlessly as we have seen Chuck Schumer and Diane Feinstein fight for theirs.