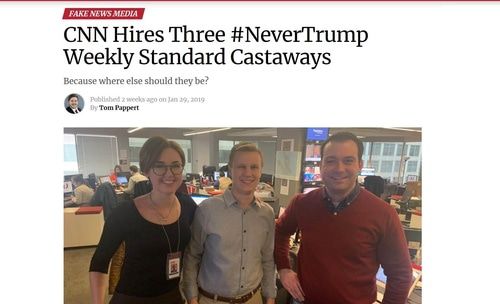 The death of the Weekly Standard saw three of its former writers scooped up into the Main Stream Media: (Haley Byrd, Holmes Lybrand, Mike Warren)  [CNN Hires Three #NeverTrump Weekly Standard Castaways, by Tom Pappert, Big League Politics, January 29, 2019]. After years of subsidies, Conservatism Inc. will probably claim this infiltration as a victory of sorts. But unfortunately the record is now clear: the long-touted strategy of raising money to train “conservative” journalists who would reduce bias in newsrooms has failed. The only way to get the word out: build alternative media, like (to take a random example) VDARE.com.

In nearly every case, the alumni of these “conservative” programs have no impact on their new employer—indeed, they quickly dump “conservatism” in favor of Leftist hackery. Mainstream outlets demand coverage from a Leftist perspective, and putative “conservative” journalists have almost universally obliged in order to advance their career. Careerism is far stronger than ideology. No amount of training from Conservativism Inc. institutions seems able to overcome that.

The National Review Institute, the Daily Caller News Foundation, and Intercollegiate Studies Institute’s Collegiate Network claim to train young conservatives to infiltrate the MSM and have raised considerable sums to do so. Conservative columnist Megan McArdle [Email her] made the classic argument just two years ago:

What would fix the problem [of media bias] is if the folks in the castle made a concerted effort to open the doors and persuade some of the swamp-dwellers to move inside. Not just to move inside, but to help run the place, pushing back on liberal pieties and dubious claims with the same fervor that liberals push back on conservative ones.

On yeah? No other outlet has hired more “conservative” media alumni than CNN—and no outlet is more hackish and Trump-deranged than CNN. The “conservative” presence has had zero influence on the cable network’s coverage. Indeed, its most notable conservative media program alums—Oliver Darcy and Kaitlan Collins—are unmistakable proof that donors are wasting their money in trying to train MSM “infiltrators.”

But now, instead of covering education from a conservative perspective, Darcy’s beat is policing Right-Wing media. He nitpicks and quibbles with the coverage of Fox News and Breitbart and wags his finger when their coverage offends him.

Darcy got his wish when Facebook, YouTube, and other platforms banned InfoWars. The one notable exception was Twitter. Darcy promptly took issue with this. He harassed Twitter officials with alleged instances of InfoWars violating the company’s policy. To Twitter’s credit, the platform ignored Darcy—for a month. [CNN Continues to Lobby Twitter for Infowars Purge, by Charlie Nash, Breitbart News, August 10, 2018]

But Darcy once again got his wish after Alex Jones confronted him on video. Twitter announced this was “harassment” and banned the accounts for Jones and InfoWars permanently.

The banishment of InfoWars was a terrible precedent for Dissident Right media. It established that journalists can successfully bully tech giants into silencing dissidents. Darcy and other MSM vigilantes will certainly use this power again. [Twitter Permanently Blacklists Alex Jones, Infowars, by Joshua Caplan, Breitbart News, September 6, 2018]

In her new manifestation, Collins argues that no respectable person would call themselves a nationalist… because that’s what Adolf Hitler was!

“That is why people do not use the word nationalist! Because it has a negative connotation. It is not the nationalist of Teddy Roosevelt in the 1940s,” she declared. (Teddy Roosevelt died in 1919, a fact apparently not known to CNN journalists or their editors.) [CNN Goes into Full Meltdown Mode Over Nationalist Trump: ‘Hitler Was a Nationalist!, by Justin Caruso, Breitbart News, October 24, 2018]

Her anti-nationalist outburst was not an outlier for Collins. She also falsely reported that Supreme Court Justice Clarence Thomas was accused of sexual assault, she was briefly banned from a White House event after heckling the President, and maintains a Twitter feed that is indistinguishable from a HuffPost reporter. [CNN’s Kaitlan Collins Incorrectly Reports Clarence Thomas Was Accused of Sexual Assault During Confirmation, by Amy Russo, Mediaite, October 9, 2018]

This Leftist costume change has paid off for Collins. Not only is she a rising star at CNN, but her colleagues stand by her when her old tweets and writings surface. Last October, Collins had to issue an apology after old tweets surfaced of her using gay “slurs.” This would have doomed any Fox News reporter, but the CNN correspondent didn’t even suffer a suspension.

She even got most of her media colleagues to defend her, such as The Daily Beast’s Lachlan Markay—oddly, an alum of The Washington Free Beacon—who said it was wrong for conservatives to attack Collins because she is an apparent conservative media success story.

Ummm….maybe conservatives are upset with her that she betrayed them to further her own career?

Apparently, it’s crazy to care more about changing the world than ensuring millennial journalists have successful careers working against your interests.

Woodruff got her start in media as a William F. Buckley Fellow at the National Review Institute, where her writings gave no impression she was a closet liberal. She even made it onto RedAlertPolitics’ top “30 under 30” conservative list in 2013. She was described by the site as a “staunch conservative” in her profile. Coincidentally, this was also a list that also featured  Oliver Darcy—obviously a keeper!

Now Woodruff [Email her]evinces no sign she was ever a “conservative.” Her work on immigration is a testament to this. In a February 2017 article, Woodruff attacked the Beltway herbivore Center for  Immigration Studies as a “far-right group” that promotes “nativism.” Her opening lead mocked CIS as a “tiny think tank with a bland name.” Most of the article was couched in the typical language of Leftist reporters covering immigration—“immigrants’ rights activists” (a.k.a. Treason Lobbyists) and “racist pseudo-science” (a.k.a. race realism). [Trump Making ‘Nativist’ Group’s Wish List a Reality, by Betsy Woodruff, Daily Beast, March 3, 2017]

Woodruff’s July 2016 article on immigration reform groups was even worse. Her opener mocked President Trump for marrying an immigrant, yet wanting immigration policy to put Americans first. She called immigration patriot John Tanton “a virulently anti-immigrant nativist who has associated with white supremacists and dabbled in eugenics.” She quoted no-one even from CIS or the Federation for American Immigration Reform—another notorious Beltway Herbivore—but does give space for an obscure Republican consultant, Liz Mair, to trash them. [Meet the Shady Network of Immigration Opponents Donald Trump Loves to Cite, by Betsy Woodruff, Daily Beast, July 22, 2016]

Woodruff’s conclusion to an allegedly straight-news story leaves readers with no doubt where she stands (now):

It is, in the literal sense, a story of xenophobia—a view of the world predicated on the notion that anyone from a foreign country should be feared.

Woodruff also covered the Alt Right, which she did with insufferable snark and derision. [Alt-Right Leaders: We Aren’t Racist, We Just Hate Jews, by Betsy Woodruff, Daily Beast, September 9, 2016]

Still, that setback hasn’t hurt Woodruff’s career—she continues as one of the Daily Beast’s star reporters and is now (guess!) an MSNBC contributor.

These are just some of the worst examples of “conservative” media program alumni. There are countless others who have made the same transition, just less noticeable.

One conservative program alum long held up as an example of how to make the mainstream media more diverse:

But in the Trump era, Karl [Tweet him] is no different from the rest of the White House press corps and poses the same hackish questions that CNN does. Thus he hounded the president about the recently-deceased John McCain, the establishment media’s favorite Republican. [ABC News' Jon Karl is relentlessly following Trump around to ask about John McCain. Trump is stonewalling him, by Summer Meza, The Week, August 27, 2018]

It’s not just straight news reporters who transition into Leftists once they leave conservative media. So do many of the commentators who find a home in the opinion pages of America’s major papers and cable networks.

Nearly all of them are anti-Trump. The Washington Post’s “conservative” columnists include George Will, Jennifer Rubin [email her] and Max Boot—all vicious critics of the President and his supporters. Not a single one of MSNBC’s “conservative” commentariat ever says a nice thing about the president.

CNN does have Trump supporters as guests, but they are there to be humiliated. The only conservative-leaning commentators who are allowed to share their opinions on CNN are the ones who hate Trump.

The MSM was insistent after the 2016 election that it was trying to diversify their opinion pages. But in reality, they hired like-minded Trump critics (the NYT hired Bret Stephens) who only disagreed on tax policy. An instructive case: Kevin Williamson’s brief tenure at The Atlantic. Williamson was hired to be a writer based on the fact he was an anti-Trump conservative. But when Leftists complained his abortion views were too much to stomach, he lost his job. [Conservative Commentator Kevin Williamson Fired From The Atlantic After Abortion Podcast Surfaces, by Jon Levine, The Wrap, April 5, 2018]

The MSM is only interested in conservative writers who will toe the line and reinforce the Leftist Narrative. They can disagree on topics like deregulation or privatized healthcare. But a no “conservative” writer can dissent against the Narrative on immigration or President Trump.

Far from making the media more fair, “conservative” hires (who are in fact technically well-trained at conservative donor expense) reinforce the biases of these institutions. Too many “conservative” writers are willing to make this Faustian bargain because they’re careerists who don’t care about advancing ideas or changing the world.

Conservatism Inc. “media training” has in effect served as a (profitable) farm league for its worst enemies.

If American patriots must change the media, there is no alternative to creating and solidifying our own institutions—such as, for example, VDARE.com.