In Trump’s America, Is This The End Of George Will?

[See Also: George Will Is Right—Donald Trump IS A Threat, To Cuckservatism Inc] 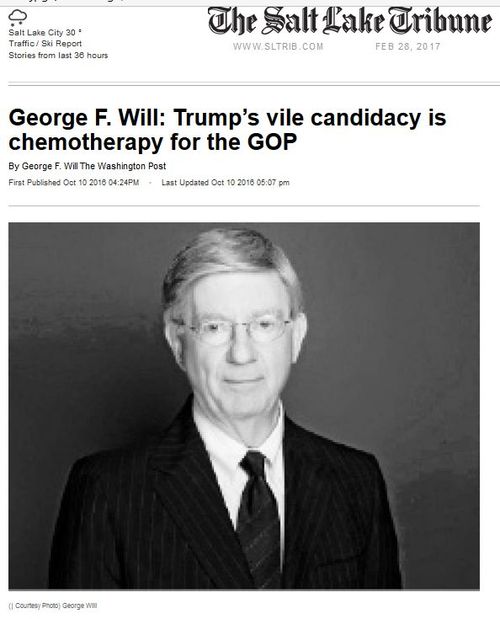 George Will, now 75, lost his job as a political commentator on Fox News, in favor of the pro-Trump Nigel Farage, soon after Donald Trump was elected [Fox Declines To Renew George Will’s Contract by Katherine Rodriguez, Breitbart, January 21, 2017]. To paraphrase Edmund G. Robinson’s famous line: Is this the end of George Will?

Sam Francis once said no conservative pundit had “made it” quite like George Will [The Case of George Will, Radix, June 25, 2016]. His column was syndicated to some 450 newspapers; he has long been a regular presence on television, earned a small fortune on the lecture circuit, and has a closetful of honorary degrees. In 1986, the Wall Street Journal called George Will “the most powerful journalist in America.”

But times have changed. Ever since Donald Trump announced his candidacy in June 2015, George Will, like National Review, waged a feverish “Never Trump” campaign to undermine him. All to no avail. Republican voters ignored Will and gave Trump more votes than any other GOP candidate in history.

So much for the “most powerful journalist in America.” So why has George Will’s influence declined as Donald Trump’s has risen?

The answer is obvious. Donald Trump courageously faced the central question of our time—the National Question. Voters rewarded him with the presidency. In contrast, George Will spent his entire career ducking the National Question. He is likely shocked but he shouldn’t be. In retrospect, it was inevitable and long in the making. 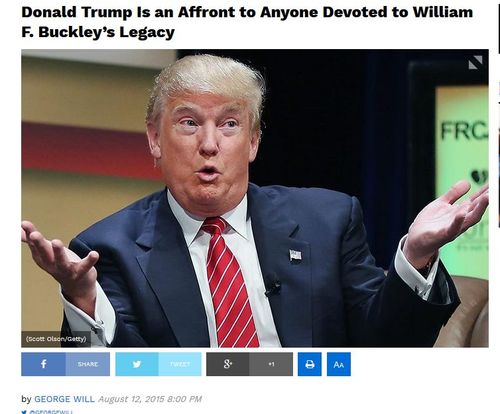 George Will began as a follower of the German-Jewish philosopher Leo Strauss and subsequently became a protégé of William F. Buckley, joining the staff of National Review in 1972. Will, like Buckley, was a “liberal’s conservative” and quickly acquired the coveted role of Token Conservative at the Washington Post, much like the role David Brooks now fills at the New York Times. [The NYT’s Token Conservative of Doubt, by W. James Antle III, The American Spectator, October 15, 2007] The role of such a figure is to articulate non-threatening positions slightly to the Right of the mainstream Left, thus allowing them to display how open-minded they are.

While Will is not exactly a neoconservative (for example, he does not advocate aggressive foreign intervention), he apparently shares their post-American worldview, including a rigid view of America as a “proposition nation.” He also shares the neoconservative desire to maintain “respectability,” epitomized by Max Boot’s famous boast that a neoconservative is “the kind of right-winger a liberal wouldn't be embarrassed to have over for cocktails”. [What the Heck is a Neocon, by Max Boot, Wall Street Journal, December 30, 2002]

That definition could apply to all of Conservatism, Inc. Their highest priority is maintaining their access to television and Establishment social gatherings. But most of President Trump’s supporters want to preserve our country and way of life—not our invitations to Georgetown cocktail parties.

Yet though Establishment conservatives won’t fight the Left, they are fanatically hostile to right wingers who fight for the nation. Will is among those who habitually punch right.

For example, Russell Kirk’s widow Annette Kirk told me she went out of her way to introduce George Will to her husband at a National Review gathering during the late 1980s, but Will refused to speak to Kirk or shake his hand, apparently because of Kirk’s critiques of neoconservatism.

Can you imagine any genuine conservative refusing to shake the hand of Russell Kirk?

Russell Kirk long warned against the danger of conservatism morphing into a rigid ideology. For Kirk, conservatism was rooted in a love of family, community, and country—not in abstract propositions about justice and equality. That is why the neoconservatives disliked Kirk and attempted to smear him as an anti-Semite for making a casual joke about their excessive preoccupation with Middle East policy. (And predictably, National Review chose not to defend him).

Will never understood the immigration issue. (VDARE.com Editor Peter Brimelow reports that Will promised to either blurb or write a column about Alien Nation—Random House chose the column but Will reneged, probably scared off by the intense backlash. Brimelow also believes that Will hasn’t written his own column for years).

By 1992, Will professed the position that Third World immigrants would somehow embrace Jeffersonian ideals. “We are a polyglot nation of immigrants,” Will wrote, “a nation whose unity is based not on ethnicity but on an idea, a proposition”. [A Polyglot Nation United By A Proposition, Baltimore Sun, August 6, 1992]

And he got worse with time. Will had once expressed skepticism of birthright citizenship. [An argument to be made about immigrant babies and citizenship, Washington Post, March 28, 2010] But he now fully supports it. [Trump’s immigration plan could spell doom for the GOP, Washington Post, August 21, 2015]

He also believes that Americans should welcome the tidal wave of child refugees that continue to pour over the southern border. “My view is ‘Welcome to America,’” he said on Fox News. “You’re going to go to school and get a job and become Americans”. [George Will Says US Should Welcome Illegal Children, Mocks Supporters of Deportation, by Brendan Bordelon, Daily Caller, July 27, 2014]

In a speech he delivered last fall, George Will applauded the changing demographics of the country. “I think it’s great. Some people don’t”. [George Will: Trump, White Decline And Why I'm Not Voting For DT Or HRC, by Evan Siminof, Financial Advisor, September 21, 2016]

Actually, most Americans don’t. That’s why Trump won. But Will still doesn’t get it. Indeed, it’s more accurate to say he won’t. He epitomizes the refusal of the Beltway Right to address the National Question—the central question of our time and one to which Will has no answers.

Instead, he offers lazy insults. He called California Assemblyman and gubernatorial challenger Tim Donnelly a “factually challenged fire breather”. [While the President parties, the pundits preen, by Tim Donnelly, Breitbart, July 31, 2014] Pat Buchanan was a redneck. Tom Tancredo is crazy. [Can a Republican Still Win in Denver, by George Will, Washington Post, April 20, 2006] Donald Trump supporters are drooling drunks. [Donald Trump Is an Affront to Anyone Devoted to William F. Buckley’s Legacy, by George Will, National Review, April 12, 2015]

And all the while, Will ignores the substance of their arguments.

Insult comes easily to egalitarians, and egalitarianism is the root of Will’s “conservatism.” Of course, when highly educated people embrace egalitarian ideals, they end up contradicting themselves over and over.

For example, Will claims that the “largest influence on my life’s work” has been his personal hero, Abraham Lincoln. OK—but what about Honest Abe’s plan to remove all freed blacks and colonize them to their “native land” of West Africa?

Will is also a vocal admirer of Dwight D. Eisenhower, whom he describes as a “great man” possessing the “embodiment of reassuring values including decency and bravery.” Will has even called for a special Eisenhower Memorial to be built on the Washington Mall; a memorial that is “consonant with his astonishing achievements and Midwestern unpretentiousness.” [Eisenhower Memorial Is A Monstrosity, by George Will, Washington Post, August 19, 2015]

Fair enough. But would George Will consider Operation Wetback one of Eisenhower’s “astonishing achievements?” In fact, Donald Trump himself says that he will model his own immigration enforcement plan on Eisenhower’s.

More recently, Will again embarrassed himself by describing Donald Trump’s successful attempts to prevent manufacturing jobs from being exported out of the country as “socialism”.  [Trump’s Carrier Deal Is The Opposite Of Conservatism, by George Will, December 7, 2016, Washington Post] What Will means, of course, is not conservatism but classical liberalism.

During the 2016 presidential campaign, George Will became so frustrated with his inability to counter Donald Trump’s political ascent that he decided to leave the Republican Party.

"After Trump went after the 'Mexican' judge from northern Indiana then Paul Ryan endorsed him,” he told Fox News, “I decided that in fact this was not my party anymore”. [George Will Says Trump Message Is What Made Him Leave, Fox News, June 26, 2016]

Actually, that judge is a member of the National Council of La Raza, and Trump was certainly right to call him out on it.

That is why George Will left the Republican Party—because it has become undeniably obvious that Republican voters, for whom immigration is a priority issue, are no longer interested in what he has to say.

Will left the GOP not out of principle, but out of frustration over the fact that his opinion has become largely irrelevant.

As William F. Buckley used to say: “Did You Ever See A Dream Walking?” Yes—George Will walking right out of the Republican Party, and out of the Conservative Movement; hopefully forever.