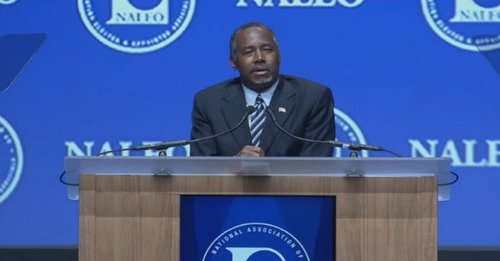 Conservatism Inc. and the Push for Carson

The Republican Establishment is trying to establish Ben Carson as their acceptable “anti-Establishment” candidate.

According to Rich Lowry [Email him] “Ben Carson is a superior outsider to Donald Trump.” Lowry praises Carson for catching “the populist wave roiling Republican politics” while not being “an obnoxious braggart who abuses anyone who crosses him and will say or do anything as long as he's getting attention.” [Ben Carson, The Superior Outsider, Politico, September 2, 2015]

In addition to praising Carson, the GOP Establishment also pretends Carson is on the verge of knocking off Trump. Bill Kristol [Email him] proclaimed, “Republicans have had an exciting summer fling with Donald Trump, and are about to embark on a fall romance with Ben Carson.” [The Democratic Party and Hillary Clinton: Cancel the Wedding?, Weekly Standard, September 6, 2015]

Charles Krauthammer [Email him] won’t even grant Trump this summer, asking “Who knew that this was the summer of Carson? He’s slowly creeping along. No one hears about him. And, you know, yes, of course this is the outsiders.” He praises Carson as the “anti-Donald Trump.” [Krauthammer: Carson A Bizarro World Anti-Trump, Real Clear Politics, August 31, 2015]

But it’s not just Conservatism Inc. promoting this narrative. The Main Stream Media is gleefully eager to portray a surging Carson on the verge of dethroning Trump: A few examples:

Carson’s numbers have gone up, but there’s no evidence that he’s “surging” or is on the verge of taking down Trump. All the aforementioned articles point to a single Monmouth Poll, which found Carson tied with Trump in Iowa. Yet since that poll came out, two others have shown Trump up by 7% and 16%, and the Real Clear Politics average show him up by 7%. [Iowa Republican Presidential Caucus, Real Clear Politics]

Moreover, the Christian Right has an especially strong influence in Iowa—note Rick Santorum and Mike Huckabee won the state in the past two elections. Ben Carson draws most of his support from this group, while Trump is a social moderate. Thus, his campaign will not live or die in Iowa. Indeed, Real Clear Politics polling averages show Trump 14.3% ahead of Carson nationwide, 20% in New Hampshire, and 19.7% in South Carolina.

More importantly, Carson’s rise has not come at Trump’s expense. Carson’s average poll results have gone up from about 6.2% to 13.5% since the beginning of August. However, Trump’s numbers have also gone up from 21.2% to 27.8%. During this same period, Jeb Bush’s support has fallen 3% and Scott Walker’s 7.5%. [2016 Republican Presidential Nomination Polling, Real Clear Politics]

None of these pundits actually want Carson to win the nomination. Instead, they hope he will channel the anti-Establishment energy that Trump created away from Trump himself. In Lowry’s words, “If conservatives want to flirt with an unconventional candidate, Carson provides the opportunity to do it without a guilty conscience.”

It should go without saying that anyone the Establishment promotes this much cannot be an “anti-Establishment” candidate. On the key issue of immigration, Carson’s positions are fully in line with the Establishment. While Ben Carson will say rhetorically bombastic statements about immigration, such as drone strikes on the Mexican Border, his actual policy positions are closer to Jeb Bush than Donald Trump. [Ben Carson open to military drone strikes at US-Mexico border, by Amanda Sakuma, MSNBC, August 19, 2015]

"It sounds really cool, you know, 'Let's just round them all up and send them back.  People who say that have no idea what that would entail in terms of our legal system, the costs - forget about it. Plus, where you gonna send them? It's just a double whammy."  [Ben Carson slams Trump's 'double whammy' immigration plan, CNN, September 9, 2015]

Carson's alternative is to give them amnesty.

In June, Carson spoke before the National Association of Latino Elected Officials. He said that we should “provide” illegals “a way so that they don’t have to hide in the shadows” and “give them an opportunity to become guest-workers–they have to register, they have to enroll in a back tax program.” However “if they want to become citizens they have to get in the line with everyone else.” [Ben Carson: Borders Must Be Sealed to Keep Terrorists Out; Illegals Should Be Given Path to Amnesty, Breitbart, June 18, 2015]

If this sounds familiar, it’s because it’s exactly what Obama supports:

The President’s proposal provides undocumented immigrants with a legal way to earn citizenship so they can come out of the shadows. It holds them accountable by requiring they pass background checks, pay taxes and a penalty, go to the back of the line, and learn English. [Earned Citizenship, White House]

This is not the first time Carson promoted citizenship for illegal aliens. In his 2012 book, America the Beautiful, he asked,

Is it moral for us, for example, to take advantage of cheap labor from illegal immigrants while denying them citizenship? I'm sure you can tell from the way I phrased the question that I believe we have taken the moral low road on this issue. Some segments of our economy would virtually collapse without these undocumented workers—we all know that—yet we continue to harass and deport many individuals who are simply seeking a better life for themselves and their families. Is there a way to apply logic to this issue and arrive at an intelligent solution? [With Liberal Views Like These, Ben Carson's Going to Have a Tough Time Winning the GOP Nomination, by Tim Murphy, Mother Jones, January 28, 2015]

No doubt, stances like these are what make Carson a “superior outsider” to Trump for the GOP Establishment.

Of course, Trump isn’t popular among the grassroots just because he’s an “outsider.” In fact, while he’s a political novice, Trump has long been part of the cultural and business elite, which Middle America hates almost as much as the political class.

Similarly, Pat Buchanan was a consummate political insider, travelling back and forth between the White House and cable news before he ran for president. He was not anti-Establishment because he hadn't held political office; he was anti-Establishment because his stances on trade, foreign policy, immigration, and culture were directly at odds with his fellow Beltway insiders.

In the same way, by taking populist stands on trade and immigration, Donald Trump has gone against the very Establishment he is a part of. As the New York Times’s Ross Douthat titled one of his columns, Donald Trump, Traitor to His Class [August 29, 2015].

Conservatism Inc. thinks that just because Ben Carson is not a politician, he can tap into Donald Trump’s populist rage. Yet so long as he supports the Establishment’s mass immigration policies, don’t expect the GOP grassroots to leave Trump for him.