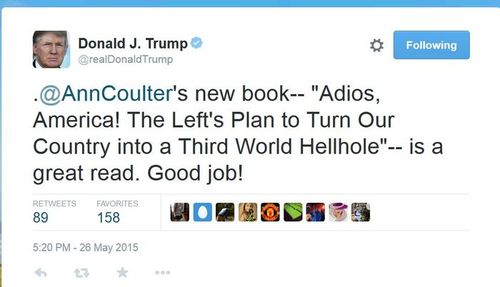 Ann Coulter’s Adios America!  has been the bestselling immigration restriction book in decades.  The presidential frontrunner for the GOP nomination credits it for informing his stance on immigration.  Yet Jerry Kammer, [Email him ] a Fellow at the Center for Immigration Studies Beltway restrictionist think tank, calls it a “work of crude propaganda, a mix of selective truths, exaggeration and falsehood, caricature and conspiracy theory” [Immigration: What Ann Coulter Gets Wrong, Real Clear Policy, July 16, 2015]. Why?

Much of Kammer’s review is indistinguishable from a Leftist Open Borders rant.  After Coulter accurately reports extraordinary crimes in Mexico, Kammer comments “This is nasty stuff. It's malicious hysteria.” But the “nasty stuff” refers to her accurate reporting of the facts rather than the crimes themselves. The bulk of Kammer’s complaint: Ann Coulter using tough language and does not bend over backwards to praise Mexicans.  According to Kammer: “Coulter doesn't seem to like any immigrants except those like her Northern European ancestors. But she is particularly nasty to those from Mexico.”

Actually, Coulter says specifically that African Americans were and are integral to American culture, and she notes that many Eastern and Southern European groups successfully assimilated.  However, she does not pretend that non-Europeans will automatically assimilate to a culture that Europeans created.

Kammer claims that Coulter must think certain groups are “genetically or culturally predisposed to rape.”  He suggests that she would

…benefit from a trip to the Mexican state of Jalisco, where tens of thousands of Americans have flocked to a retirement community that was featured on last night's PBS News Hour. One of the retirees, who happened to be a native of Great Britain, summarized the contentment of her contemporaries when she said the Mexicans who work there “have compassion written into their DNA.”

(So it’s OK to think that some groups have a genetic predisposition to “compassion”—but not “rape”?)

Note that the Brit expat’s quote about compassion referred to staff at his retirement center on Lake Chapala [Why foreign retirees are flocking to Mexico, July 6, 2015]. So Kammer’s proof of Mexican qualities is one retiree praising the help.

And not all retirees in Chapala are happy.  After describing three mass slayings in one month, a USA Today story describes how expatriates in Chapala deal with cartel violence:

"It's paradise lost, at least for the short term," says Steven Miller, a retired Air Force major from Las Vegas who has spent most of the past decade in the Chapala area.

Miller says he's going to reside elsewhere in Mexico, while his companion plans on selling her Chapala-area home. . . . The local real estate association reported having more than 700 houses on the market in December 2011, and a drop in sales of more than 50% . . . ."All you can do is come to work and go home as fast as you can," says Martha Díaz, a mother of seven and cook at the local American Legion post. "Everyone with children is extra careful about where they're going."

As for being “genetically or culturally predisposed to rape,” Coulter merely accurately reports that some groups, such as Hispanics, have higher than average crime rates.  Kammer does not attempt to deny this fact. As with pretty much all social science disparities, there must be either a genetic or cultural cause.  Nicholas Wade, James Q Wilson, and many other leading scholars believe there is a genetic cause to group differences in violence, and so I don’t see anything wrong with discussing it.  However, Coulter does not discuss genetics once in her book.  Here, Kammer is the one engaging in “exaggeration and falsehood.”

(Similarly, Kammer claims that Coulter blames the Hmong influx on Senator Edward Kennedy’s 1965 Immigration Act, although she states clearly that they are post-Vietnam refugees).

According to Kammer, Adios America! sets back the cause of immigration control because “Coulter writes with such venomous hostility toward immigrants and their liberal enablers that most people will turn away from her screed as they would from a street-corner rant” so that “[I]nstead of creating space for the national discussion we badly need to have, she will once again stake her claim to the true-believing and legitimately frustrated Americans who make all her books bestsellers.”

But “bestsellers” is surely the operative word here. While there is a place for muted, wonky, liberal-appeasing criticisms of mass immigration like CIS head Mark Krikorian’s The New Case Against Immigration, there’s also a place for hard hitting books that can appeal to the masses.

This is not Kammer’s first time triangulating against one of the most effective patriotic immigration reformers.  Kammer first came to my attention when he criticized John Tanton for allegedly undermining the patriotic immigration reform movement—which Tanton effectively created—because his Political Incorrectness.  When I first reviewed Adios America! for VDARE.com, I joked

The Center for Immigration Studies’ Jerry Kammer criticized John Tanton for having a “tin ear for the sensitivities of immigration.”

If Tanton has a tin ear, Coulter’s is tungsten.

But my point was serious: sometimes, using strong language gets the point across.  As I noted when criticizing to Kammer’s attack on Tanton, almost all of the most popular immigration restrictionist books have either used strong language and/or discussed the racial-demographic problems with a frankness that Kammer seemingly cannot stomach.  Adios America! continues in this tradition.

(Perhaps significantly, CIS has departed from its usual practice and has not posted Kammer’s Real Clear Politics review on its website. But it hasn’t reviewed Adios America! either—although Mark Krikorian’s review of VDARE.com Editor Peter Brimelow’s Alien Nation was an early example of what appears to be CIS’ institutional strategy of triangulation).

Kammer thinks Coulter and other hard-line immigration patriots are a problem because they may appear hyperbolic to a few NPR reporters. His approach is to bend over backwards to prove how moderate and non-racist he is, while then nicely asking the Open Borders Left to consider the other point of view.

For example, while dissecting a New Yorker puff piece by Jeffrey Toobin on the illegal Flores family, Kammer says piously

For what it's worth, I hope Congress does pass legislation that would allow Flores and millions more like them to stay here. But I think that if we are to achieve meaningful reform, it must match compassion and realism with firm steps to restrain the tens of millions of people around the world whose desperation is so great that they would do almost anything for the chance to live in the United States.

The patriotic immigration reform movement needs to appeal to all types. If I hoped to get wonky liberal to rethink their position on open borders, I’d give him a copy of Krikorian’s book before Coulter’s.

But if I wanted to convince one of the tens of millions of Talk Radio/Fox News listeners with good instincts on immigration, but who still believe the problem with illegal immigration is that it’s “illegal,” I’d give them Adios America! Between the book and her appearances on Fox News and Talk Radio, Coulter has reached millions of patriotic Americans with this vital message.

And if we are ever going to solve our immigration crisis, it will because of people like Ann Coulter inspired the mass of Americans to take their country back—not because a Jeffrey Toobin has a few second thoughts.