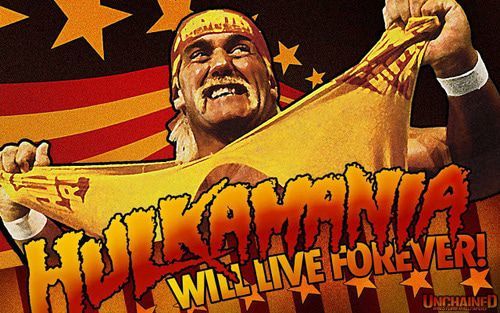 PC Stronger Than Hulkamania… For Now It’s a bad week for wrestling fans, as Rowdy Roddy Piper is dead, and we learned that even Hulk Hogan is no match for Political Correctness. Like a Soviet official who has fallen out of favor, Hulk Hogan (pictured right, in happier days) has been airbrushed from the history of World Wrestling Entertainment, the company he turned into a global force, and whose owner, Vince McMahon, he turned into a billionaire. Yet the WWE’s decision may prove short-sighted, as the company and its owners remain vulnerable to a Politically Correct crusade despite disavowing their most legendary superstar.

Hogan was the breakthrough star of professional wrestling, a hero to children of the 1980s and 1990s who followed his advice to “train, say your prayers, and eat your vitamins,” so they too could be a “Hulkamaniac.” Hogan headlined the first nine Wrestlemanias, an event that serves as the WWE’s Super Bowl. He transcended professional wrestling and broke into Hollywood, most notably in Rocky III, eventually becoming a symbol of Americana. Indeed, Donald Trump was introduced before 15,000 people at his recent speech in Phoenix to Hulk Hogan’s iconic ring-entrance music, Real American. 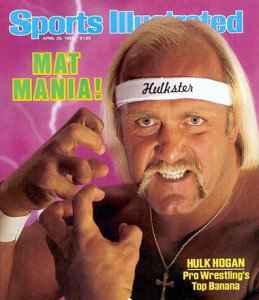 Hogan was featured on the cover of the April 29, 1985 issue of Sports Illustrated and recently was one of the figures interviewed in the “Where are they Now?” feature of the same magazine [Sports Illustrated Features in-depth look at WWE, WWE [Google Cache], June 30, 2015, Accessed August 3, 2015].

But the official website of the WWE no longer links to this piece. Hogan is now in the same category as Paula Deen, a corporate liability. His crime: In a recorded private conversation back in 2008, which is now the subject of litigation, Hogan uttered the dread N-word.

"WWE terminated its contract with Terry Bollea (aka Hulk Hogan)," the company said in a statement Friday morning. "WWE is committed to embracing and celebrating individuals from all backgrounds as demonstrated by the diversity of our employees, performers and fans worldwide." The WWE has not confirmed the specific reason for ending its contract with Hogan. According to a "joint investigation" by the  National Enquirer and Radar Online, the decision came down after additional footage from Hogan's 2012 sex tape leaked, showing the wrestler making racist comments about his daughter Brooke's boyfriend, whom he believed to be black. "I’d rather if she was going to f— some n—er," Hogan reportedly said on the tape. "I’d rather have her marry an 8-foot-tall n—er worth a hundred million dollars! Like a basketball player! The WWE has since scrubbed all mentions of Hogan's name from its website. A source tells THR that a replacement judge will appear in Hogan's place on Tuesday's episode of WWE Tough Enough. Further details will be announced on Tuesday's episode. Additionally, the WWE will no longer air previous episodes of the series that involve Hogan. According to USA Today, Hogan is also no longer present on the WWE Hall of Fame page. All merchandise has been removed from WWEShop.com. In a statement to People, Hogan has apologized for his comments, saying: "Eight years ago I used offensive language during a conversation. It was unacceptable for me to have used that offensive language; there is no excuse for it; and I apologize for having done it." [Hulk Hogan fired from WWE after reports of racist rant, by Katie Wilson Berg, Hollywood Reporter, July 24, 2015] 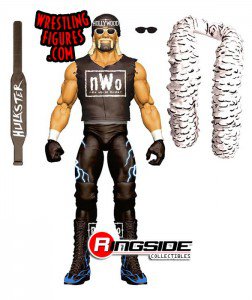 But of course apologizing has done Hogan no good. The WWE is also asking toy manufacturer Mattel to scrap any plans for producing new Hogan action figures [WWE reportedly tells Mattel to scrap production of Hulk Hogan Action Figures, Plus 17 things we learned at comic-con, by Justin Kendall, Between the Ropes, July 27, 2015]. Owner Vince McMahon casually told investors Hogan is no longer with the company because, “we’re interested in people who can actually compete in the ring” [WWE Conference Call Notes: NXT Praise, Vince Addresses Hogan’s Status, More by Larry Csonka, 411Mania, July 30, 2015].

McMahon’s last comment is important because the many injuries the 62-year-old wrestler accumulated during his career have left him physically unable to compete. Having been fired from WWE, Hogan has nowhere else to go and nothing else to do to support himself.

But the story doesn’t end there. Hogan’s lawyer alleges the source of this devastating leak of information is Gawker, the Cultural Marxist gossip site that Hogan is suing for publishing a sex tape of him that he claims was recorded without his knowledge. Gawker denies the charge, but has had its own difficulties recently after pointlessly “outing” an apparently homosexual married man, leading to a fierce Leftist backlash against the company.

Hogan’s lawyer cited “a potential violation of a protective order,” in accusing Gawker of ultimately being responsible for the leaked information in a desperate effort to stave off the bad publicity the outlet’s received in the wake of a separate, unrelated controversy. Hogan’s lawyer said the embattled celeb has “literally, nowhere else to go” and that the judge is “literally, his only hope for justice.” [‘His Career Is Done': Hulk Hogan Blames Radar Story For Ruining His Legacy In Tense Florida Court Hearing, Radar Online, July 30, 2015]

If Hogan wins the $100 million lawsuit, Gawker may be shut down [Hulk Hogan’s sex-tape lawsuit may shut down Gawker, by Cassam Looch, Metro, July 4, 2015]. He has no way forward but attack.

Yet the WWE may also suffer collateral damage. The company’s stock lost $50 million in the days after the scandal broke [Hulk Hogan Scandal Costs WWE Shareholders $50 million, by Jeremy Thomas, 411Mania, July 26, 2015]. The company is also dealing with at least some backlash from its own (mostly Democratic) fans, as it finds itself having to confiscate Hulk Hogan signs they are trying to bring into events [WWE News: HHH Announces SummerSlam Raffle, Hogan Signs Confiscated, by Jeremy Thomas, 411Mania, July 27, 2015].

More importantly, WWE still has skeletons in the closet. In a 2005 edition of the WWE television program Smackdown!, McMahon publicly used the same racial pejorative Hogan had used privately, in a scripted segment with John Cena, all while a black wrestler was standing close by:

TMZ has spoken to a WWE representative regarding the 2005 segment where McMahon uses the N-word. According to the WWE rep, the 2005 segment “was an outlandish and satirical skit involving fictional characters, similar to that of many scripted television shows and movies.” [WWE Owner Vince McMahon is raging hypocrite, TMZ, July 25, 2015]

This isn’t the first time the WWE has had to play damage control with its history. VDARE.com readers may remember McMahon’s wife and former WWE President Linda was twice the GOP Connecticut Senate nominee, spending more money than any other person in history to seek a federal seat in two useless campaigns.

McMahon was a proto-cuckservative, offering only Beltway Right talking points on immigration, a doomed strategy in a blue state. The only beneficiaries were the consultants. Yet McMahon couldn’t even run a “safe” and non-controversial campaign because gleeful Democrats were able to exploit the WWE’s controversial past, even though the company tried to delete past footage [WWE Scrubs ‘Dated and Edgier Footage,’ Amid Linda McMahon’s Connecticut Senate Campaign, by Nick Wing, Huffington Post, September 14, 2012].

We may expect similar attacks in the future for WWE. Investors should not be surprised if the likes of Jesse Jackson or Al Sharpton start demanding payouts. Indeed, the Main Stream Media has already attacked the industry in the past for “racism.” By trying to erase Hulk Hogan from history, McMahon have actually invited further attacks.

For now though, the speed of Hogan’s fall from grace is stunning. There has been only one other WWE wrestler/performer to be effectively erased from the annals of the company: in 2007, Chris Benoit killed his son and his wife, and then committed suicide. Today, Hulk Hogan, for the crime of uttering a forbidden word in a private conversation that was leaked (possibly illegally) to the media, is receiving the same Orwellian treatment.

It’s ominous, but strangely fitting. Professional wrestling, of course, is about illusion, and the character of “Hulk Hogan” once represented a confident and strong America to the naïve American children of the Reagan and Bush years.

But now the illusion is ripped away and we see the truth. It’s not just that childhood heroes aren’t what they seemed to be. It’s that the free country that Americans venerated only decades ago no longer exists.