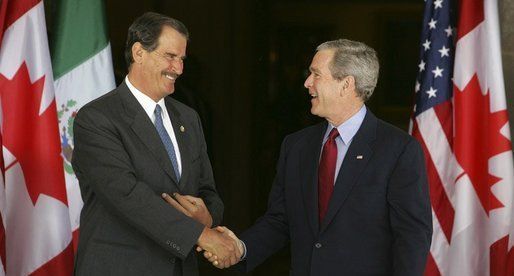 Those Americans whose memory banks have not been totally erased by the horrors of Sept. 11 and its aftermath may recall that only a week before the terrorist attack, Mexico's President Vicente Fox was gallivanting north to badger President Bush for an amnesty for illegal Mexican aliens in the United States and even an actual union of the two nations. For obvious reasons, we haven't heard much out of Mr. Fox recently. Then again, some reasons why for once he has kept his mouth more or less shut may not be so obvious.

Immediately after the attacks, Mr. Fox, like most other national leaders from Britain's Tony Blair to Iraq's Saddam Hussein, expressed regrets about them. But the man who has invited himself to the United States at least half a dozen times since his election little more than a year ago hasn't been seen here since his official visit just before the attacks, and his government has been rather muted in its offers to help U.S. and allied anti-terrorism efforts. Not everyone in Mexico, it seems, is so keen on being amigos with the gringos as Mr. Fox.

No sooner had his administration offered condolences and help, the Mexican Congress began to whine that he had given the United States a "blank check" to do whatever it wanted. Mexican novelist Carlos Fuentes complained that, after all, "we are partners of the United States, not their hangers-on." As of last week, the Australian Broadcasting Corporation reports, street vendors in Mexico City were "making brisk business selling 'bin Laden is my hero' T-shirts." Just whose amigos are these amigos, anyway?

Mexico is not a "hanger-on" when it wants the United States to wipe the slate clean on the millions of illegal aliens who have broken our laws to come here and to dole out welfare, education, health services, special judicial rights and even citizenship to them and their children. It's not a "hanger-on" when it confesses—falsely—that it can't control its own border or the flow of millions of its own people northward across ours, nor when it complains that our own efforts to enforce elementary border security endangers the lives of the immigrants it refuses to regulate. When Mexico demands to be carried on the American back, it's not hanging on. But when, after the most serious attack on the U.S. mainland in our history, we might need a little help from it, it's just a "partner," not a "hanger-on."

President Bush ought to tell this armpit of corruption, economic failure, and political repression disguised as a nation to go help itself for a change and to forget about amnesty and any further concessions on immigration or much of any other matter.  Amazingly, he didn't. No sooner had Mr. Fox expressed his condolences to the president in a telephone conversation than the U.S. president told his Mexican counterpart that he "continued to work on legalizing the situation of undocumented Mexican immigrants in the United States." "I was truly surprised that Bush himself, at such a difficult time, was not forgetting his commitments," Mr. Fox beamed.

Assuming Mr. Fox didn't make up what Mr. Bush supposedly told him, it's really not surprising. At no time since the Sept. 11 attacks by aliens who used lax immigration laws and policies to get into this country has Mr. Bush or any other major member of his administration suggested a tightening of border security or reform of immigration laws. Fixated on the mythology of open borders and a nation of immigrants, none can bring himself to believe that mass immigration itself is what opens this country to terrorism, not to mention Mexico's massive drug traffic.

Immediately after the terrorist attacks, the border with Mexico was effectively closed, and the result has been a huge reduction in the flow of both illegals and drugs. Between Sept. 11 and Sept. 23, the Customs Service reports, 8,700 pounds of illegal narcotics were seized at the border from Brownsville to San Diego.  In the same period last year, the amount seized in the same area was more than 44,000 pounds. So closing the border can reduce the flow of illegal drugs by some 80 percent. The next time the government swaggers about waging "war on drugs" without closing the Mexican border, pay no attention.

Nor to any future blabber about what a great pal the good old country of Mexico is. Having made a mess of its own house, Mexico is merely looking for someone else's hacienda to take over, and its ruling class has decided that since the United States is only next door and looks like a plausible chump, it will do fine. With leaders who still think amnesty for Mexican illegals is a great idea, who's to say they're wrong?