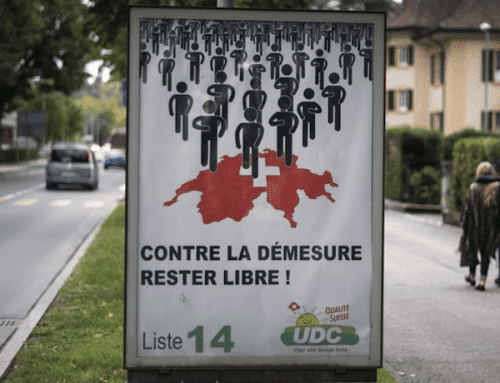 The Swiss have been more sensible than most in who they allow in their small nation, such as in last year’s referendum choosing to limit immigration. On Sunday, the voters strongly chose the Swiss People’s Party (SVP) to register their disapproval of Europe’s illegal immigration chaos.

Al Jazeera reported that the election was “dominated by the immigration issue”, noting that a recent poll “showed that 48 percent of those questioned thought migration was the most important issue facing the country.”

Switzerland’s largest party, the populist rightwing anti-immigration Swiss People’s party (SVP) is set for a record win in the parliamentary election, with media reports projecting it will take a third of seats in the lower house.

Based on final vote counts in half of Switzerland’s 26 cantons, and partial counts in 11 others, the ATS news agency forecast the party would take 11 additional seats in parliament.

That would give it 64 of the 200 seats in the lower house, beating its previous record high of 62 after the 2007 election.

Along with advances made by the centre-right Liberal party, Switzerland’s third-largest party, SVP’s gains should tip the scale from the centre-left towards a centre-right majority.

Opinion polls had suggested SVP would gain electoral ground amid concerns over migration and asylum rules, but few had predicted such a dramatic upswing in Sunday’s vote.

Among the parliamentarians already sure to take a seat is Magdalena Martullo-Blocher in Graubünden.

She is the daughter of perhaps Switzerland’s most controversial politician,Christoph Blocher, the SVP vice-president who served in government from 2004-07 before being pushed out over his extreme positions and confrontational style.

The expected centre-right shift comes after rising numbers of migrants and refugees moving through Europe heightened the focus on the issue in Switzerland, even though the wealthy alpine nation is yet to be significantly affected by the crisis.

“One theme has unfortunately been very dominant during the campaign,” Rebecca Ruiz, a candidate for the Socialists, Switzerland’s second-largest party, told the Swiss broadcaster RTS, saying “people voted out of fear”.