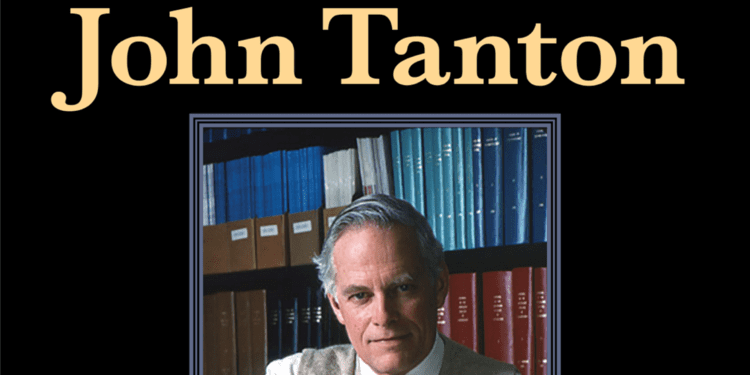 Brimelow Remembers Tanton: “A Citizen Who Took Up Arms For His Country”

VDARE.com Editor Peter Brimelow writes:  My memoir of Dr. John Tanton, who died July 16, has just appeared in the latest, Fall 2019, issue of his quarterly magazine The Social Contract, which is dedicated to his legacy. We’re posting it here with VDARE.com’s trademark hyperlinks.

Sadly, in this issue The Social Contract Editors also announce that “after a thirty-year publishing cycle, The Social Contract quarterly comes to an end with this issue.” We salute everyone involved in this heroic endeavor. Tree-based journalism is tough. We’re happy to say our own VDARE Quarterly is getting back on track after PayPal’s attempted mugging. We hope to provide a home for The Social Contract’s writers and readers in future. Ave atque vale. Shortly after John Tanton’s passing, two New York Times writers, Julie Hirschfeld Davis and Michael D. Shear, published a  book called Border Wars: Inside Trump's Assault on Immigration in which they casually referred to John as “a retired Michigan ophthalmologist and white nationalist.” Of course, on one level this ridiculous smear is just yet more evidence of the bigoted bubble that Ivy League Main Stream Media journalists inhabit. But on another level, it illustrates the polemical ploy used against John, particularly in his latter years, that neither he nor his key supporters were ever able successfully to counter. This was unfortunate in terms of the public debate on immigration, and deeply frustrating to those of us who urged a more radical response. But it was to his credit as a human being: besides being a great man—in terms of his capabilities, courage, and creativity—John Tanton was a gentleman, and a gentle man.

Needless to say, John was not remotely a “white nationalist.” I believe my testimony on this matter must be accepted as dispositive: to adapt Lloyd Bentsen’s notorious attack in Dan Quayle in the 1988 vice-presidential debate, I (no doubt unlike many readers of Social Contract) am prepared to acknowledge that I know “white nationalists” (in the sense of people aiming to defend the interests of American whites—as they are absolutely entitled to do in the era of identity-group politics that the post-1965 immigration disaster is inexorably creating). I regard some “white nationalists” (who, until the 1965 Immigration Act would have been known as “American Nationalists”) as my friends. John Tanton was no white nationalist.

He was, in fact, an environmentalist—genuinely, passionately in love with birds, trees etc. “He thinks the bees are dying,” FAIR’s Dan Stein once told me, exasperated because he wanted John to focus on the latest immigration legislation crisis.

But, unlike many environmentalists, John was deeply rational. He saw that population growth was antithetical to the conservationist cause. Accordingly, he became interested in population control. He decided this required the legalization of abortion and campaigned for it in Michigan—where it lost, in a referendum. But he later told me, to his great credit, that he regretted the U.S. Supreme Court’s arbitrary imposition of nation-wide abortion, because it left the issue unsettled and festering.

In an era of center-right government, John’s interest in population control was unscrupulously invoked by the neoconservative Wall Street Journal Editorial page in a clumsy attempt to stampede conservative Catholic readers against immigration reduction. But now, in the current era of Woke Trump-Deranged Leftism, “white nationalism” has become the smear du jour. Transcending both, John once told me that he and his wife Mary Lou had voted for Patrick. J. Buchanan in the 1992 Michigan GOP primary—because their support for his immigration skepticism, which they had come to share, outweighed his much-publicized Right To Life commitment. But very few are capable of this level of dispassionate discipline.

John Tanton, in Robert E. Lee’s wonderful phrase, was not a professional soldier but a citizen who took up arms for his country. This had both good and bad consequences. Among the good: no professional politician would have selflessly devoted so much time to building organizations that others would get to run, not always gratefully. Nor would a professional politician permit itself (or be capable of) John’s tireless innocent curiosity, which did indeed duly get him into trouble when he strayed into Politically Incorrect areas.

Notoriously among the bad: donating his private papers to the University of Michigan, naively not realizing that his enemies would ransack them for out-of-context quotes in the hope of embarrassing not merely John himself, but also his many trusting private correspondents. (Such as, for example, me. For the record, I thought John’s papers contained nothing embarrassing at all. But he unquestionably gave these enemies yet another opportunity to lie).

John also lacked a professional politician’s thick skin. I remember him being genuinely distressed because some girl had started screaming at him in a Petoskey store about his alleged “racism”—part of the demography-driven collapse of public civility that has subsequently become so common in the Trump years. I told him he should have replied that he’d rather be a racist than a traitor—which is, of course, is what immigration enthusiasts ultimately are. But that idea distressed him even more.

John Tanton was a great quartermaster rather than a great general. He had none of the ruthlessness, even cruelty, of the true battle leader. This was just as well for that boorish girl in the Petoskey store, and certainly made life easier for his numerous colleagues who claimed careers in the movement he built, although I believe it limited its effectiveness in the end.

Accordingly, whereas Lazare Carnot famously became known as “The Organizer of Victory,” because he assembled the citizen armies that defended the French Revolution from external attack, it cannot yet be said what exactly John was “The Organizer” of—because the immigration battle is not yet won, or even really joined.

But he was the Organizer of something. I personally, and generations of Americans yet unborn, will remain deeply in his debt.