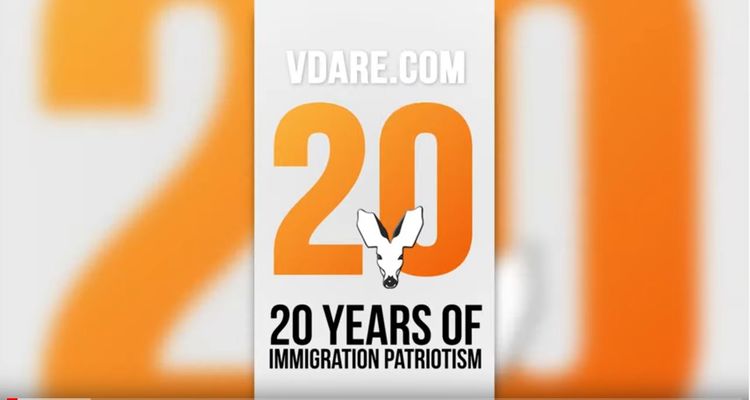 Taki: VDARE.Com Is The Only Place Sticking Up For America—“Take It From Me, I Know!”

On Christmas Eve, 1999, VDARE.com was launched. Now, 20 years later, we celebrate two decades of publishing America First journalism. We are proud to be a voice for immigration patriots, to help fuel the Historic American Nation pushing back against the tyranny of Open Borders, by laying much of the intellectual groundwork Donald Trump’s improbable run to the White House.

This month, we set the challenging goal of raising $200,000 (all donations are tax-deductible!) by January 1, 2020! With just five giving days away from the new year, we are proud to say we are just shy of $50,000 away from reaching our goal!

2020 will be a decisive year for America—and the need for a robust, independent press has never been greater. VDARE.com is the voice of the Historic American Nation. The sole focus of our non-profit is to inform the fight to keep America American. We have never put up a paywall, we do not carry ads because advertisers have been frightened off, we do not have corporate sponsorships, foundation grants, or government support. We only have you.

One individual who has been a great friend of VDARE through the years is Taki Theodoracopulos.

Taki, journalist and playboy, editor and socialite, has been the High Life columnist for the London Spectator for over 40 years. He has written for National Review, The London Sunday Times, and The New York Post, and many others. He is the founder of The American Conservative and the publisher of Taki's Magazine (TakiMag.com). He has played Davis Cup tennis, competed in the Olympics for Greece, and is Judo Champion of the World 70 and Over.

Taki is a force of nature who enlivens political life on two continents. He has outspoken Politically Incorrect views on all the right things. And he was gracious enough to sit down with VDARE TV recently.

As recent events have proved in Britain, the prime concern of most people, and I don’t mean the fashionable elite who make up today’s headlines, is immigration.  And the only people in the last 20 years, who have stood up for the common man, and let’s call him that, are Peter Brimelow, his wife, and VDARE. They are the only ones who dare say what most working-class people think: that illegal immigration is the bane of today’s life, of today’s culture, and the media elite who live behind gated communities are easily swayed by this culture of today of talking about the underdog. But the underdog is the working man. The only one who sticks by them is Peter Brimelow, VDARE, and his wife Lydia, and that’s all I have to say. And take it from me, I know!

With your help, we’ll continue to fight for the American values we hold dear, as the Founding Fathers intended, for ourselves—and our posterity.

Please consider making a contribution. And as always, thanks for reading.