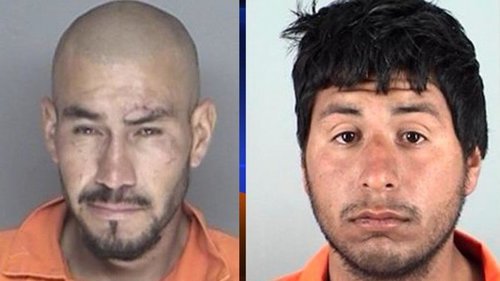 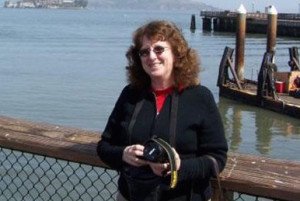 Two “men” have been charged with sexually assaulting and bludgeoning to death Marilyn Pharis, who was asleep in her Santa Maria CA home after working a night shift at Vandenberg Air Force Base where she was a satellite tracker, on July 24. [Two men charged with murder in attack of SM woman, By Kyle Harding, Lompoc Record, August 5, 2015]

In the wake of the infamous Kate Steinle killing, the Main Stream Media focused on the fact that one of the accused, Victor Aureliano Martinez, is an illegal alien with a long rap sheet. But it’s important to note that the other accused (also charged with murder and rape) Jose Fernando Villagomez, is a U.S. citizen only because he was born in the San Francisco Bay Area, moving to Mexico at age three and then returned to the U.S. at age 15. [Second suspect arrested in assault of 64-year-old woman, by Kyle Harding, Lompoc Record, August 5, 2015]He obviously traveled with his mother to Mexico, so we can assume his mother was a Mexican national which makes Villagomez a birthright U.S. citizen—what Ann Coulter has memorably called an “anvil baby.”

Make that a “Birth-Wrong Citizen.”

Villagomez, who was picked up five days after the crime because of an unrelated probation violation and recognized as the other guy in the assault on Marilyn Pharis, is a poster boy for all that is wrong with birthright citizenship. But the MSM has ignored him—as it has ignored the plight of Santa Maria, California, which was a small, middle-class, racially-mixed city in the 1970s, before the immigration invasion of the last 30 years. (Police Chief Blames Immigration, Crime Policies in Death of Santa Maria Woman, KTLA, August 10, 2015)

Santa Maria, about 120 miles north of Los Angeles, is the largest city in Santa Barbara County. In 1970, the population was 32,749. In 1990, the population doubled to 61,284 and now the population is over 100,000, three times larger than it was in 1970. All of that growth is due to Hispanic immigration and U.S. citizen births to immigrants—most of whom entered the country illegally. Hispanics make up 70 percent of the residents of Santa Maria today; 35 percent are foreign-born. [US Census QuickFacts]

Mr. Rivera, a friend of the author, has been an immigration patriot for about 25 years. He is spot on about the cause of illegal immigration in Santa Maria.

Almost immediately after the 1986 IRCA amnesty, illegal aliens started pouring into northern Santa Barbara County, where Santa Maria is located. I know. I worked for the County Administrator and health and social services were my budget units at the time.

Illegal aliens are not eligible for welfare—but their U.S. citizen children are. In the North County area, births skyrocketed. Medicaid funding for illegal-alien-birth-mothers skyrocketed. Child-only welfare cases for birth-right babies skyrocketed. And, as Brenda Walker has pointed out, Santa Maria became the DUI capital of California.

All of this pales in comparison to the devastating effects upon schools in Santa Maria. In the 1992-93 school year, the Santa Maria-Bonita School District (K-8), enrollment was 9,408 and 6,352 (67.5%) students identified as Hispanic. White students made up 24 percent of enrollment. English Learners, those who do not speak English, made up 38.4% of students and two-thirds of the students received free lunch.

Two-thirds of the students do not speak English and 85 percent receive free lunches. Of the 10,162 children who do not speak English, over 9,000 students are Spanish-speaking—and 841 students speak Mixteco, a language of the indigenous people of Oaxaca, Mexico. The children’s parents are illiterate and most do not speak Spanish, let alone English. (Note: all data is from the California Department of Education website.)

White residents moved out of Dodge—because it was either move, send their children to private schools, or let their children rot in the wretched schools in the Santa Maria-Bonita District.

In essence, Americans in Santa Maria voted on the immigration issue with their feet by moving out of what was becoming yet another Mexican colony.

Are these incremental Hispanic students mostly the children of Mexicans? Yes. According to the California Department of Education, 84% of English Learners are Spanish-speaking. The next highest category of English Learners is Vietnamese speakers who make up only 2.3% of the group.

In the spring of 2014, 2,685,793—43 percent—of students in California schools spoke a language other than English in their homes.

And what of Jose Fernando Villagomez? He has, like his illegal compadre, been charged with rape and murder. The District Attorney, Joyce Dudley, is considering whether to ask for the death penalty in the case. She does not care if either one of the accused is an illegal alien.

As for Villagomez, who is a US citizen, he has not yet been convicted of a felony. He probably cannot read or write but someone can help him with a mail-in ballot. We are told that Mexicans have good family values, so he must a natural Republican, right?

Why doesn’t the ¡Jeb! campaign find him in the county jail and register him to vote?

Linda Thom [email her] is a retiree and refugee from California, now living in Washington State. She formerly worked as an officer for a major bank and as a budget analyst for the County Administrator of Santa Barbara