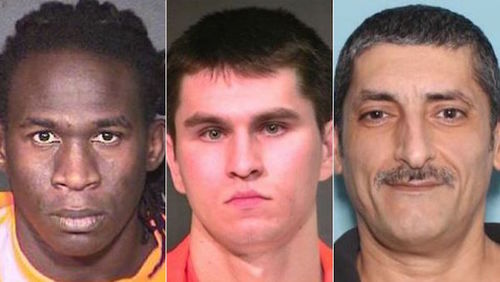 Above, a Sudanese, a Russian and an Iraqi walked out of a prison — that would be (l-r) Musa Salah Abdelaziz Abdalla, Dennis Valerievitch Tsoukanov and Nasser Hanna Hermez. All have lengthy criminal histories but were released by ICE anyway.

On Tuesday, Pinal County Sheriff Paul Babeu held a press event to draw attention to the continuing release of violent illegal aliens onto American streets. He chose three diverse characters as examples to demonstrate how little our government cares about the citizens’ safety.

Terrible crimes are occurring because of liberal weakness toward illegal alien criminals. On July 1, Kate Steinle was shot to death in San Francisco by a five-times-deported Mexican drug dealer who had not been repatriated. Marilyn Pharis, an Air Force veteran, was attacked in her Santa Maria CA apartment on Jul 24 by two men, one of which was an illegal who had been released rather than deported.

Yesterday I reported on illegal alien Francisco Chavez who beat a two-year-old girl nearly to death, who nevertheless was released by San Luis Obispo authorities on bond and unsurprisingly didn’t show up for his court date.

Americans pay billions of dollars in taxes to support a system of police, border security, courts and prisons. It’s therefore reasonable for us to expect a first-world level of public safety, but we’re not getting it. Why are illegal alien criminals treated with such deference?

Sheriff Babeu had two crime victim relatives with him to speak, the mother of Brandon Mendoza and the father of Grant Ronnebeck.

Here’s a local news report from Fox 10 in Phoenix:

An Arizona lawman blasted the federal government Tuesday over an Immigration and Customs Enforcement policy he said sprang criminal immigrants on the law-abiding public.

With the loved ones of crime victims at his side, Pinal County Sheriff Paul Babeu spotlighted three criminals, including a Russian national who set a police informant on fire, an Iraqi who killed his two-year-old daughter and an illegal immigrant from Sudan who has committed multiple assaults in two states. Babeu said ICE set all three and hundreds like them free in communities such as his, and that even its new “Law Enforcement Notification System,” designed to let local authorities know of pending releases, is too little, too late.

“You don’t have to be a sheriff to realize that this is going to end very badly for people,” Babeu said. “You don’t release murderers into the state of Arizona and somehow think that they are just going to go about their business and try to find a job.”

Babeu said immigrant criminals should be deported after completing prison sentences, especially when they have shown a propensity for violence. The three criminals, who Babeu pointedly noted were not from Mexico, were all released in Arizona in the last week.

– Musa Salah Abdelaziz Abdalla, 34, of Sudan, who has had multiple arrests for assault in Texas and Arizona. Abdalla violated probation three times and was sentenced to 13 months in prison in June 2014. Last month, he was released from prison and turned over to ICE officials, who then released him into the public on the same day claiming they could not locate travel documents proving his citizenship in Sudan.

– Dennis Valerievitch Tsoukanov, 33, of Russia, who along with two accomplices, kidnapped, beat and stabbed a police informant before pouring gasoline on him and setting him on fire in 2001. After testifying against his accomplices, he was given a 13-year sentence. Tsoukanov was released on Dec. 21, 2014, and turned over to ICE. He was released last month after ICE once again could not locate his travel documents.

– Nasser Hanna Hermez, 46, of Iraq, was charged with second-degree murder of his 7-week-old daughter in 2009. He pleaded guilty to negligent homicide and received a six-month prison sentence and three years’ probation. He was arrested in April for burglary, and sentenced to another two years’ probation. ICE released Hermez, citing his status as a legal permanent resident.

Babeu’s news conference was the latest event showing the growing rift between local law enforcement and ICE. Sheriffs and police chiefs across California and Arizona have previously complained that while ICE routinely asks departments to hold prisoners until they can take custody of them for deportation, the local law enforcement officials believe doing so will expose them to lawsuits. They cite court cases including the March, 2014, U.S. Court of Appeals for the Third Circuit ruling in Galarza v. Szalczyk that held states and localities are not required to imprison people based on ICE “detainer” requests, and that states and localities may be held liable if they participate in wrongful immigration detentions.

“Our system is broken,” he said. “Our laws don’t apply, it appears, to these individuals when it comes to immigration and our process. What the sheriffs have said unanimously in the state of Arizona, what I am calling for the president, the United States Congress, to do, is to fix this immediately.”

The sheriff also proposed that the State Department deny visas for diplomats from countries where criminals here illegally are originally from.

In a statement provided to Fox News, ICE said its hands were tied in the cases Babeu raised.

“U.S. Immigration and Customs Enforcement (ICE) under current law can no longer legally hold the three individuals,” ICE said in a statement. “To further promote public safety and transparency, ICE notified local law enforcement agencies of the release of the individuals.

“To be clear, the backgrounds of the individuals in question would generally make them enforcement priorities for ICE. However, ICE has no legal basis for continuing to hold these individuals. One individual (Hermez) is a lawful permanent resident whose current conviction record does not make him legally removable.”

Babeu said his brethren in the Arizona Sheriffs Association agree with him, and cited a statement from the group, of which he is vice president.

“The sheriffs of Arizona have been forced to deal with many challenges due to lax enforcement of Criminal rules for U.S. immigration policies,” read the statement. “We appreciate ICE finally starting this notification, yet it places all law enforcement in untenable position by not being transparent and notifying the public we are sworn to protect. These bureaucratic excuses that these dangerous foreign criminals may not be returned to their country of origin since they lack travel documents are not acceptable. We demand that these criminals be deported from the U.S. and back to their home country. By simply notifying sheriffs of the release of dangerous criminals doesn’t address the core problem that these dangerous criminals remain in America.”

Babeu also had the family of two victims whose loved ones were killed by violent illegal immigrants criminals in Pinal County.

“There is not any guarantee that law enforcement will be contacted on every one of these cases,” said Mary Ann Mendoza, whose son Brandon was killed by an illegal with a criminal history while he was a sergeant in the Mesa Police Department. “There’s no way that they (law enforcement) will be notified for everyone released. It’s a joke.”

Steve Ronneback, whose son Grant was killed by an illegal immigrant criminal while working at a convenience store, shared Mendoza’s sentiment.

“We have a serious problem,” he said. “Are they going to notify everyone that there’s a danger living just next door? I don’t think so.”