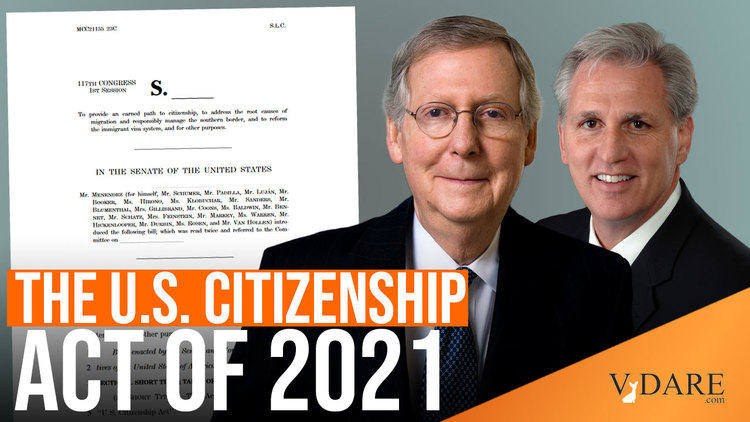 Our nation has been locked down for nearly a year because of the China Virus. Millions are unemployed, tens of thousands of small businesses have shuttered, and untold numbers of lives have been ruined because of the consequences not of the Coronavirus, but the deleterious attempt to stop its spread.

At a time when the CDC urges wearing two masks to combat the spread of COVID-19 and further lockdowns, the Biden Administration is preparing to erase the US-Mexico border and grant amnesty to potentially 20 million illegal immigrants.

Oh, and the Biden-backed immigration bill would invite those illegal immigrants deported during the Trump Administration to come back to the United States and also receive amnesty.

Biden-backed immigration bill to let deported back in and amnesty for 20M, by Paul Bedard, Washington Examiner, February 18, 2021

A new Democratic immigration package backed by President Biden is already coming under fire because it would extend amnesty and citizenship to nearly 20 million immigrants, a population five times that of Los Angeles, and even extend an invitation to return to those recently deported.

And coming as millions remain out of work and with the nation still trying to end the coronavirus pandemic, it threatens the livelihood and safety of border states, said other critics.

“This latest move would only further harm American workers already struggling from our health and economic national crises caused by the ongoing pandemic and our government's response. This new immigration bill will damage America’s safety, weaken our economy, and endanger our freedoms,” said Heritage Action Executive Director Jessica Anderson.

She said the plan would greenlight about 20 million immigrants on a path to citizenship.

Biden's open-door plan has already sparked a new surge of 3,500 illegal immigrants to the border daily, according to immigration officials.

The Democratic plan leaked around Washington is being sold as a humane revision of Trump’s policies that cut visas, increased deportations of illegal immigrants, and, with Mexico’s, help put southern immigrants seeking asylum in line instead of crossing and hoping for the best.

We here at VDARE.com have argued what the Biden Administration is doing with regards to neutering ICE and inviting the massive “Biden Surge” of illegal aliens at the US-Mexico border is tantamount to treason, and should be greeted by Republicans with an immediate push to impeach both Joe Biden and Kamala Harris.

With the impact of the China Virus still ravaging large sections of the US economy not named Amazon, Walmart, Target, Apple, Facebook, and Google, and millions still unemployed, granting citizenship to 20 million illegals is just another form of warfare by our elite against the Historic American Nation.

With this bill, backed by the Biden Administration, comes the opportunity for a Republican leader to emerge and position the party as firmly behind the American people and the Historic American Nation.

Two words from this individual could change the game and position this immigration bill and the Biden Administration as the treasonous villains they represent (and the existential threat this bill poses to our nation and our posterity): immigration moratorium.

This isn’t about illegal immigration anymore. All illegal immigrants should be deported without question, and any politician advocating for amnesty should be immediately recalled and charged with sedition/treason.

This is about ending legal immigration during a global pandemic (originating in China), so the American people can emerge from this crisis secure in knowing their elected leaders didn’t elect a new people via mass amnesty and the continued importation of millions of legal immigrants each year.

The American people yearn for a voice in this fight: what member of the GOP will emerge as their champion?