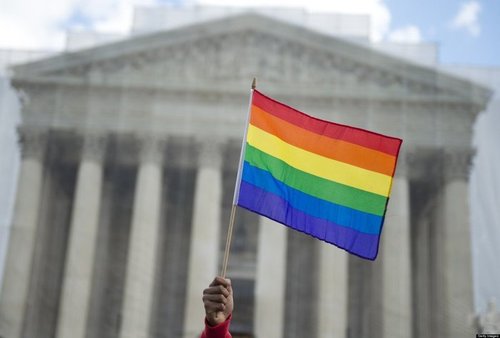 There are some issues that raise deep passions, that drive the best minds of our age to profound reflections upon the ultimate basis of human society. And one of those, apparently, is New York City’s rent control laws. As a character in Bonfire of the Vanities remarks, “Nobody in Sicily hates anybody as much as a rent-controlled landlord hates his tenants.” Not surprisingly, then, today’s hoopla over gay marriage traces back to a Bonfire-era dispute over who benefits from the rent control on a snazzy apartment on E. 54th St.

Here’s the lead of Andrew Sullivan’s 1989 article making the case for same-sex marriage for the first time in a prominent American journal. It argued for a principle that few found compelling at the time but that most now endorse.

And here’s the opening of Sullivan’s August 28, 1989 piece in the The New Republic:

A (Conservative) Case For Gay Marriage

Last month in New York, a court ruled that a gay lover had the right to stay in his deceased partner’s rent-control apartment because the lover qualified as a member of the deceased’s family.

By PHILIP S. GUTIS, Special to The New York Times

ALBANY, July 6— New York’s highest court today expanded the legal definition of a family, holding that a gay couple who had lived together for a decade could be considered a family under New York City’s rent-control regulations.

Daniel Seligman wrote in Fortune a couple of weeks before Sullivan’s epochal essay:

ALL IN THE, ER, FAMILY

Perplexities abound when you ponder the instantly famous ruling just issued by the New York Court of Appeals. For openers, how do you parse the lead sentence of the ACLU press release enthusiastically exegetizing the ruling?

Loopy lead: “In a landmark ruling for lesbian and gay rights, the [court] ruled . . . that a gay man could be considered a family member of his deceased lover.”

Perplexity No. 2 is the suddenly unsettled question of what a family is. That question got to be burning in the Big Apple because of the city’s rent-control laws, which have long allowed resident family members to continue expropriating the landlord’s property rights upon the lessee’s death. In deciding that lovers without wedding licenses were now entitled to get in on this game, Judge Vito J. Titone derided notions of familialism based on “fictitious legal distinctions or genetic history.” What really mattered, he said, was a long-term relationship “characterized by an emotional and financial commitment and interdependence.” Noble fellow, eh? But how will the rent-control bureaucracy gauge the emotional [commitment level]?

The deeper meaning of rent control is luckily less elusive. Here we come to an angle totally missed by the media pundits in analyzing the Titone decision. The apartment in question is a one-bedroom job at 405 East 54th Street — one of New York’s most upscale neighborhoods; it would command something like $1,800 a month if rented in a free market. (We are indebted for this estimate to a local real-estate mogul who recently occupied an identical apartment in the building.) The gay couple paid $650. So the landlord was effectively giving them $1,150 a month, which translates into a lump sum of maybe $175,000. New York tenants get these deals because the kindly legislature wished to prevent “uncertainty, hardship, and dislocation.”

Students of rent control will already know how the story turns out. It seems that the “deceased lover” was Leslie Blanchard, a star of the local hairdressing scene. Having searched through 48 Nexis stories on Leslie, we depose that he was a big operator. He was Barbara Walters’s exclusive hair colorer. He appeared on talk shows. He had his own salon, as well as a hair-coloring company licensed to Richardson-Vicks. He owned horses. He had an estate in New Jersey that was featured in Architectural Digest. He was interviewed by the New York Times on which kinds of weekend guests were pleasant and which kinds were a pain. Demonstrating anew the depravity of rent control in New York, he left an estate of around $5 million and a landlord who can only gnash his teeth about the injustice of it all. Or maybe he should call the ACLU.